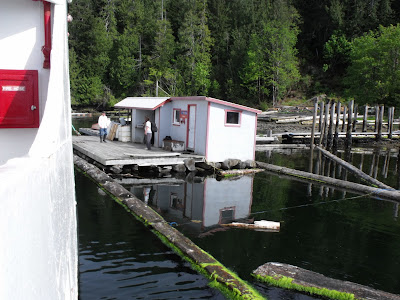 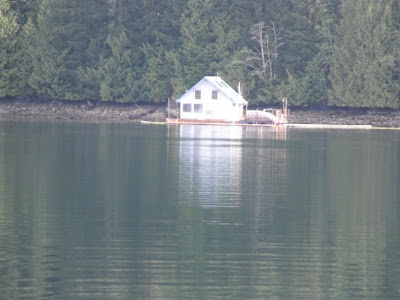 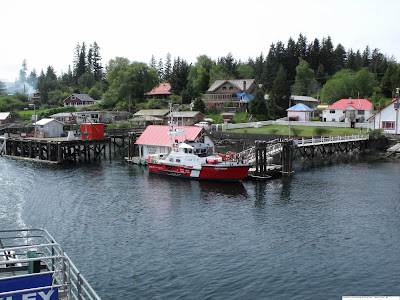 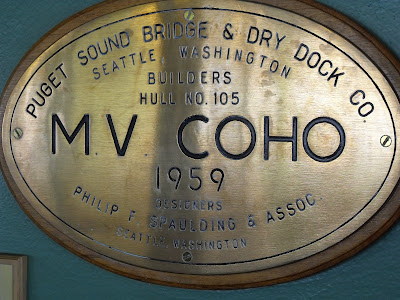 Valcourt to Vancouver and so much more. 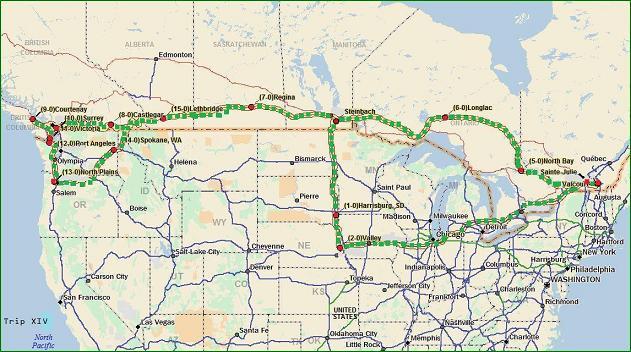 ____DAY 1: South, out of Steinbach, on a Sunday morning with the red cedar bark mulch bound for Harrisburg, South Dakota. Crossing into the US at Pembina, North Dakota and onto the Interstate 29 all the way to Sioux Falls, a stones throw away from my delivery. At the Flying J truckstop is Bob from Kelowna in C601, also with bark mulch. He was the last of eight to get unloaded at Castlegar when I was first away. This is his first trip into the US for BFS, so far he is unimpressed.
____DAY 2: I'm in the right street, but I'm damned if I can find out who wants the bark mulch. Eventually I track it down to the Ready-mix Concrete plant, who unbeknown to some of the staff, are branching out into landscaping with slabs and mulch. While I'm reversing back down the road to get in the plant, I carelessly knock over another factory's mailbox at the kerbside; right in front of the company boss who has just turned up for work. I say, "Sorry". He says, "Don't worry about it, if that's the worst thing that happens today then we'll be fine, I'll send someone out to fix it, I hope it didn't rip your tarps." I quickly decide that I like this guy; if I was a woman, I would offer to have his babies. Unloaded, I wait for instructions at a gas station back at the Interstate. At four in the afternoon, the reload arrives, trailer change in the morning at Valley, Ne; lampposts going to Ste. Julie, Qc. 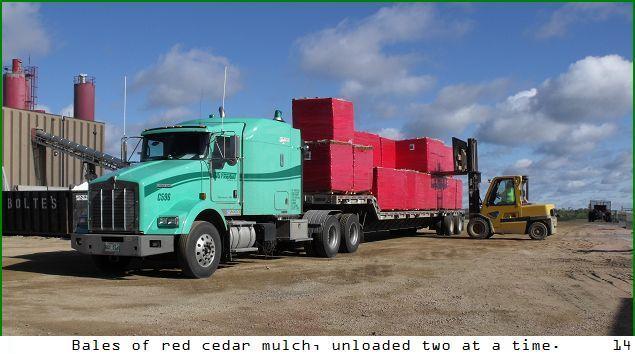 ____DAY 3: The satellite message was addressed to Bob and Chris and I find two trailers, loaded with 10 lampposts each, both going to Quebec, but no sign of Bob. I've strapped down the load, faxed the customs papers and cleaned myself up; but at 10.30, still no Bob. Being his first journey back through customs into Canada, I thought he might like to run together. But as he had plenty of time to do the same as I did, I figure he ain't coming. You can only drive the one behind the one in front. I'm already thinking about making myself available for reloading on friday morning so I push on to Sawyer,Mi.
____DAY 4: The lampposts only weigh 30,ooo lbs and the truck holds top gear all the way on a very flat 1,300 mile trip. The steepest incline being the ramp onto the Bluewater Bridge at the Port Huron/Sarnia border crossing north of Detroit. The Greater Toronto Area is experiencing a thunderstorm as I go through on Highway 401, amazingly everyone keeps it together and I make it to Napanee under ever threatening skies. 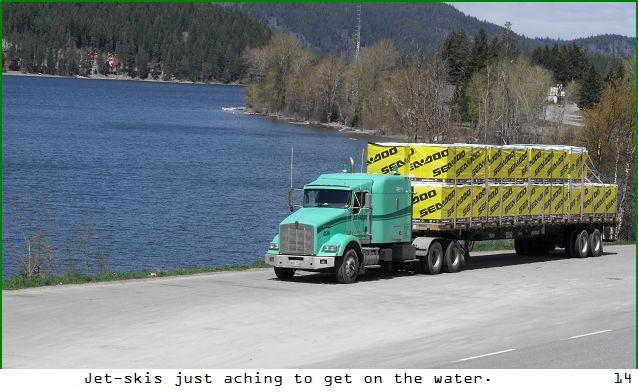 ____DAY 5: French-Canadians delight in being different; speaking French differently and doing most things in their own quirky way. Having a long rich heritage and passing traditions down through the generations is fine, but a lot of Quebecois seem to enjoy being bloody awkward when it comes to strangers. Many truck-drivers just don't want to run east of Ontario, simply because of all the hassle. But doesn't that all change when you have something they want? Urgently. At a place, where before I had been parked in a corner and ignored, I'm waved into position, straps pulled off and unloaded in under twenty minutes, all in the pouring rain. A guy even comes up and asks, in English, where the other truck is. "Demain matin", I reply in French, I've heard that one enough times over the years when trying to get unloaded.
____DAY 6: In this job, you have to kiss a lot of frogs before you get a chance to stick your tongue down the throat of a Princess. I can count on the fingers of a Vee sign the number of trips I have done of more than 3000 miles. But Vee is for Valcourt, Qc, 3174 miles to Vee is for Vancouver Island. Sixteen jet-skis and 2 three-wheel spyder motorcycles, loaded by 9 o'clock and a good days driving to North Bay; catching both Montreal and Ottawa at there traffic-free best.
____DAY 7: Highway 11 through the Canadian Shield and a chance to see some wildlife; dissappointingly, it's a dead Black Bear, a roadkill victim. One live moose and two foxes in 1000 kilometres to Nipigon; where I dine with Neil and Neal, one current and one former driver of sewer green Kenworth T800s. Most of the ex-pat British drivers in eastern Manitoba keep in touch via Facebook; but it's always good to sit down face to face and gossip. Find out who did what, where, why and how much they were fined. 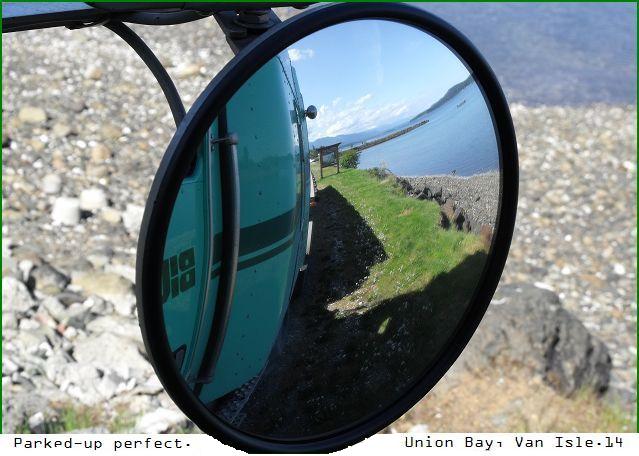 ____DAY 8: An early start, not the usual thing on a long trip when even if you drive all day you are not going to make up much time, but I'm going to be home in my own bed for the night and the jet-skis can have the security of the BFS electric entry-gated, video- camera watched, floodlight compound.
____DAY 9: Regina is the first drop, just one machine, then the Trans-Canada highway onto Medicine Hat, Ab. Time to plan ahead and with a log hours reset seemingly inevitable, I decide to push on with the drops as quickly as possible, leaving more time for myself on Vancouver Island.
____DAY 10: Today is all Highway 3, Lethbridge, the Crowsnest Pass, Cranbrook and to Crescent Valley, just north of Castlegar, BC. 15,ooo lbs of big boys toys doesn't slow the rig too much as the ups and downs of the Rocky Mountains are splendid in the sunshine. 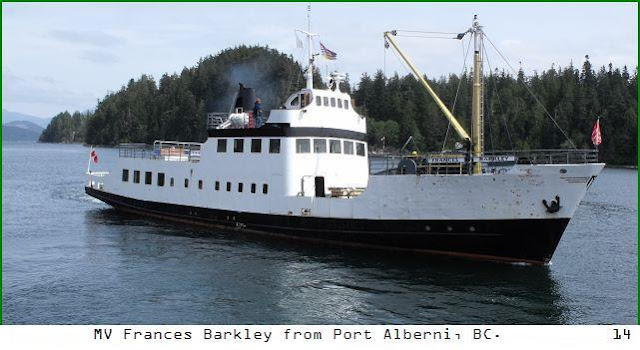 ____DAY 11: Osoyoos, for fuel and a shower at the Husky Truckstop. A town by a lake and in the mountains, quite beautiful, but I could never live there. Not with a name like that, I remember when I lived in Ware, Hertfordshire; always having to repeat myself. Two drops close together at Aldergrove and Surrey, a traverse of Vancouver City in the evening rush, then Highway 99 towards Whistler, a road extensively worked on for the 2010 Olympic Winter Games and my first chance to use it without endless roadworks as I head for my last mainland drop at Squamish,BC.
____DAY 12: Manitoba time is two hours ahead of BC time, so when the dealer opens at 9.00, I'm thinking 11.00 and half the day is nearly gone. Things get better at the ferry terminal at Horseshoe Bay when I barely have time to switch off the motor and I'm called forward onto the 10.30 crossing. Ninety minutes of smooth sailing and I'm off into the hustle of a very busy Nanaimo looking for the Cam-Am dealer. Next, an hours drive north to Courtenay and the last four Jet-skis arrive at their new home. Where to take a break? Port Alberni; and just before the town I stop at the awe-inspiring Cathedral Grove, the biggest trees I've ever seen. At the biggest tree in the forest, a young lady in a party dress is having a photo-shoot to celebrate her college graduation. I need some perspective to show how huge the trees are in my photos, she gladly obliges; such finery in the forest.
____DAY 13: Friday,on the Quay at Port Alberni, I book a day trip on a boat and am assured I will see whales, orcas, sea lions and sea otters. It leaves at 08.00 Saturday morning, returning at 17.30. I spend the rest of the day, at the dockside, watching the loading of a freighter. Cedar tree trunks are floating in the water beside the ship, being nudged about by sturdy little tug-boats while a dozen men are walking about on the logs, putting slings around the wood and then standing to one side as it is craned aboard. 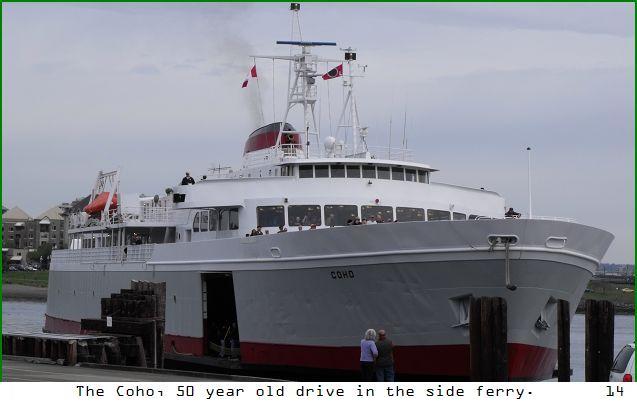 ____DAY 14: The most important rule in whale-watching is that the boat must not go within 100 metres of any whale. During my time on the MV Frances Barkley, I don't think it was ever within 100 miles of any fucking whale. But it was a bit out of season, the northern migration past Vancouver Island is best seen during March and April. Also, I was on a working boat that carries mail, cargo as well as passengers and tourists; it doesn't go chasing after the whales. An interesting day, even with the no-show sea mammals, we called in at Canada's last floating Post Office, delivered some fish-food to a salmon farm, dropped off some Vicwest roofing to a new holiday home and a whole load of groceries and house-hold goods to some of the alternative life-style types who live by the Alberni Inlet and the Pacific Rim waypoints.
____DAY 15: An early Sunday morning drive down into Victoria, the capital of British Columbia, where I find the Black Ball Ferry Terminal right next to the Parliament Buildings in the centre of Downtown. I'd booked a space on the 10.30 sailing to Port Angeles in Washington state. A direct route into the USA, possible because I was empty, convienent because I was reloading in North Plains, Or; $40 cheaper than BC Ferries and they take debit card payments. Built in 1959, the MV Coho has sailed the same route under the same flag for over fifty years, but it is very clean and tidy with a nostalgic aire. Every piece of metal looks like it's had two dozen coats of paint and the driving through a door on the side, using a 10 foot wide dock leveller was a first for me. Just two 18 wheelers, some cars and a huge host of Harley-Davidsons; many making a roadtrip on Highway 101 which starts its legendary southbound route to Los Angeles from Port Angeles. I 101'd it to Olympia, Wa, then Interstate 5 to Portland,Or before going east to my pick-up.
____DAY16: A load of top quality lumber, destined for top quality window frames and I don't mind tarping it when you can see the point. Then one of my favorite Interstates, 84, east out of Portland and along the south bank of the mighty Columbia River as the gorge teases you with glimpses of spectacular Mount Hood. Oregon on the south, Washington to the north, crossing at Umtilla. Onto Spokane, home of Martin Penwald's ex-wife, she must have got the kids off her hands by now, I wonder if she's still on her own.
____DAY 17: A three thousand mile trip and I was only scaled once, within 30 miles of the last drop. There is something about this run, back through the Rockies, all the scales seem to be always open. Sure enough, I equal my previous best, five in a row. Not a problem, all axles are good, but it sure makes the log-book look neat and tidy. I figure I need to get back to the Hat, to give me a chance of making Steinbach by the next evening. Didn't I say? The window company is only half a mile up the road from where I live.
____DAY 18: Wednesday, the load is booked in for 07.30 Thursday, so it's just a job of keeping it together, nursing the trailer tyres on this year's hottest day so far. There are a couple that look like they haven't got another three thousand miler in them.
____Overall Distance:- 11,770kms.
Posted by chris arbon at 7:29 PM No comments: 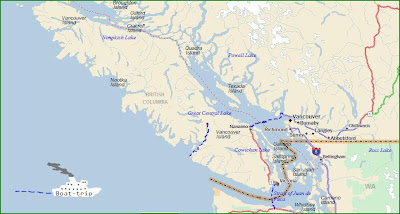 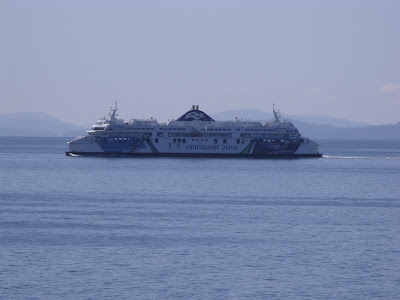 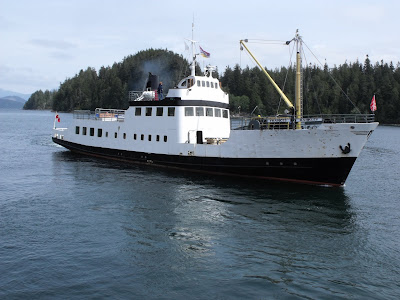 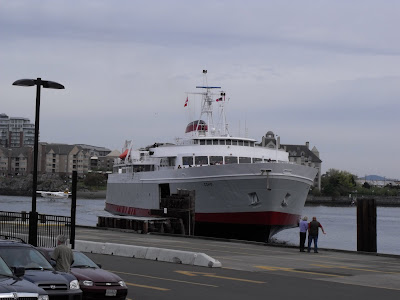 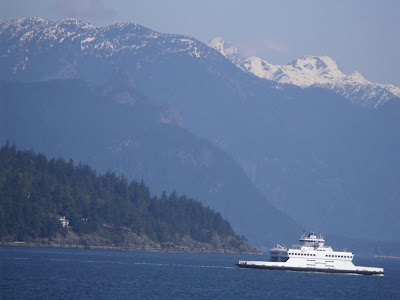 Posted by chris arbon at 8:38 AM No comments: 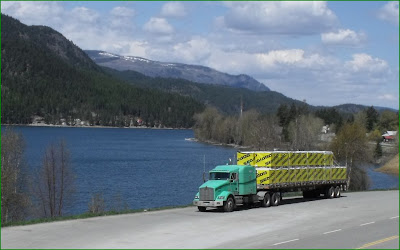 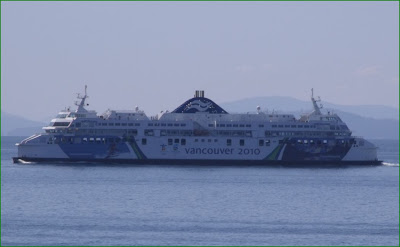 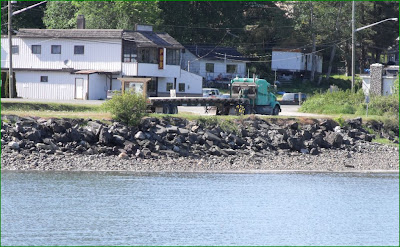 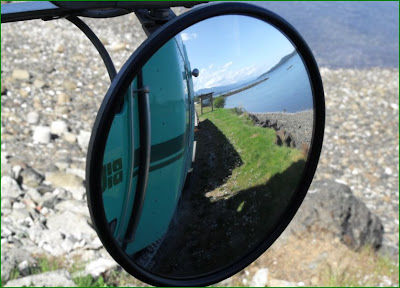 Posted by chris arbon at 6:51 PM No comments:

Third:----Union Bay: parked on the beach in front of the pub.

Fouth:---Blind Spot Mirror; a sight for sore eyes.
Posted by chris arbon at 6:38 PM No comments: 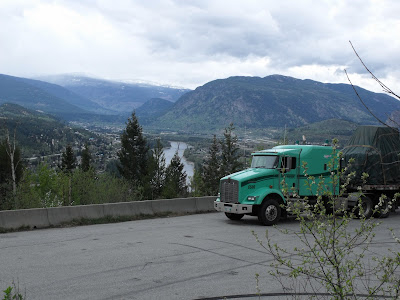 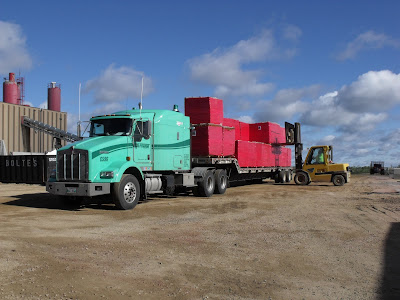 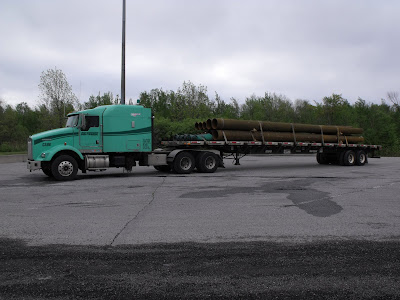 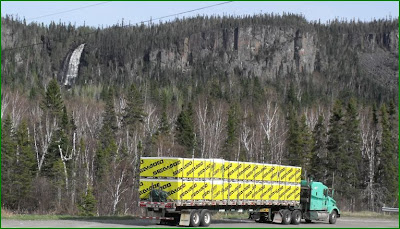 Posted by chris arbon at 8:26 PM No comments:

Top:----The Kootenay River from high above Castlegar, BC.
Second:-Red Cedar Bark Mulch being unloaded in South Dakota.
Third:--Lamposts, 10 on the trailer, 1 through the cab roof.
Fourth:-Cascade at the Palissades in Northern Ontario.
Posted by chris arbon at 8:20 PM No comments: