____ A Tuesday afternoon departure with a load of the big cardboard tubes; a load I had not done for several years. A multi-drop run starting at Des Moines, running down to Ottumwa and finishing-up just outside Cedar Rapids on Thursday afternoon. The reload was less than 20 miles away and I made it through to  Iowa 80, the World's Biggest Truckstop, for an evening of browsing chrome. Onto Mississauga for a trailer switch; then back to Iowa with four drops of agricultural machinery parts. All delivered on Monday morning before hacking through to the centre of Chicago for a load of plastic. Back to Winnipeg whilst rolling over the driving hours and getting home on Wednesday lunchtime.

Plenty of Empty Miles in a 6000 Kilometre Week. 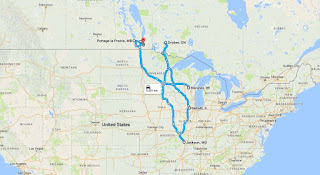 ____ A Monday morning departure; west to Portage La Prairie for a load of oats that was destined for a Tuesday evening delivery appointment at Manawa in Wisconsin. Then a nine hour haul up to Dryden in Ontario with the empty trailer. A quick swap for a loaded trailer of pulp and I was off down the narrow Highway 502 again. Across into the States at International Falls before due South to Jackson, Missouri. Friday afternoon before I got unloaded but the office had a Saturday lunchtime trailer switch for me at De Kalb, back to Illinois and homeward bound. Back into Canada with just a couple of hours left of my weekly 70 allowance. Just enough time to drop the trailer in Winnipeg and bobtail home.
Posted by chris arbon at 8:35 PM No comments:

____ When I heard it was a trailer from Dryden, going to Wisconsin, I thought I was in for another poor paying, low mileage week. But things looked better after I had delivered to Rhinelander and got a reload of glass from Spring Green heading East. The familiar busy route around the bottom of Lake Michigan and across to the Ambassador Bridge that joins Detroit to Windsor in Ontario. An early delivery appointment at Vaughan where I was able to park on the unloading dock overnight. From there, I had all day Thursday to get to Drummondville in Quebec; not that there was an hurry. The load wasn't ready until 3 o'clock on Friday afternoon. The trip had been beset by traffic hold-ups from the start; road works and catching the rush-hours and it didn't let-up. A road closure due to a fatal accident had me sitting for three hours just east of Sault Ste Marie as I made my way back into the States. Crossing the Upper Peninsula of Michigan and onto Roseau in Minnesota for a Monday morning tip before heading,empty, back to Steinbach. 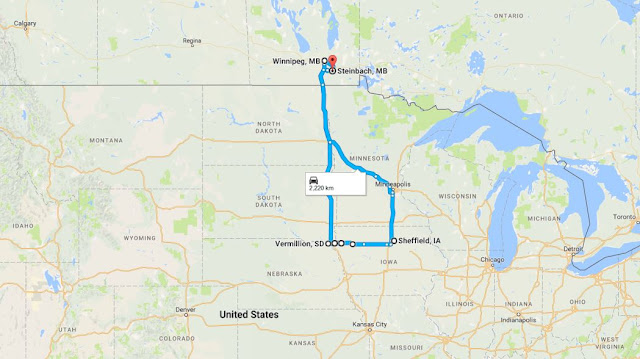 ____ It wasn't Wisconsin again, but I can't say I was happy to hear I was going to South Dakota. Vermillion is south-South Dakota but not even a full days drive from Steinbach. Something East into Ontario was the preferred reload direction but I only went as far as Sheffield; to load agricultural parts for Winnipeg. Back home inside three days. Not really my sort of work. I need more miles!
Posted by chris arbon at 10:49 PM No comments: