____Day 1: Overnight temperatures of -18 Centigrade and a fresh layer of snow greet me as I leave on a Saturday morning. Also, trailer D52 has been left with a blown-out tyre. Not the best way to start and things get no better when I find central Minnesota is under a Winter Storm Warning. My first chance to see how the Peterbilt handles on hard-packed snow and ice. It has a shorter wheel-base than the old green Kenworth, but handled just as well; having 20 tons of cargo helped. Eventually, I made it to Wilson; cutting the 1000 mile trip in two.
____Day 2: Someday, somewhere at some boring dinner party, someone will say the word "Kalamazoo" and I will pipe up with; "Been there, delivered a load of peat-moss." The same as I do with, "Bill Clinton went to Oxford? I went to Oxford; delivered a load of sugar to the Co-op." But when I park-up overnight at my delivery point; I find nothing distinctive in the town except it's name.
____Day 3: It's the week of the big Thanksgiving holiday in America and everything needs to be done before Wednesday afternoon. The peat-moss is off the trailer by 9 o'clock but the re-load from Fort Wayne, Indiana, isn't going to be ready until Tuesday. But I do have the satisfaction of knowing that the office has found something for Winnipeg; so it's a leisurely 120 mile drive down to the Fort Wayne Truck Plaza and an early finish.
____Day 4: Fifteen minutes to load 15 hot-tubs; shut the doors, ask the nice lady in the office to fax the customs papers and I'm on my way home. But not before I have wandered around the warehouse and picked out my all-time favorite hot-tub. Half swimming pool, half hot-tub. 24 foot long x 8 foot wide, 4 foot deep; seats and jets up one end and at the other: water flows in and you swim against the current. I think Master Spa are onto a winner; serious exercise combined with serious fun. Onto Hasty for the night, meeting up with Mr. Ramsden at South Beloit and running back in convoy.
____Day 5: A foggy start; waiting for daylight seemed to have been a good idea as plenty of vehicles littered the grass verges of Interstate 94; all the way to Fargo. At the Stamart Truckstop, they have a new brand of winter diesel and reading the blurb on the pump; I decide to try it. Yukon Diesel should be just the stuff I need as I head north into the icy waste land that is Manitoba. No additive necessary and only two cents more expensive. Only thing..... by the time I get back to the yard: Manitoba is enjoying afternoon temperatures of plus 14 centigrade. Almost unheard of in late November.
____Overall Distance: 3669 km.

Posted by chris arbon at 9:11 AM No comments: 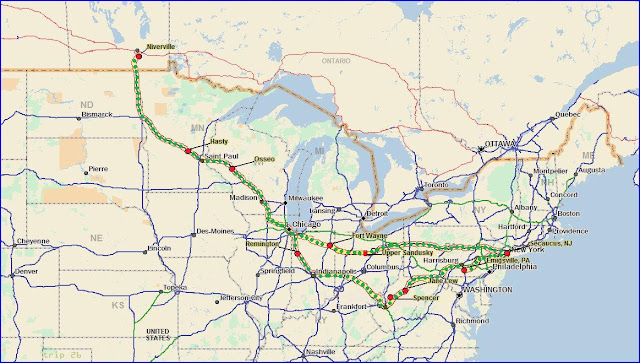 ____Day 1: The eleventh of November, a public holiday and the biggest line of cars that I have ever seen at the US border. I follow Neal Trickett, in Flying Eagle #24, down the hard shoulder as we go through the deserted commercial vehicle checkpoint. Neal is heading for Georgia; my load is for New Jersey, both for delivery early on Monday morning. I make a comfort stop at Hasty, but I catch up and am right behind Neal's shiny new trailer at the off-ramp to Osseo. At the red light, I see a sticker; "Let Jesus carry your Load." Not a Flying Eagle trailer; lost him.
____Day 2: Few trucks on the road as I cross Chicago with the 20 tons of lentils destined for a cannery on the Eastern Seaboard. Like many truck-drivers who did Commie-bloc and Middle-east trips, I'm a big fan of canned food. Lots of variety, sturdy packaging, no eat-by dates; living out of a tin never did me no harm. Camion Stew Rules. Two-thirds of the trip done by the time I park-up at Upper Sandusky.
____Day 3: Ohio done; three hundred miles of Pennsylvania and a lot more trucks on the road. Chronic bunching on the rolling hills of Interstate 80; an indication that more US fleets are limiting their trucks to 65 mph as diesel soars to well over 4 bucks a gallon. A Sunday afternoon to prove that car drivers go as fast as they want: truck-drivers go as fast as they can. On to Secaumus and a parking spot in the road outside the factory; as recommended by Bryn, pilot of Flying Eagle #18.
____Day 4: Soon unloaded and on my way through the rush-hour, to my first pick-up. Emigsville, 186 miles westwards in Pennsylvania. A collection of 44 computer desks for a school in Gimli, Mb. Then, south-west, across Maryland and into West Virginia. Finishing at an independent truck-stop at the strangely named "Jane Lew."
____Day 5: Seventy miles to go and all of it through isolated communities in the Appalachian Mountains; some of the poorest places in the US. The twisting, turning Highway 33 following the floor of steep-sided, thickly-wooded valleys, copper-carpeted in fallen leaves. Sporadic meadows with shabby habitats, the smell of wood-smoke in the early morning rain. You can almost taste the moonshine, hear the banjos. Eight stacks of 8'x4' rubber mats from Spencer, going to Winnipeg. Loaded and with Steve Earle on the stereo: orders to head for Chicago as the office searches for two more pallets that will fill the trailer.
____Day 6: A late start from Remington, Indiana, giving the office more time to find some cargo but also letting me miss the Chicago rush-hour. Eventually I get the call to "Bring it home." Pushing on to Hasty as the temperature plummets. Time to get out the Tri-Pac instruction manual and find out how to make it warm the cab; as opposed to it's summertime cooling duties.
____Day 7: The familiar final run; Interstate 94 to Fargo, turn right, Interstate 29 to the border. Now a snow covered flat land. Back to the yard, with the trailer going for deliveries with the city truck. Back home by late afternoon.
____Overall Distance: 5892 km. 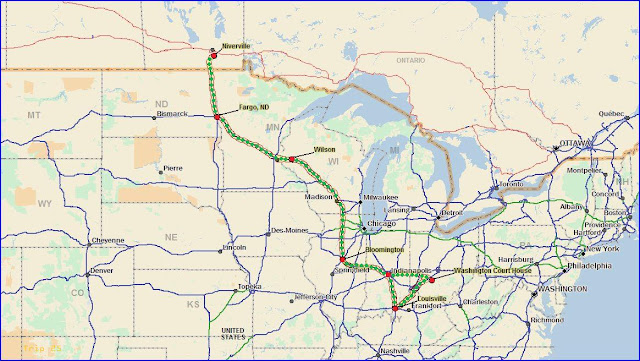 ____Day 1: November is the month when the snow-chains should be back on the truck. But with such a heavy load of flax-seed; I postpone their carrying in favour of a few extra gallons of fuel in the tanks. There are no mountains on the way to Ohio and the strange-named town of Washington Court House. As far as Wilson in Wisconsin for the first night of the trip.
____Day 2: The second day of driving into a strong wind from the south, but at least it is a warm wind. Wind is also a problem in the truck-cab; the annoying shituation of not knowing if it's a Horse'n'Cart or a Pony'n'Trap. Stops and starts all the way to the Indiana/Ohio border and the Stateline Petro at New Paris.
____Day 3: Flax-seed for the pet-food factory that has a yard full of Wal-Mart trailers and then south-east on the nearby Interstate 71. One hundred and sixty miles, through Cincinnati, to Louisville on the northern edge of Kentucky. Another heavy load, this time; bags of powdered clay for Alberta. Then, when weighing at a nearby Love's truckstop; the women at the fuel desk question my pronunciation of the word: "Scale." Excuse me! I am English; speaking the Queen's English. I do not have an accent! I get plenty of support from the line of drivers behind me and the one-liners fly in thick and fast. Most memorable: what's the difference between northern and southern women in the US? Northern women say, "You can." Southern women say, "Y'all can." Back to the north, around Indianapolis, onto Bloomington for the night as the wind subsides and the rain starts.
____Day 4: A big push of 1100 kilometres, Interstate 39 and then 94 from Portage. It's hunting season and the Whitetail deer have been thoroughly disturbed. There are as many victims of roadkill as there are mile-markers on the Interstates of Wisconsin. Into the Fargo Stamart for an evening meal and a wash for #31 at the Northstar.
____Day 5: A frosty night with clear skies; I get the clean truck back to the yard on dry roads and without a bug splattered bumper. Snow starts to fall as I drive home in the early afternoon; Winter has arrived on the Prairies.The temperature doesn't get above freezing, all day, and for probably not for the next six months.
____Overall Distance: 4242 km.

Posted by chris arbon at 6:10 PM No comments:

Taking The Rough With The Smooth. 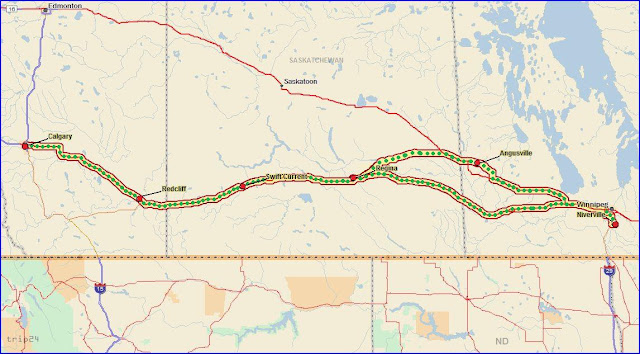 ____Day 1: A Monday, 7.00 am. departure from the yard with the hot-tub load; taking it right through to Calgary. After a busy Winnipeg Perimeter Highway, it's cruise control on the limit as far as Redcliff, Alberta. A day of watching the geese formation flying across the Prairies.
____Day 2: An early start; to make Calgary by eight and straight to the wrong address for the hot-tubs. Then from last year's Western Canada distributor to this year's warehouse; right across town. When unloaded, orders come over the phone for the re-load: drop trailer at distribution depot, take eight hour break, collect trailer, drive 500 miles to Regina, make three early morning supermarket deliveries. Canadian regulations allow a truck-driver to use his unit during his break for personal use; so I go for a meal and a shower. Four hours rest on the bunk, but no sleep. Then at 8 o'clock in the evening I leave for Regina; making the Ab/SK border at mid-night.
____Day 3: Coffee stops at Tim Horton's, Redcliff, Swift Current and Regina, keep me awake. The supermarket back-doors do their job and the trailer is empty by 8 o'clock in the morning. I go round to the Husky Truckstop; completely shattered. Twenty-seven hours without sleep; I switch off the cell-phone and draw the curtains. It's all legal on the log-book, but not the way I want to work. But it is the first shit job in the five months that I've been at Flying Eagle. Let's hope it's another five before it comes round again.
____Day 4: Late Wednesday; I headed from Regina to Angusville, Manitoba, for the next load. Loaded in the morning with flax-seed, bound for Ohio; then back to the yard. Not a good weeks work; five shifts to go to Calgary and back; normally done in three. Less than 600 kilometres a day.  A switch from day-shift to night-shift and back again; very tiring. And so much caffeine!
____Overall Distance: 2945 km.