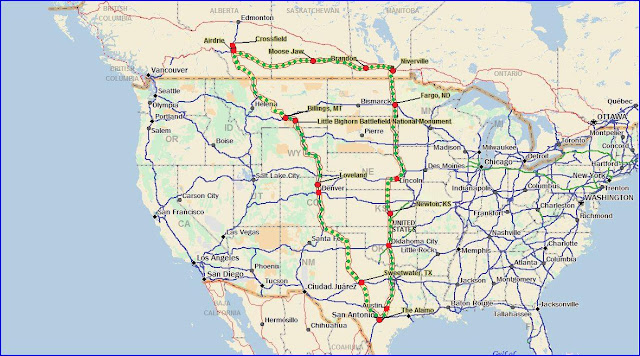 ____Last trip of Flying Eagle #31: Peat-moss down to San Antonio, Texas, with nights-out at Fargo, Newton and just south of Austin. A hot reload of salsa for the Costco RDC at Airdrie, Alberta, with overnight halts at Sweetwater, Loveland and on the doorstep at Airdrie. Then a short hop up to Crossfield for a trailer full of insulation, destined for Brandon, Manitoba. a night at Moose Jaw's Flying'J before leaving the trailer on site and bobtailing back to Niverville.
____ Overall Distance: 7430 km.
____First trip of Flying Eagle #26: After having the strenuous two-hour work-out; carrying all my stuff out of one truck and into another, I set off for Morrow in Georgia. First night at Albert Lea, second at Mount Vernon and third; parked on the unloading bay with the used truck parts. Unloaded early morning and only 140 kilometres to the reload at Heflin﻿, just across the state-line in Alabama. Back to Mount Vernon with the coils of aluminium wire before another night-out at Hasty sees me back in the yard at 2 o'clock on Saturday afternoon.
____Overall distance: 5353 km.


____The change-over: So after 25 months and 540,000 kilometres; Flying Eagle #31 and the rest of the 2011 Peterbilt 386 trucks with the DEF systems have been sent back to the dealer. Fleet numbers 28 to 32 inclusive were deemed to be too unreliable; with their endless problems concerning the new fangled emission controls. #31 never gave me any trouble; only a faulty injector ever stopped the truck from doing its work on time. But it was part of the same order as the others and all have gone. My new truck is #26, about eight months older, 40,000 more kilometres on the clock but with no requirement for the DEF injection system. Other differences: an 18 speed transmission instead of 13, 485 bhp instead of 450 and just the single bunk in the sleeper instead of #31's double. Externally identical, except for the chrome front bumper and chrome visor.
﻿
Posted by chris arbon at 1:47 PM No comments: 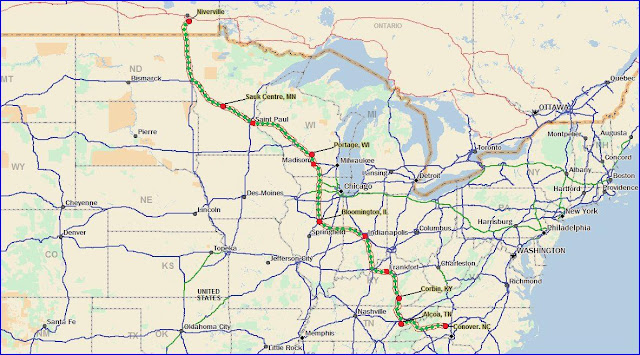 ____ A six day trip down to the company town of Alcoa in Tennessee; bales of crushed aluminium beverage cans on the way down with furniture from North Carolina as the reload. First night at Sauk Centre after a late afternoon start. Saturday night at Bloomington before parking at the factory; ready for an early Monday morning tip. Three hundred empty kilometres to Conover, all afternoon on the loading bay before getting up into Kentucky for a night at the Corbin Pilot Truckstop. Then it was two full days of driving back to the yard; just a ten hour break at the Petro, Portage.