Back to work: Flying Eagle to Eagle Pass. 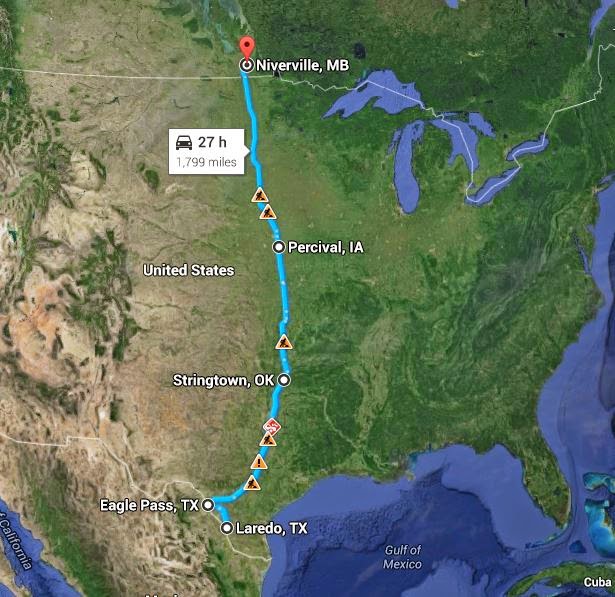 ____Day 1: Off-work with a busted shoulder for 144 days. The clocks changed and then changed back again. One way of side-stepping the Canadian winter as I pulled out of the yard with a temperature of plus 8 degrees C. The same truck as before; fleet number 26, 2011 Peterbilt 286 pulling a trailer load of quilted fabric. Destination: Eagle Pass, Texas, a job I had done before with the goods being trans-shipped for an onward journey into Mexico. Good to get back into the swing of things with something familiar and undemanding. Things go well; the border crossing, fuel at Grand Forks and then a long push down to Percival, Iowa. A late finish on a Sunday evening at the Pilot Truckstop.

____Day 2: The road to Texas is much the same but much has changed at Flying Eagle while I was away. The founder of the company sold-out to the owners of Schroeder Freight; the same week I had my accident with the trailer door. He has started a new career in selling trucks and I wish him the best of luck. I always have huge respect to guys who go out and start trucking companies. Long hours, massive work-load and often very little reward as they create jobs and put money in the pay-packets that puts food on the tables of the families of numerous truck-drivers. But some things are still the same; shit still happens. On a lonely stretch of Oklahoma highway; a steel spring breaks and the air-lines to the trailer axles fall from their flexible suspended position under the trailer. Rubbing on the ground soon allows the air to show through. The first I know about it is when the brakes come on; by then it is too late and I'm on the hard-shoulder with problems. An improvised repair gets me mobile and into the truckstop at Stringtown. The casing from a ball-point pen, wrapped with electrical tape and held in place with a pair of mole-grips and a g-clamp is not a pretty sight but does form an air-tight seal.

____Day 3: A proper job with a couple of Jubilee clips; done in the early morning light and I'm on my way into Texas for the first time in nearly a year. When the Flying Eagle trucks were pulling for Payne Transportation; the work was mainly to Florida and the South-east US but when Schroeder took over, the link-up with Payne was ended. Eagle Pass is an old pre-Payne job. Austin, Texas, is its usual slow-moving self; made worse by the annual South-by South-West Music Festival. It is getting dark when I arrive at Eagle Pass which now has a Pilot Truckstop all of it's own.

____Day 4: There is plenty of time to relax and get the cab straight as I wait until 2 o'clock in the afternoon before the trailer is empty. An E-mail arrives to tell of a reload at Laredo, two hours away across country and down-stream on the Rio Grande. E-mails on the I-Phone is another new development; company cell-phones for drivers. At last a north American trucking company has seen the advantages to be had by giving phones to their drivers. What took them so long. Across the part of Texas that was the location for the Oscar winning film: No Country for Old Men. But it is a changing landscape, as oil and gas exploration is going ahead; full steam. Heavy oil-patch truck traffic which means filthy-dirty roads made muddy by low-cloud mist and drizzle.

____Day 5: Laredo is the same edgy, heaving mass of trucks; all with their own priorities. Get in, get your load off or on, get out. I am getting a load of Mexican-made light-fittings from a trans-shipping warehouse on Export Drive. Loaded and away by noon. Customs papers sent to the office by Scan Genius; a useful little app on the I-Phone. Then it is back through a heaving Austin, a trouble-free early evening crossing of Dallas and back up to the Conoco at Stringtown.

____Day 6: Oolagah, Oklahoma, and a coolant hose splits. Engine cuts out to avoid over-heating and I am on the shoulder of Highway 169 in a town named after baby's first word. Two fill-ups of water and I get into a truckstop. The misbehaving pipe runs from the water-pump to the Tri-Pac. The leak is directly below the turbo, inside the chassis rail; a knuckle scrapping, wrist-burning, bastard of a place. I let it cool for an hour and a half; then get to work with repair tape, a Jubilee clip and a couple of bottles of leak-stop. Multiple stops on the way to Percival confirm that the repair is holding tight. The whole cooling system is now full of water and a little bit of anti-freeze; luckily the spring weather has an over-night temperature of plus 5.

____Day 7: Still plenty to do; but with just two breaks at Sioux Falls and Fargo, I'm back in the yard by 7 o'clock in the evening. The header tank on top of the radiator stays full and with only 18,000 pounds of cargo; the truck goes well. Much to my surprise; there is a reception committee waiting back at Niverville. Nathan is wanting the trailer for onward delivery to Calgary. Harry is ready to jump into Number 26 and head down to Ohio for a Monday morning delivery. I explain to each of them about my problems and my repairs before they set off. Harry says that Number 26 is now his truck.
"What about me?" I ask
" Oh, you're getting a brand new Volvo next week. Didn't they tell you?"

Posted by chris arbon at 4:00 PM No comments:

____Here is a selection of photographs taken from publicity material published by Marmon-Herrington during the 1930s. The company specialised in all wheel drive vehicles and made adapter kits for many other makes. 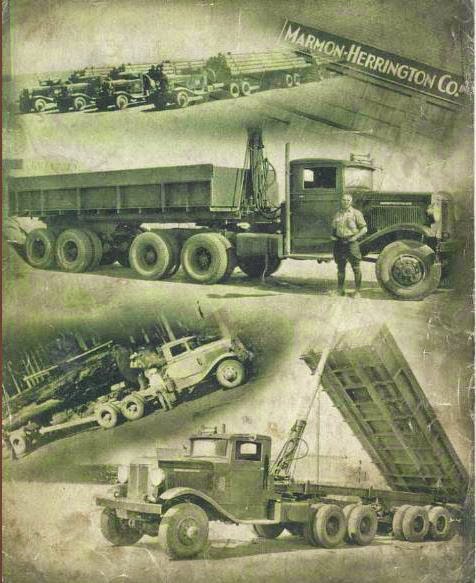 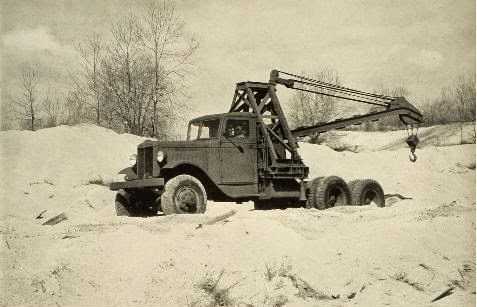 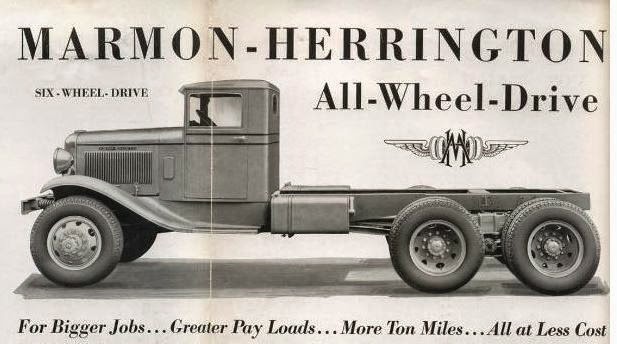 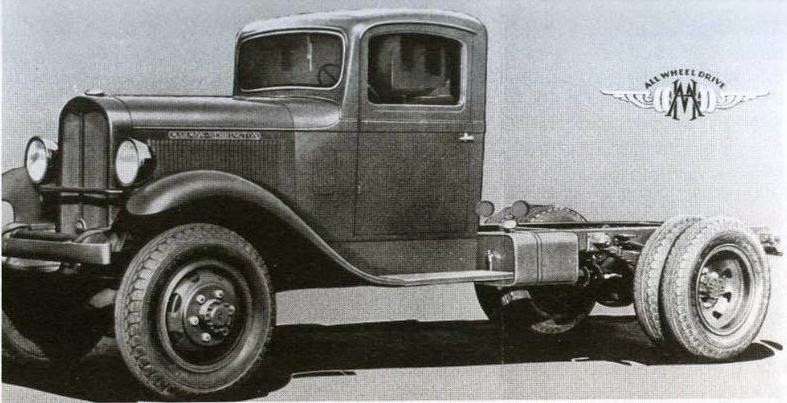 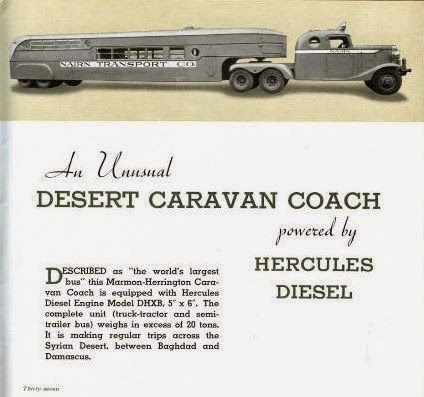 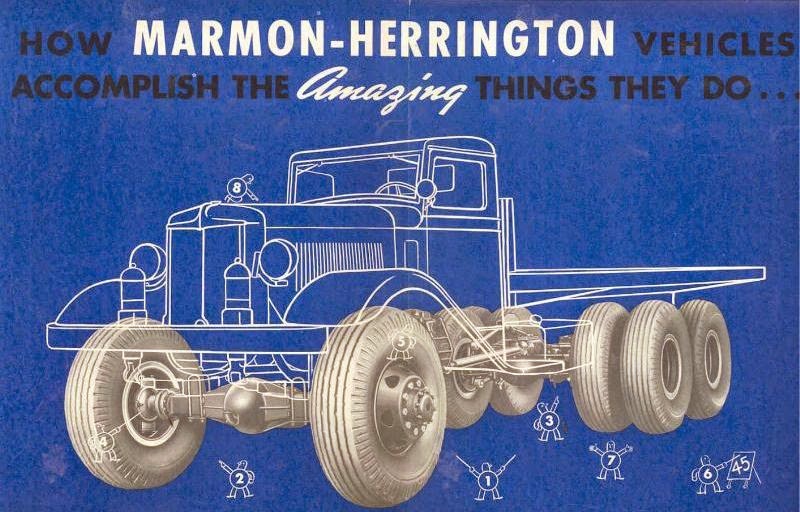 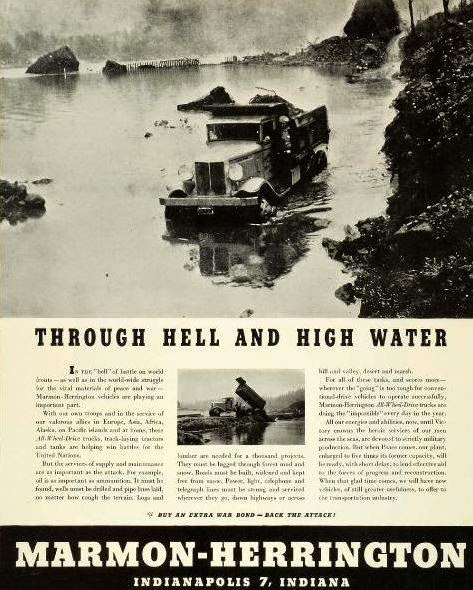 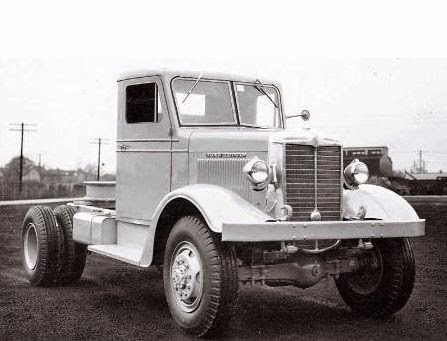 Posted by chris arbon at 2:35 PM No comments:

Before Astran: Middle-East Trucking in the 1930s.

____Here are a collection of old photographs that I found on the Internet. They are of Marmon-Herrington  and other vehicles that were part of the Nairn Brothers Transport company. Gerald and Norman Nairn started their transport business just after the end of World War One and ran an overland passenger and mail service in Iraq, Syria, Lebanon and Palestine.