Now Two Trips In One Week.

____ Day 1: I could have gone away on the Sunday but there was nothing for me. So it is a Monday midday departure with an empty trailer. A six hour drive down to Cold Spring, Minnesota, to collect a load of soft drinks. Afternoon tea at Fargo and I arrive at seven for the eight o'clock loading appointment. Loaded by nine and I decide to stay on-site over-night. I have to have a ten hour break some where on the way back and it makes no difference to my arrival time back at the yard.


____Day 2: The load is going to Calgary but my orders are to take it to Niverville. I get back at two in the afternoon. Next job; take an empty trailer to the peat-moss packing plant at Vassar, one and a half hours drive down towards the US border. The place is busy and I'm one of the last to be loaded; too late to get customs clearance for the dirt going to Germantown, near Milwaukee in Wisconsin. Any-way; someone cuts the corner exiting from the plant and nearly tips the whole lot over, saved only by the landing-leg of the trailer. Everybody has to wait until a wrecker comes to drag the trailer wheels out of the ditch. Another night on another company's property.


____Day 3: The necessary customs clearance fax arrives and I am away early. My worries about the peat-moss being too heavy are eased when I get a green light at the Minnesota DoT scale. Understandably, I am deeply upset when the Wisconsin DoT at Superior pull me into their scale house to tell me that I am 1535 lbs overweight on the drive-axles. Fortunately, the whole rig is within the 80,000 lbs legal limit. By sliding the trailer axles forward, I am able to get the drive-axles down to their limit of 34,000 lbs. Because the overweight was less than 2000 lbs and I was able to correct the problem; I escape with just a warning and no fine. Curses on all peat-moss plants with no truck weighing facilities. It turns into a longer day than expected; finishing at the Petro Truckstop at Portage.

____Day 4: The reload after the peat-moss delivery is another load of soft drinks from Cold Spring, Minnesota, again at 8 o'clock in the evening. So if I start too soon, I will be out of hours before I get loaded. It is a fourteen hour maximum day, so I reckon if I start at 7 then I can go on until 9 at night and another sleep at the pop factory. It all works out much as I had planned, out of Germantown by noon and then a non-stop thrash of 671 kilometres, with just the Minneapolis/St. Paul rush-hour to hold me up.

____Day 5: An easy day back to the yard with a load that somebody else was going to take to Richmond, near Vancouver in B.C. I did have enough time to get it there by 07.00 hours on Monday morning but the office had other plans. I think most drivers don't like it when they load trailers and the majority of the miles for that load then go to some one else; I am no different. It is early-days but it seems the new management has a new way of doing things at Flying Eagle. I know I am supposed to be on light duties until June because of my injury but the only thing that seems to be light is my pay-packet. 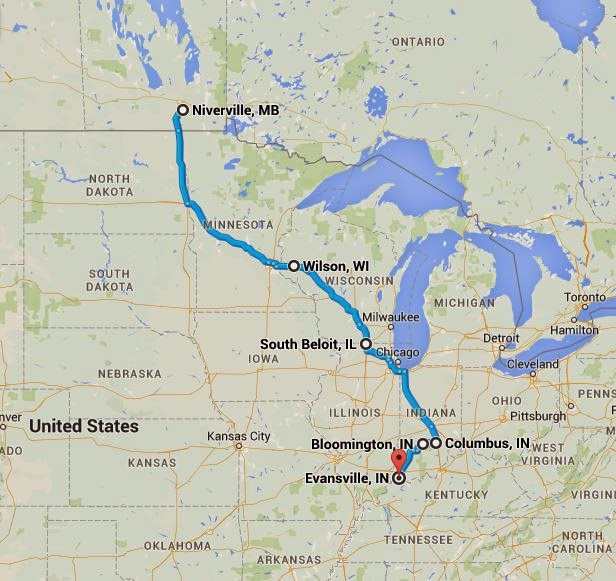 ____Waiting Days. After logging-off on March 21st; the next log sheet was started on April 13th. So what the hell was going on? The same question I was asking the office; every other day for over three weeks. No new Volvos turned up and no idea when they would. I was getting fucked about by the office. The office was getting fucked about by the Volvo dealer and the dealer was getting fucked about by the factory. The only thing that I could figure out for the delay was the colour of the trucks. White and they would have arrived on time; but the special order for dark red metallic paint caused the problem. I did think about taking my services else-where but when the office said they would pay me $100 a day for waiting; I didn't even have to throw any toys out the pram. Only! I didn't get a new Volvo; I got #26, the 2011, Peterbilt 386 to drive [again]. In the Good Old Days; getting bumped-off a new motor would have been a major issue. But with all the clean-idle DEF emissions' crap and automatic transmissions of modern trucks; an older vehicle can be a better option. Any-way; I have to drive what I'm given and #26 is not a bad motor.

____Day 1: Out the yard on a Monday morning after a swift pass with the vacuum cleaner in the cab and sleeper. Then down to the border and a place on the end of  along line of trucks heading into the States on Cargo Monday. I have a load of 6 foot-high cedar trees from a tree farm in British Columbia; so I was expecting the load examination that all living things have when they enter the US. I didn't expect that they would find a rogue beetle in the trailer. It was three hours before I  could leave. Invasive Species is a hot-topic at borders now. My beetle was photographed and the image e-mailed to an insect expert in Seattle  for identification. Luckily, the beetle already had some relatives in Indiana and wasn't considered a threat to the ecology. Strong side-winds accompanied me for the rest of the day as I tried to make up for lost time but only reached Wilson just before mid-night.

____Day 2: A thousand kilometres to the first drop of three and all goes well until South Beloit, Illinois. After fuel and a shower, I come out to find I have a flat tyre. Why don't I ever see these things when I arrive at a truckstop? The nice lady behind the counter of the Flying'J gives me directions to Jack's Tires, five miles across town. I bobtail there and back inside an hour; but the tyre is un-repairable and I have to buy a part-used replacement. Then it's another late finish as I park outside my first customer at Columbus, Indiana.

____Day 3: Menards are a big chain of hardware, building product and gardening superstores. All three of my drops are for Menards in Indiana; Columbus, Bloomington and Evansville. I am empty by midday and would normally have gone in one of the stores for a wander-round; great tool section. But after coughing-up $250 for the tyre, cash is short and the re-load is four hours away on the south-side of Nashville. The Lewisburg factory loads trailers 24/7 and operates a system where the driver drops his trailer and a factory shunter takes it away to be loaded. It is a two hour wait but I have enough time to get back north of Nashville and a night at the Oak Grove Pilot.

____Day 4: A thunderstorm wakes me up at dawn; rain, heavy enough, to postpone a parking-lot dash for coffee. But in one way the rain through-out the day is a blessing. My used re-cap drive tyre is a barely-legal tread-depth mis-match and had been running very hot; the cooling wet roads will stop a blow-out, I hope. A big day is needed if I am to get home Friday night. Black River Falls arrives just as 11 hours ticks round on the driving-hours clock.

____Day 5: Only 20,000 lbs in the trailer, which is just as well because there are head-winds all the way home. I meet Mr. Ramsden and his brand-new Volvo in Grand Forks. The latest Brit to pull the trigger on a new truck and start life as an owner/operator. He is swearing about the head-winds ruining his fuel consumption figures; pulling an 11 foot 9 inch oversize load is not helping either. Funny how he never used to mention this sort of thing when he was a company driver. 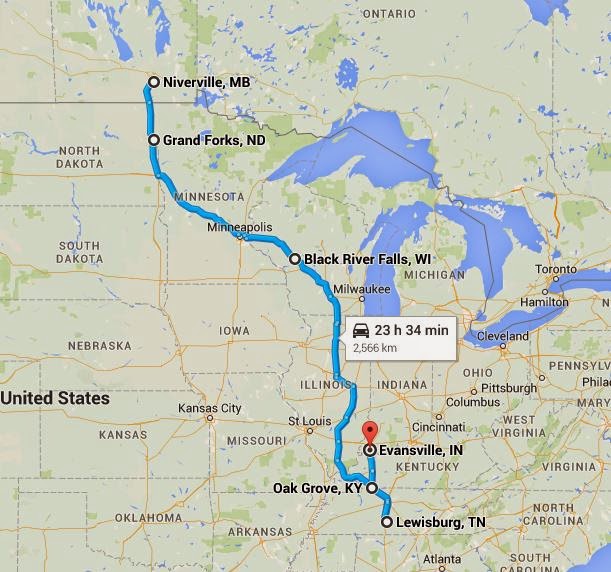 Posted by chris arbon at 7:57 PM No comments: