The Caldwells in the USA. 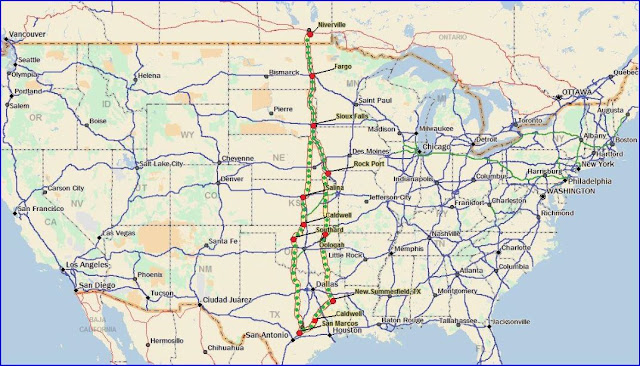 _____There are five Caldwells in the USA and this latest trip took me through two of them. Caldwell, Texas, and Caldwell, Kansas. Just plain Caldwell, not Caldwell City, not Caldwell-on-Sea, not even Caldwell-by-the-Buffet. It was peat-moss to New Summerfield and then across to San Marcos via the first of the Caldwells. Second pick-up was from Southard, Oklahoma. I came across Caldwell number two on the way up to Salina. A six day trip of 5285 kilometres with the five nights-out at Rock Port, New Summerfield, Waco, Salina and Fargo.

Posted by chris arbon at 9:35 PM No comments:

Can't park, wont park, leaves it at the pump,
Just passed the test, doesn't want a bump,
Parked in line at an easy pull-thru,
Shady little spot with canopy too.

Can't park, wont park, leaves it at the pump,
Typical tactic for that big lump,
Walking from the parking lot is just too hard,
For four-forty pounds of  human lard.

Can't park, wont park, leaves it at the pump,
Filled both tanks for a mighty sum,
Presumes he's paid rent for an hour,
Gonna take his time, gonna take a shower.

Can't park, wont park, leaves it at the pump,
Urgent number two, has gotta take a dump,
But doesn't come back when he's been,
Sits there reading Challenge magazine.

Can't park, wont park, leaves it at the pump,
It aint just tires that are gonna get a thump,
Do unto others and avoid a death threat,
Try a bit of fuel isle ettiquette. 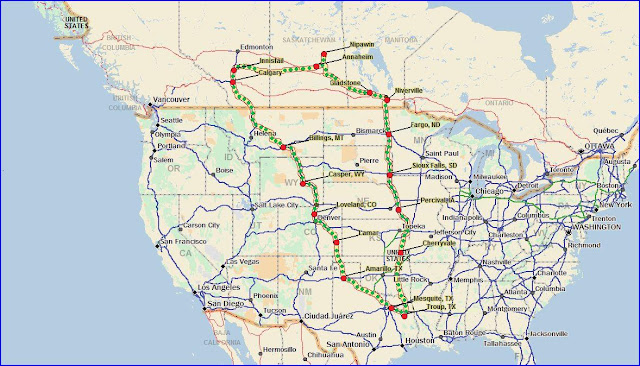 ____Day 1: South of the border on a Tuesday afternoon and all is well until South Dakota. Then blowing snow compacted into a thin white sheet of glass; three hours of tricky slick conditions made dangerous by car drivers constantly changing lanes. A fast travelling truck in the outside lane does not mean it has a better road surface that is there for the taking. But a phone call with Matt Newcombe, who is two hours ahead on Interstate 29, tells me of bare and dry roads south of Sioux Falls; so I push on into the darkness and a night at Percival, Iowa.


____Day 2: Bobby Troup wrote the lyrics for the song, "I get my kicks on Route 66," in 1946. But as far as I know, has no connection with the town of Troup in Texas; which is once again the destination of my peat-moss load. Now out of the wintry weather; its an easier day as I make it right through to the unloading dock at the plant nursery.


____Day 3: After unloading the dirt; its off to Mesquite, an eastern suburb of Dallas, named after the Texas Ironwood tree. A common flavour of bar-b-qued food produced by smoking wood-chips. A 3pm loading appointment leaves me with a rush-hour crossing of the Dallas-Fort Worth area leading to the four-lane US Highway 287; north-east to Amarillo.


____Day 4: Cloudless skies as more 287 takes me to Interstate 70 and Denver. Here over-head matrix signs warn of an incoming Winter storm; but Friday's driving hours only take me as far as Johnson's Corner, near Loveland.
____Day 5: A good breakfast sets me up for the journey north into teeth of the storm. Wet snow until the Wyoming border at Cheyenne; then, as the ground rises, the temperature falls. White-out blizzard conditions slowing progress as the windshield wipers battle to clear the icy screen. When the driver's side wiper blade becomes un-hooked, it puts me in a dangerous situation. I have to stop, but in the conditions; my tyre tracks will lead any following vehicle into the back of my snow-covered trailer. I rush to clean the snow from the trailer lights; throw open the hood; climb up to re-attach the wiper blade and clear the ice. Down the hood and get going as quickly as possible. Amazingly: nothing passes whilst I am on the shoulder. By Casper, at mile-marker 185, the snow has stopped; all is bare and dry through to Billings and an evening meal with old friend, John Cooper, who has experienced a similar day.


____Day 6: Mr. Cooper is en route from Iowa to Alberta and we run together until the TIR man, with experience of Russia, North Africa and the Middle-East, has a trailer tyre blow-out at the border. His fifth blow-out in as many months; maybe he should become TIRE man. I don't like leaving a fellow Brit in a foreign country when he has a problem; but the tyre -fitter is only an hour away at Lethbridge and John's delivery is half-an-hour further on at Claresholm. I push on to Calgary.
____Day 7: Adhesive delivered just half a mile from the Flying'J; then up to Innisfail for fibre-glass insulation going to Anaheim. Sadly not the Disneyland Anaheim in California but the double"N" version in north-east Saskatchewan. The roads are fine in Alberta but as soon as I cross into Saskatchewan; its back to the compacted blowing snow and the thin white sheet of glass. Every vehicle in the ditch slows the long line of traffic by 10mph until we all crawl into Saskatoon late in the evening.


____Day 8: The bales of insulation get pushed out onto a snow covered builders yard. They weren't heavy but did give good traction to the drive tyres. Conditions haven't improved and now the empty rig difficult to control as I head even further north for a reload of alfalfa seeds. The load from Nipawin gives me more confidence in the trucks handling but the afternoon sunshine starts a thaw, which covers the ice with a film of water. Tricky becomes super-tricky becomes run-along-the-shoulder-and-find-grip-there.
____Day 9: The March sunshine maybe warmer but the nights still drop to below minus 20. The truck runs all-night at Gladstone before I meet up with Mr. Cooper again at the Headingley Flying'J for breakfast. Then its into Winnipeg to deliver the seeds before going back to the yard at noon.
____Overall Distance: 7505 km.
Posted by chris arbon at 10:23 PM 1 comment: 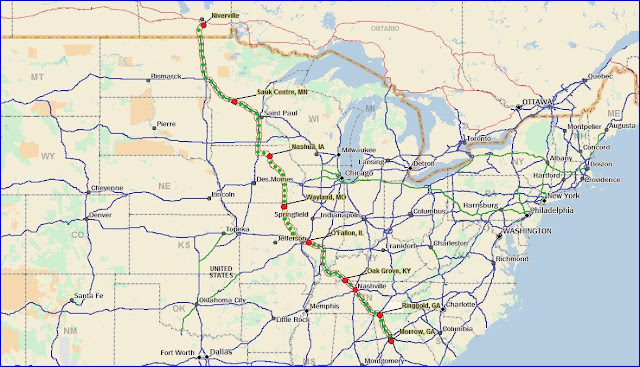 ____ The regular run down to Georgia has come round again to break the cycle of endless Texas trips. Three days down, nights at Nashua and Oak Grove before sticking it on the bay ready for a Friday morning unloading at Morrow. A reload out of Ringgold and onto O'Fallon for the night. Saturday night-out at Sauk Centre; back in the yard by early afternoon on the sixth day. Nice, unremarkable trip with much warmer weather and only 30,000 lbs each way.
____ Overall Distance: 5197 km.

Posted by chris arbon at 6:26 PM No comments: