Haz-Chem On The Mackinac Bridge.

____ This trip started with a pre-loaded trailer out of the Steinbach yard; but only after I had spent the previous day phoning the office every hour to see if there was any work. They like the drivers to phone them regularly through-out the day in case some work comes up. But for a driver, it is a whole wasted day as they never know if they are going to be leaving in next couple of hours. You cant start doing something if you don't know if you will have time to finish it.

____ Away early and down through the border at Roseau, heading for a night-out at Mauston, Wisconsin. Second night at Upper Sandusky, fifty kilometres from the delivery at Shelby, Ohio. A switch for an empty trailer at a distribution centre before heading north into Michigan for a load of hazardous chemicals from a factory near the town of Midland. Back to Steinbach with a designated route across the Upper Peninsula and crossing of the Mackinac Bridge,

____ The suspension bridge crosses where the water of Lake Michigan flows into Lake Huron and has restrictions for trucks carrying hazardous loads. You must phone for an escort vehicle to come and accompany the truck whilst on the bridge; a bit like the Dartford tunnel under the River Thames in England. The is no charge for the bridge authority pick-up truck to follow you over; but there is a $25 toll for five-axle trucks. After the crossing, I was just about out of time for the 14 hour day so stopped the night at a truckstop in St. Ignace. Black Perch and chips for a Friday night supper was different.

____ The last leg of the trip cut out the crossing of a busy Chicago and it was US Highway 2 across to the Interstate 29 and a border crossing, back into Canada, at Emerson. En route, a night at Bemidji, Minnesota, where a Menards Superstore had been built behind the truckstop since my last visit. Menards' sores have everything for builders and home improvement with a huge hardware and tool section. So that was Saturday night's entertainment taken care of. Back home by noon on Sunday, Monday off and as I am writing this, it looks like today is going to be another day of phoning the office every hour.
Posted by chris arbon at 8:58 AM No comments:

____ This trip started and finished in falling snow; as Winter and my cough hang on into Springtime. But I did get into warmer weather and the first bugs on the bumper as I went down to London, Kentucky, with a load of paper bags. The reload was at Troy, Ohio, again. Just a quick blast, north-bound on Interstate 75 for a trailer switch, late on a Friday afternoon. It was loaded with ten drops in Canada; finishing at Fort St. John in Alberta. A good mileage trip but I only get to take it to Steinbach; disappointing.

____ Something a bit different; two loads out of Canada in one week. But both are to Wisconsin, which seems to be my number one destination since I joined Penners. The first is an empty trailer that needs loading on a farm near Elm Creek in Manitoba. Destination La Crosse; along with several others from the fleet. This makes reloads thin on the ground and after a lengthy wait; the office orders an empty run of over 6000 kilometres. North to the border at International Falls, Minnesota, then to Dryden, along Highway 502, for a trailer switch and a load for the USA. Something to the Southern States would have been nice but it is only to Park Falls. Back to Wisconsin, to deliver and then to switch trailers at Arcadia; before dropping the trailer in Winnipeg and bobtailing home. 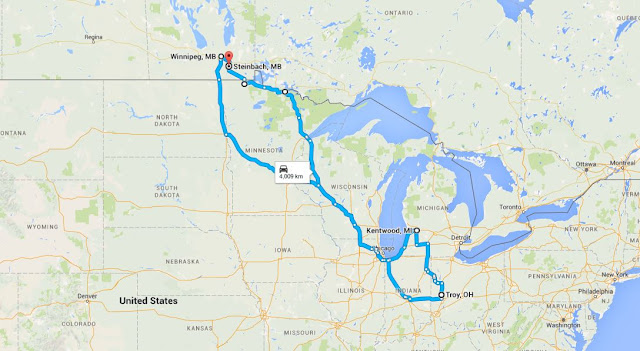 ____ Not much fun, out on the roads with a cough that threatens to turn into Pneumonia. Just drinking lots of fluids and trying to sleep sitting upright. Trying to stop the build-up of phlegm in my lungs. I could have phoned in sick but didn't fancy a week at home where the cough might get the upper hand. So I went to work and fought it. A five day trip with a load to Kentwood, Michigan; a mile from the last trip's delivery point. A four hour dead-head down to Troy, Ohio, for a trailer switch; then back to the Winnipeg terminal. Miserable weather all the way, sleet, snow and rain. I was miserable too.
Posted by chris arbon at 10:31 AM No comments: