Battling Through The 'Flu.

____ Not much of a blog write-up for this trip and no pictures. The 'flu hit me on the second morning and I am still suffering the effects, over one week later. An aching body, head-ache, cough, loss of appetite, bouts of shivering and difficultly in sleeping. One of the worst weeks out on the road that I can remember. A load to Kentwood, Michigan, followed by a reload from Kalamazoo; an hour to the south. That one went to Cobourg, which was followed by an dead-head up to Saint-Laurent. A really heavy load back to Winnipeg rounded-out the trip. Luckily the last leg was run over the Easter Holiday weekend and all the scales were closed.
Posted by chris arbon at 6:35 PM No comments:

____ Load 1: Three drops in Missouri and each Bill of Lading is four pages long. One line for the load description and 3 and a half pages of instructions for the driver. A complete load of bollocks of out-dated information and conditions to be adhered to. If I am ever caught wearing a hair-net, or Heaven-forbid, a beard-net; you have my permission to shoot me. But first, I have two days of southbound driving in the rain. Interrupted by a Level 1 DoT examination at the Watson scale on the northern state-line of Missouri. Everything was in order except the brake-lights on the trailer, a violation that I was able to correct by switching a couple of relays in the Volvo's fuse-box. The throttle-pedal is now disabled but once the inspecting officer has given permission to leave; I can switch the relays back and continue. Clinton, the first drop, unloads me when I arrive in the evening; expecting problems. So much for the rules on the bills. On to Hazelwood before noon and down to Jackson with the last drop off before two.

____ Load 2: To Memphis, Tennessee, and a Mid-day pick-up at a logistics warehouse that has never loaded two trucks for Canada on the same day. Confusion reigns; a load of hardware for Home Depot and a load for a Home Hardware depot. I still don't know if I got the right stuff on my trailer, but as I was only taking it to Penner's Mississauga terminal, I soon gave up worrying. I was up to Monroe in Michigan when I began worrying when the customs clearance was going to come through. It didn't arrive and I muddled through by putting the load in "bond." The trailer still went to the terminal.

____ Load 3: Going back into the States, straight after bringing out a load, always causes problems with the log book hours. I have enough time to get down to Dwight, Illinois, so cannot refuse the load. An afternoon delivery gives me plenty of time; Sunday afternoon to Monday afternoon. A heavy load with the trailer legs sunk in the soft ground; a lung-bursting wrench on the handle for twenty minutes before I can hitch-up and go. Paper to a print works but six o'clock in the evening before I am empty and on to the Petro at Rochelle for the night.

____ Load 4: A warehouse in the heart of Milwaukee and five Penner trucks, all loading for Regina in Saskatchewan. Just seven hours for the Tuesday and eight for the Wednesday; nights at Wilson and Bismarck, long nights. An early start on Thursday gets me across the border and to Regina; second to load, second to unload

____ Load 5: A well trodden path, Regina to Yorkton for a trailer switch. But how I was detained for three hours is annoying. The mill wanted to load my trailer, then found glass on the floor of the trailer. It looked like ice-melting crystals to me. Eventually I get a loaded trailer to take back to Steinbach but my day is over. Sixteen hour spread-over and a spot at Yorkton's Humptys. Back to the yard on a Friday morning with snow flurries. 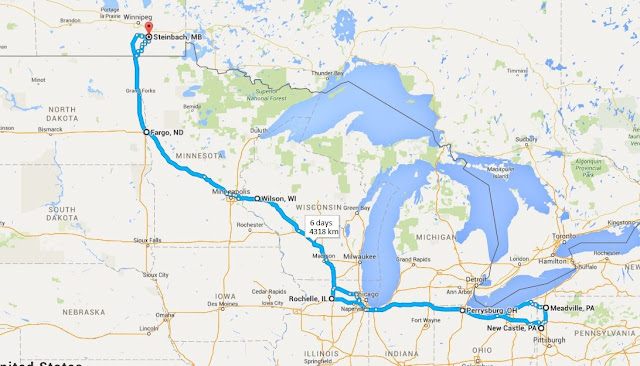 ____ Six days, three days out, three days back. Western Pennsylvania, less than an hour over the Ohio stateline. Less than an hour from delivery to reload; Meadville on Thursday afternoon, down to New Castle for 10 o'clock on Friday. Nights-out at Wilson and Perrysburg on the way down. Rochelle and Fargo on the way home. An average of only just over 700 kilometres a day; so not a big earner but one of those trips where everything went smoothly. No complaints about that.