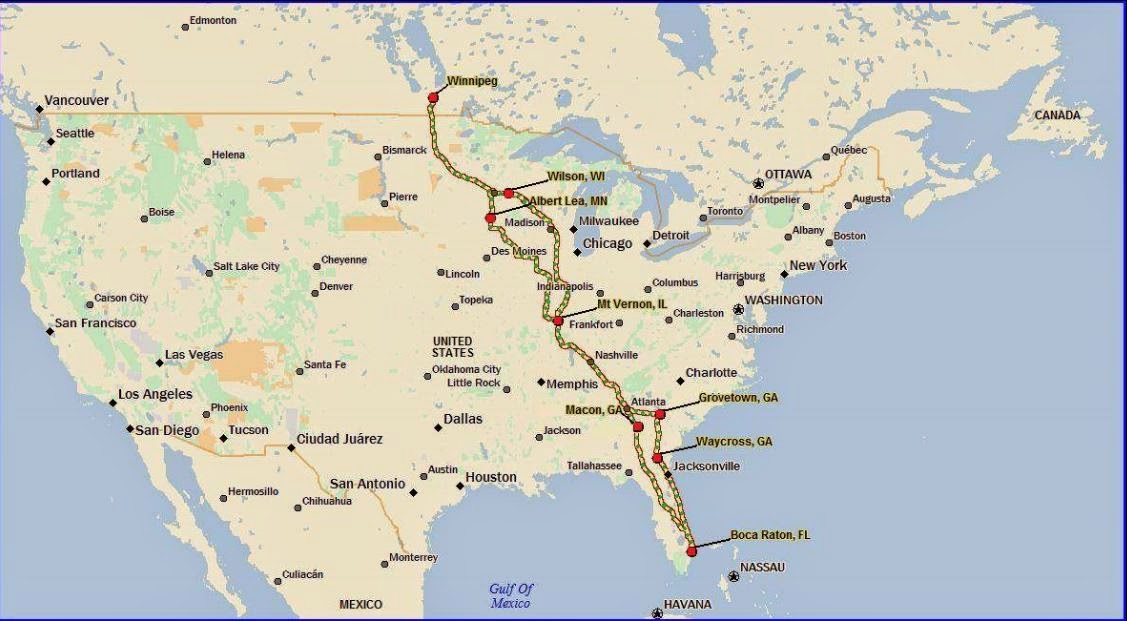 ____Day One: Good Friday and the start of a 3650 kilometre trip to Florida. Four days to do it; so plenty of time, but with such a long trip it will require careful watching of the driving hours. First stint behind the wheel takes me to Albert Lea on the southern edge of Minnesota.

____Day Two: To Mount Vernon and the first chance to use the new stuck-on-the-windscreen gadget: PrePass. A tracking device that allows the truck to by-pass scales; electronic data is fed to an overhead monitor just before the scale and a green flashing light tells me it is okay to carry on. A red light means that I have stop and weigh, as per usual.

____Day Three: Easter Sunday and the truckstops have their usual number of trucks parked for the weekend. Some companies try get drivers home for the Holidays but there are plenty who make very little effort. There are family men on the phone to wives and young kiddies, explaining how they will have the chocolate eggs and bunnies again when they get home. But there plenty who don't make those calls. Drivers with marriages on the rocks and children off the rails. To them, Easter alone in the truck is a welcome release to the pressures they would endure at home. A million and one things to do around the house; then the inevitable rows about the job, money and the kids. The sleeper attached to the truck is their man-cave until despatch comes up with the next assignment. For these drivers, weekends in truckstops are a way of life. They earn nothing, they spend nothing, they do nothing and they say nothing. Time is spent lounging in the sleeper, snacking on supplies bought at Wal-mart and peeing in a bottle. A trip to the truckstop for a shower is their only outing, even then they avoid eye-contact. These are not the heroes who keep the supermarket shelves full; not heroes battling adverse weather on dangerous roads; these are the huge grey area of drivers, all but invisible. Down to Macon, Georgia, a quiet Rest Area and warm night.

____Day Four: Georgia into Florida and soon onto Florida's Turnpike; the toll road that cuts across from Ocala south-east towards Miami. The PrePass on the screen also doubles as an EasyPass, automatic toll paying device. West Palm Beach for night.

____Day Five: Unloading is all hand-ball so it takes awhile. Then reload instructions come; make your way to Grovetown, Georgia. A fuel stop at Saint Augustine before  making my way to Waycross with just a few minutes to spare on a fourteen hour day.

____Day Six: Still three hours to Grovetown but at least this lets me avoid the early morning loading rush. Loaded in less than an hour, only 18,000lbs, so its an easy run back around Atlanta, over Monteagle and onto Murfreesboro in Tennessee.

____Day Seven: Now the driving hours in the logbook are mounting-up. Eight and three-quarters hours per day is the magic number where a driver can drive everyday and not break the rules. I'm not far off that figure, so a short day up to Mount Vernon will then give me enough to get home on days eight and nine. A rainy night in Illinois.

____Day Eight and Day Nine: Payne have a slightly different procedure when it comes to customs clearance. They use TransFlo, a system that scans and e-mails paperwork at truckstops. This is a great advance on faxing and has got my instant approval. The load clears customs on Friday and I'm back in Canada early on Saturday afternoon. Back to the yard; two drops in Winnipeg on Monday morning.

Nervous as a Kitten. 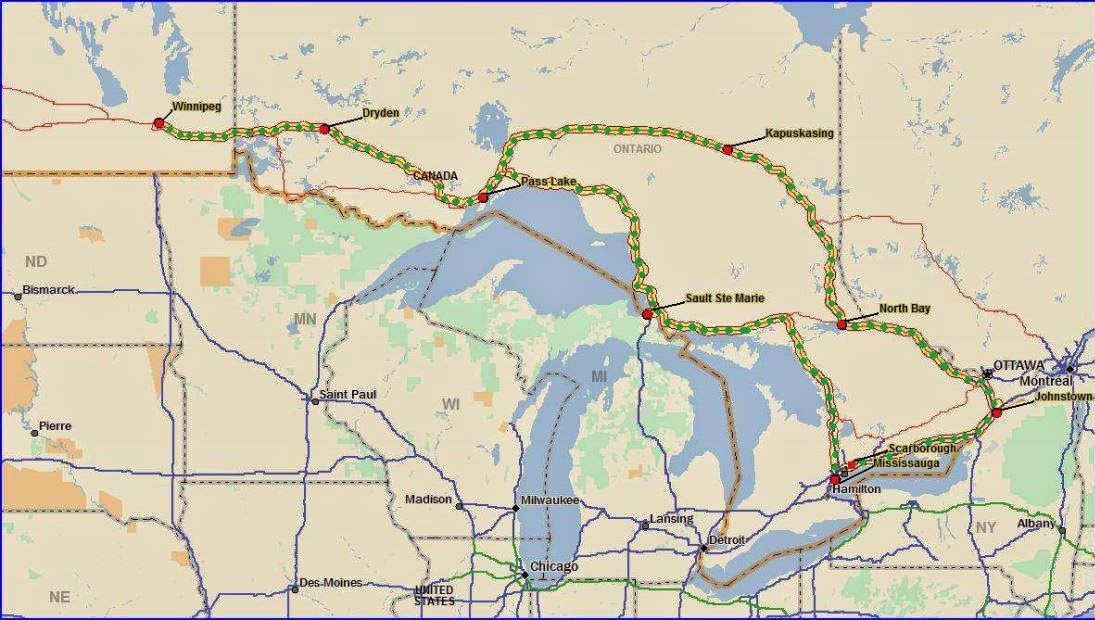 ____Day One: First load is to the Greater Toronto Area with two deliveries of furniture; just over 2000 kilometres. A two day drive under normal circumstances; but as this is all new, I give myself the comfort of an extra day and leave on Friday afternoon for the arrival on Monday. Picking up the trailer on the outskirts of Winnipeg; I  drive to Dryden for the night.

____Day Two: The bitter Winter of 2014 has frozen the Great Lakes to a record 80% of their area. As I drive Highway 17 to Sault Ste. Marie; Lake Superior is still ice-covered as far as the eye can see and this is in the middle of April. When will the water be warm enough for swimming is anybody's guess. Saturday night at the Husky Truckstop in the Soo.

____Day Three: The four days of orientation had one big omission: tuition on the operation of the Qualcomm satellite communicator. It's three years since I last used one and  advances in technology have left me behind. So I phone a friend; Mr. Ramsden, who gives me the heads-up on the latest touch screen messaging system. Only problem, the short cable on this thing is like a coiled spring and at every opportunity the electronic box flies out of my hand and onto the floor. A rainy day, driving down to the Husky at Mississauga; not 10 kilometres from the first drop.

____Day Four: Up early, too early, not wanting to mess-up the eight o'clock delivery appointment. Sitting in the truckstop, watching the stationary rush-hour traffic on the nearby Highway 401. Nervous that I wont do 10 kays in an hour, nervous that I will deliver the wrong stuff to the wrong place, nervous because I've had so much dis-orientating instruction; my self-confidence is shot to pieces. But by 12 noon, I have an empty trailer and instructions to re-load at Johnstown.

____Day Five: A few evening snow flurries on my way to North Bay warned me that the run across Highway 11 would not be easy. Sure enough, six inches of the white stuff fell as I pushed on to Kapuskasing and fuel. After that it was bare and dry roads; all the way to Pass Lake and the newest addition to the Flying 'J chain of truckstops.

____Day Six: An eight-hour overnight break gives me the chance to deliver this load on the Wednesday afternoon. An inter-depot move of cable for one of Payne Transportation's sister companies; Tenold. A cold start at Minus 15 C and the truck is still encrusted with the ice-spray from the day before. I hope it will fall off as the temperature rises; what I don't envisage is part of the front left fender falling off. Burdened by a heavy ice coating, it breaks off with a clatter and slides across the road. Luckily I see it in the mirror and go back to pick it up. With the load delivered, the empty trailer returned; I bobtail back to the yard at Niverville for repairs.

The Eagle Has Landed.

____ All change: the endless loads of peat-moss to Texas have finished and the distinctive logo of Flying Eagle no longer adorns the door of the Peterbilt 386. Only in North America can a truck change its licence plate, fleet number and name on the door yet still belong to the same owner and be driven by the same driver. Flying Eagle #26 is now Payne Transportation #557. In fact the whole Flying Eagle fleet will soon have "Payne" on the door.

____ The primary reason for this is "Workload." The owner of Flying Eagle puts in so many hours  running the fleet and he has realised it is never going to get any easier. Putting the trucks on with Payne will at least save him all the trouble of finding work, dealing with Customs, buying fuel and chasing after unpaid bills. Also we will be pulling Payne trailers. The trucks will still be maintained in the Flying Eagle workshops and the drivers pay cheques will still come from the Flying Eagle office.

____ Payne is part of the Mullen Group; an Alberta based Public company that includes other Canadian trucking outfits such as Tenold and Kleysen. The buying power of this large group will also help Flying Eagle; with cheaper fuel and tyres. Most of the Payne fleet are owner operators; either pulling flatdecks or vans. I'll be pulling vans. But first "Orientation."

____ Four days in a classroom with three different teachers/instructors and I came out wondering if I ever knew how to do the job in the first place. Payne want it done their way which is fair enough as the pay the bills. But if I learned anything new; I've forgotten it already. Day one: hours of service. Day two: customs procedures. Day three: hazardous goods. Day four: the "Smith System" and four stints of driving around Winnipeg. Oh, and a free lunch everyday.

____ The Smith System was something new; an advanced driving course designed to increase awareness and concentration in busy traffic. Look well ahead, watch out for other vehicles and don't tailgate. All good advice and I couldn't fault it. I just wish all North American drivers took the Smith System course after they got their licence.

____ So it's going to be something different; a chance to blog some different loads to a more varied selection of destinations. Watch this space!