The Prairies at a muddy time of the year. 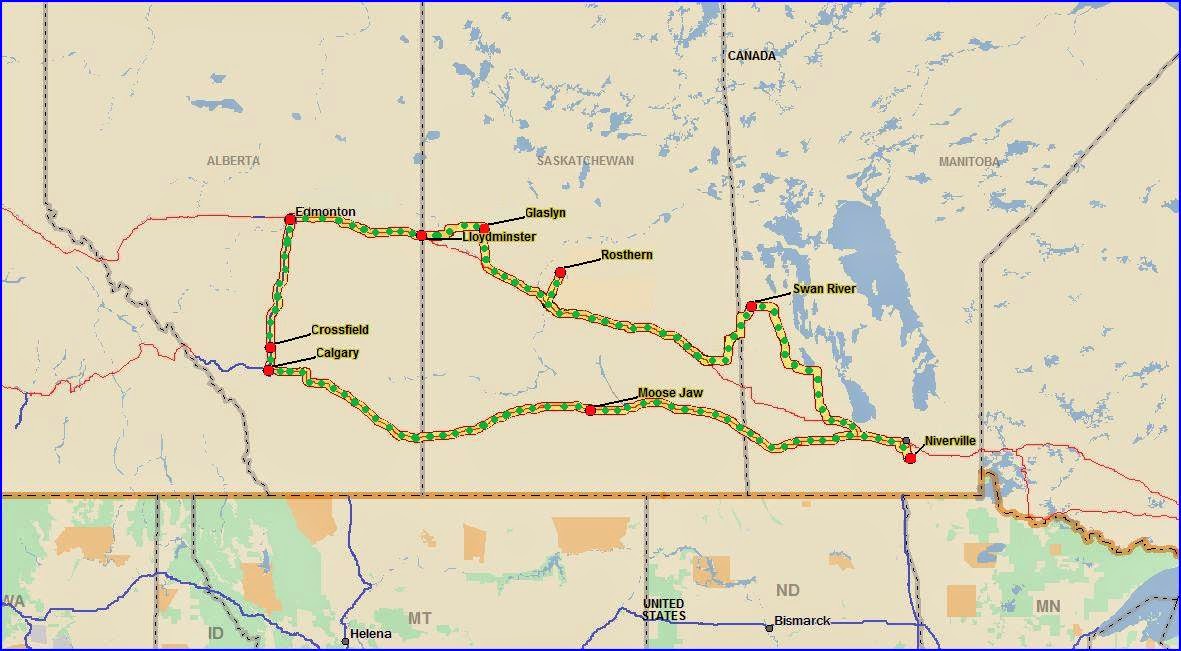 ____Calgary is never just One-Day-Way from the yard; mid-day start on a Sunday puts me in the Moose Jaw 'J before sunset. Into the West, into the wind, into the Sun. The next day, the other half; 'J to 'J.
____Tuesday and the mattress factory gets their Virginian fabric. Then to Crossfield; to sink in a soft spot; Alberta thaws to the sound of cursing. Rescued by Bobcat; pushing with the bucket jammed in the jaws of my towing eyes. Insulation for Saskatchewan building sites; to Lloyd to end the day.
____Mud at Glaslyn, mud at Rosthern then the empty trailer to Swan River in exchange for a pre-loaded wood-chip consignment. Back to base: 3614 km.
Posted by chris arbon at 12:13 PM No comments:

Poem from a Long-Distance Runner.

I’ve considered every single word you’ve said,
And not just because you’re very good in bed.
But you’re banging your head against a big brick wall,
If you think I’ll ever take that job on short-haul.
It’s something that I find hard to justify,
But saying I hated long-haul would be a lie.
You were happy enough when this affair began,
So why can’t you still take me as I am?
My mood and attitude would not be right,
If you forced me to come home every night.
Your friends may say you’ve found yourself a keeper,
But I still look forward to nights alone in the sleeper.

There’s no-one else, no-where, no way,
And there’s nothing else that I can really say,
I’ve no idea where it all went wrong.
No future and I’m going, going, gone.
Posted by chris arbon at 5:42 PM No comments: 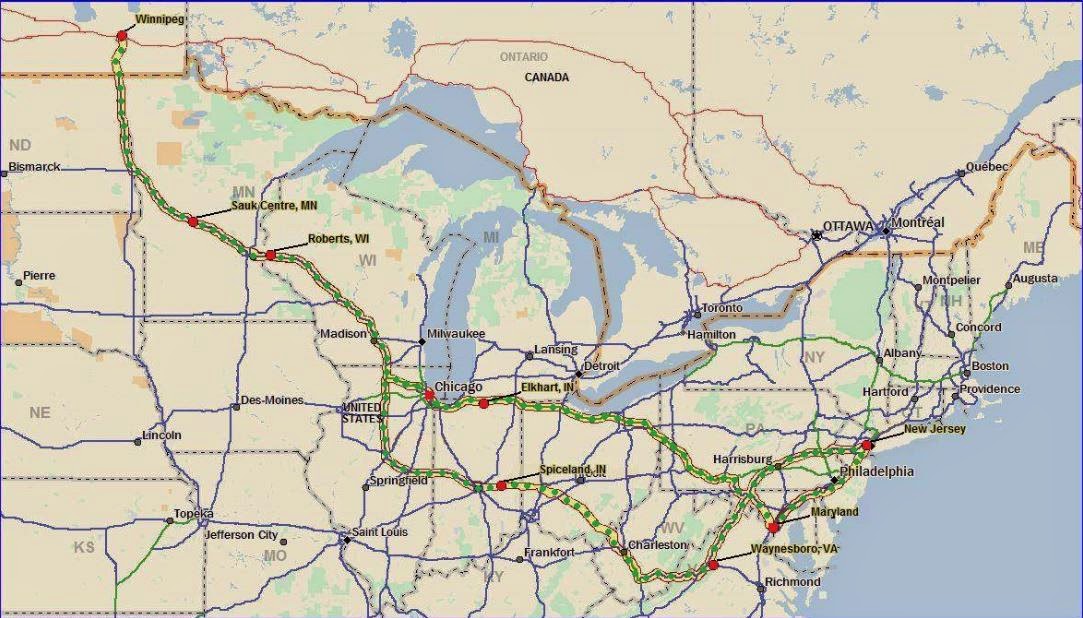 ____Day One: The trailer is loaded late on Friday afternoon and by the time I am through the border it's looking like a Mid-night finish. Sauk Centre it is, just before the witching hour; I hate running the logbook onto a new page just for a few minutes.

____Day Two: Minnesota's most Over-The-Top waitress is on duty at the Truckers Inn. I used to avoid her section and all the How are you? Awesome, Your welcome, No, Thank-you. But I began to feel left out; now I wallow in all the attention with knowing nods to the other customers. A ten o'clock start and  that gives me a trouble-free run at Chicago before the Elkhart Services on the Indiana Turnpike.

____Day Three: To get a flying start at the nine drops, I need to be on the doorstep of the first, Gaithersburg, Maryland, on Monday morning. I arrive just before dark at a strip mall with very limited parking. Good job the lot is deserted.

____Day Four: The Eastern Seaboard is busy, busy traffic and the space to manoeuvre a truck seems to diminish as I get closer to every delivery point. Showrooms with unloading bays at the rear; but I get four drops done before a night at Bordentown Petro, a place I hadn't visited for several years.


____Day Five: Another four drops leave just one  for the Wednesday. This area has a reputation for un-friendly people but I can't fault any body at any of my customers. They all seem relaxed and I am taking my time as I don't want to deliver the wrong stuff to the wrong place. The last drop is another strip mall, I creep round the back and get a quiet night's kip.

____Day Six: A sign on the door says the opening hours are from 10.00 am to 4.00 pm. Monday to Thursday. A bit longer Fri, Sat, Sun. Nice work if you can get it. The office hasn't found a reload yet, so I sit and wait. I get an empty trailer and a reload at the same time; a three hundred mile dead-head to Waynesboro, Virginia, doesn't give me enough time to load. So, a night at Harrisonburg's Pilot.

____Day Seven: Fork-lift truck drivers live in fear of truckers driving away before  the trailer is fully loaded. They used to ask for the keys to the truck, but found that most drivers had two sets. Some asked drivers to stand in a yellow painted square on the floor near the loading door; but this violated their human rights. Most new loading bays have a system that hooks the trailer to the bay. But this old place at Waynesboro just asked the driver to un-hitch the unit and park alongside. The loader then put a lock on the red air-line just to be on the safe side. Thirty thousand ponds of fabric loaded and the Appalachian Mountains to crossed; Interstate 64 to Charleston. Then US Highway35 to Dayton. a good north-east diagonal four-lane.

____Day Eight: Out of Spiceland, bright and early, through Indianapolis before rush-hour. Enough hours to get home in two days, due to the limited mileage on the days when I was delivering. I pull into Roberts, just east of Minneapolis, at four o'clock. I rest-up to miss the evening rush, fall asleep and wake at half past 11.

____Day Nine: I don't always start work at three in the morning; but when I do, I make sure I'm going to finish up at home. Back in the yard at 10.30; which let the fitters service the truck; ready for the onward trip to Calgary.

Posted by chris arbon at 8:02 PM No comments: 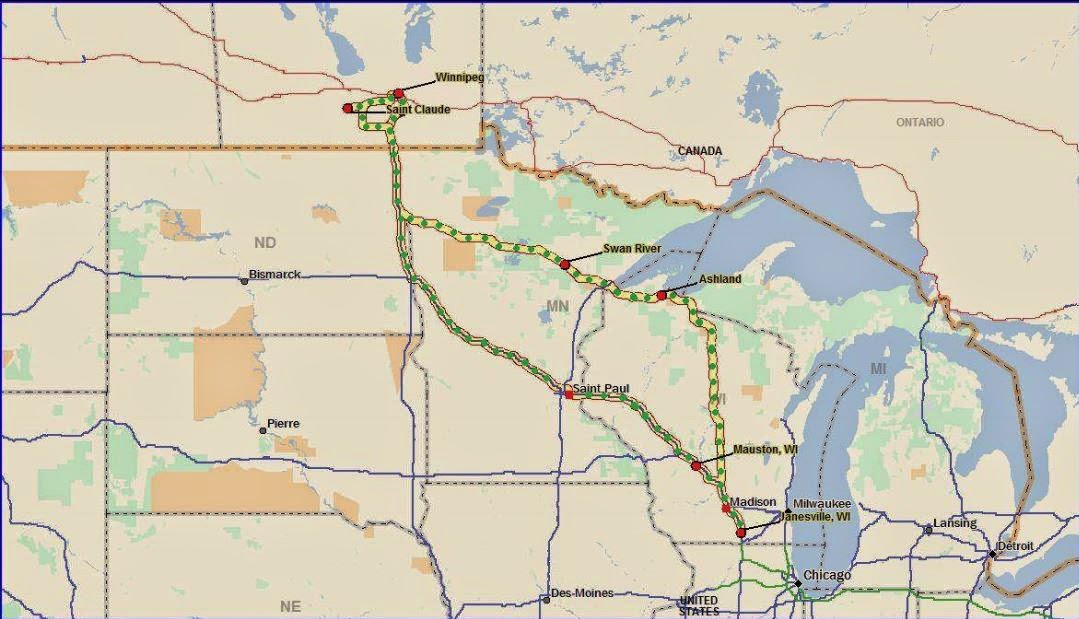 ____ Day One: The shortest trip for a long time. Monday morning saw me finishing off the previous trip with two drops in Winnipeg; then it was a short run out to St. Claude where I loaded the same trailer with seeds. I had a leisurely lunch at the Outpost Restaurant in Winkler while I waited for customs clearance and the go-ahead to cross the border. Then onto the truckstop at Swan River for the night.

____Day Two: A muddy yard at the seed warehouse in Ashland, where it starts to snow. It snows half way down to Janesville, 536 kilometres away to the south. I'm expecting to find a loaded trailer at one of Payne's regular customers; but the company has decided that it needs more empty trailers at the distribution centre. My orders are to leave the empty and bobtail back to Canada. Thank goodness the roads are now bare and dry; bobtailing on hard-packed snow is no fun at all.

____Day Three: Over a thousand kays back to the yard; with a half-hour break at the Northstar Truck Wash in Fargo. Of course, sod's law, it starts raining at Grand Forks. Back to the muddy yard and hopefully a few more miles next trip.

Posted by chris arbon at 9:21 AM No comments: