____ Huntsville, in Texas, is the peat-moss destination as I leave on a Friday with the hope of just doing a quick up-and-down trip that well get me back in time to do some leisurely Christmas shopping. A leisurely start gets me down to the Coffee Cup Truckstop at Vermillion; followed by night-out number two at the Cowboy Travel Plaza. Warmer weather and one of the quietest nights at an American truckstop that I can remember. An early start gives me time to check-out the new Summit Racing superstore at Arlington, between Dallas and Fort Worth; just off Interstate 20. Some sound insulation pads for the Mack from a place that has everything for the custom-vehicle builder.

____ The Pilot Truckstop is just three miles from the peat-moss delivery; I'm back, waiting for reload instructions within an hour of leaving for the drop. Schulenburg is the word I am waiting for. Two hours across country, a heavy load of guar gum for Calgary and a Friday 09.00 delivery appointment. After the last trip to Calgary had me returning to Steinbach before going West; this is not what I was expecting, although it is typical inconsistency from the office. Out comes the road atlas and Wichita Falls looks like the best I can do after I'm loaded.

____ Weather reports show I'm headed into snow-storms, they are coming South to meet me. Crack-on driver and get as much done before the inevitable head-on collision of truck and white stuff. Colorado and Wyoming, no problems; but into Montana and the Interstate 90 starts getting dusted at the Little Bighorn Battlefield. By Billings day light is fading, the snowfall is heavy and the town is grid-locked by the treacherous conditions. On the long climb out of town towards the airport, I am grateful for the heavy load and the traction that it provides. Pitch darkness and a white-out from snow thrown-up from a pair of new Peterbilts. The topped-up trucks came past one of last hills before Billings; they were one light change ahead on the crawl through Billings; now they are struggling for grip as we run the two-lane cross-country route in four inches of fresh snow. Slow going until the junction at Harlowton, where I call it a day and nose-in among the earlier arrivals while the Petes push-on, up and over to Eddie's Corner.

____ The engine idled all night at 800 rpm. Snow had stopped by dawn but it was hard-packed and icy all the way to Grand Falls and Interstate 15 to the border. Calgary had snow flurries as I arrived with plenty of time to spare. Getting north of Fort Worth on the first leg of the trip really payed dividends. Delivery done and the reload is from Edmonton on the afternoon of the last workday before Christmas. A load of paper for Mexico is quickly loaded and I have enough time to get to Saskatoon. It's going back to Steinbach but with the whole Christmas Holiday being forecast to have dangerously cold temperatures; I'm tempted to volunteer that I go direct to Laredo. Back in the yard on Saturday evening with just enough time to get to the liquor store and supermarket. This year I gave booze and scratch cards.


____ Bringing back last weeks load to Steinbach in Manitoba when it was due to go to Alberta had me worried about the office staff. Is Ruby Truck Line making so much money that they can afford to do such illogical logistics? Then, when I get told to carry on with the load after a log-hours reset; it makes no sense at all unless they run me directly from Edmonton to Texas. That didn't happen; it was a load from Acheson back to Brandon, Manitoba.

____ A late start on a Saturday afternoon gets me to the Flying'J at Balgonie and that is enough to make sure that I am in Calgary and ready for the Monday morning delivery. Sunday afternoon temperatures at the Flying'J in Calgary are at an amazing +15 C as the jet-stream defies geography and drags Atlanta, Georgia, down to zero degrees. Warm weather too, at Edmonton for the second delivery; then on to Acheson before dragging a heavy load of wood-chips across to Saskatoon for the third and last night-out of the four day run. Twenty minutes of trailer changing at Brandon interrupts the journey back to Steinbach; where normal temperatures resume.

Six Days To Laredo And Back.


____ I leave on a Saturday morning; just a short break between trips. It's December and I need to get two trips done before Christmas as it doesn't look like there will be anything happening between Christmas and the New Year. Also it's a chance to get some sun on my back in the warmer climate of Southern Texas. Another load of paper to Laredo with the same overnight stops as the last trip; Missouri Valley and Thackerville then into the TA at Laredo.

____ A warm night followed by one of those calm still mornings with a clear sky and the Sun low in the sky. Reminiscent of the Mediterranean coast of Spain during a Winter getaway from the UK where I would sit and soak up the atmosphere and do nothing all day. But not today; paper tipped and re-load instructions received before 10 o'clock. A trailer switch at Waller, 334 miles to the North-East and they need the empty trailer as soon as possible. Back up to San Antonio on Interstate 35, then Interstate 10 after a quick visit to Popeyes in the San Antonio TA.

____ Just 15 minutes to swap the trailers and check-over the new one while the guy in the gatehouse sends all the paper work to the Ruby Truck Line office and the customs broker. Drivers used to go into the gatehouse but now everything is done through a small slot in a glass window with a speaker and a microphone for communication. I hate things like that as it reminds me of visiting a prisoner in jail but when there is no messing about and things get done quickly by people who know what they are doing, then I can over-look the demeaning and distrust of their system. I have enough time to crack-on up to Hillsboro and the possibility of getting home in two shifts.

____ The road works on the Interstate 35 West at Fort Worth aren't going to finish any time soon and it seems whatever time and what ever direction, there are always some hold-ups and that's without any fender-benders which can ruin any decent traffic flow for hours. Over-night closure of the complete interstate is common, along with a multitude of random lane closures during the middle of the day. So I tried coming through at rush-hour when at least two lanes are open in each direction. Guess what? Two hours ten minutes from Hillsboro to Thackerville, which is about the same as at any other time. I celebrated with a free breakfast buffet at the Winstar Casino. [Weds and Thurs for Over 55, Players Club members.]

____ I knew I had to get to Percival in Iowa to have any chance of getting back to Steinbach in one hit. A long day into a bitterly cold wind from the North and a night under two blankets; just two days after a night on top of the quilt. Then it is all Interstate 29, north through Council Bluffs, Sioux City, Sioux Falls and Fargo. Back across the border before dark with one eye on the fuel filter gauge. But the diesel from the southern states is OK this time; warm air has come into Manitoba from some where and it is a lot warmer than when I left, six days ago. 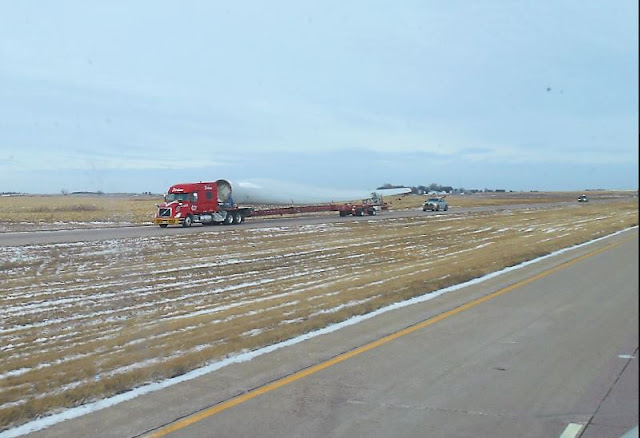 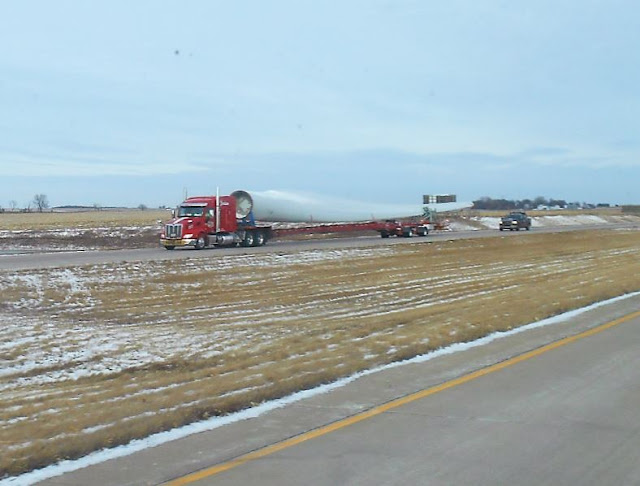