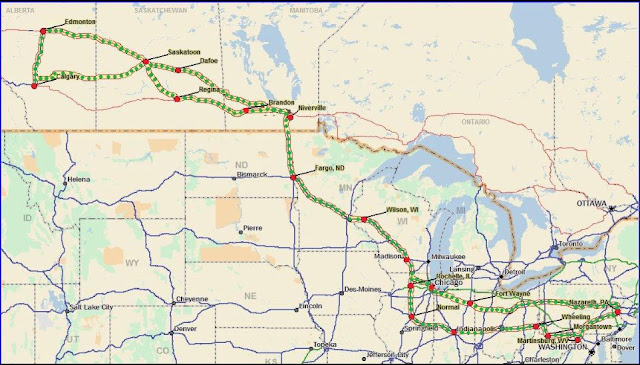 ____Day 1: The Gourmet Baker not only has icing on his cakes; he has it all over the yard as I go to deliver 20 tons of sugar on a Monday morning. Whilst being unloaded; I take the chance to clear a 40 foot stretch of concrete that will give me enough grip to launch me out of the sloping dock. Then its across town to the biscuit factory for a load of crackers; going to Pennsylvania. South to Wilson, Wisconsin for the night, away from all the snow and ice.


____Day 2: Only 13,500 lbs in the trailer; so it's good progress and good fuel consumption on the flat Interstates of Illinois and Indiana. Reaching Fort Wayne on the second leg of the 1650 mile trip.


____Day 3: Busier traffic on Interstate 80 into Pennsylvania with west-bound convoys of utility company trucks coming from the States of New York and New Jersey. Electricity repair workers from Missouri, Kansas and Nebraska returning home after helping out with the chaos that was caused by Super-Storm Sandy.


____Day 4: The Regional Distribution Centre at Nazareth is quieter that usaaul and I unload myself and am out the gate before my 08.30 booking time; that's a first. Then down into West Virginia for the reload from Martinsburg; 210 mile deadhead. If the out bound load was light; the reload of perforated plastic trays is lighter still; 8,000 lbs makes it seem like I'm pulling an empty trailer. Great weight to have when tackling the ups and downs of Interstate 68 across to Morgantown.


____Day 5: From Wheeling, on the western Ohio stateline, to Rochelle, Illinois. A three day trip down; a three day trip back is on the cards until the office asks if I can continue with the load. It's for an oil refinery in Edmonton, so good miles; plus, it's "Thanksgiving" in the States and next weeks  south-bound loads would be scarce.


____Day 6: Now I need to carefully plan my days so that I don't run out of driving hours. Ten hours a day is the limit if I want to complete the trip without a reset. Fargo for Saturday night after meeting up with Mr. Cooper at Wilson for the excellent $8.99 lunch-time buffet. The Searcy driver has his longest-ever trip; an oversize load to Florida, good miles at a good rate. But he's not happy; it's a Tuesday delivery and all he can think of is the up-coming national holiday and whether he will get reloaded before everything shuts down until the following Monday. Five November days in Florida would not worry me.


____Day 7: Back into Canada and the colder weather; through Emerson, the local border. But I don't have time to go home and push on into Saskatchewan. Dafoe for the night.


____Day 8: Seven hundred kilometres takes me to the Flying'J at Sherwood Park on the eastern outskirts of Edmonton. It takes me to 7,200 for the trip so far; a good average.


____Day 9: Entry to the oil refinery needs an orientation session at the main gate security post before  PPE [ Personal Protection Equipment] is inspected. My white hard hat is rejected; only supervisors wear white hats and I am given a red " loaner." Which is far more comfortable than my side-impact, top of the range, expensive white thing. It only takes an hour to discharge the light plastic sheets which are part of cooling towers internal structure. The reload doesn't excite me at all. Furniture groupage, two picks in Edmonton, three in Calgary before delivering the  load to Saskatoon. Edmonton and one Calgary pick-up before another Flying'J night-out.


____Night 9/10: Things go bump in the night and instinctivly I know that it is two trucks coming together. This is followed by shouting that is louder than the bang.  I get up. I am never happy when the truck is parked on the end of a line, especially at the exit of a busy truckstop and this was a close call to having severe hood damage. A rig was leaving and took a wide turn to avoid #31; so wide that a bobtail customized Peterbilt thought he would overtake on the inside. The sort of thing that happens with cars everyday but you don't expect another truck to do something as silly and in a truck-park. If the truck and trailer had kept on going it would have pulled the bobtail across into Flying Eagle #31.


____Day 10: The last of my pick-ups fills the trailer with mattresses; then it's off to Saskatoon on Highway 9 that turns into Highway 7 at Alsask, a town on the Alberta/Saskatchewan border. Where else? Snow flurries all the way that give an eerie feeling to the landscape; particually the dramatic dinosaur laden cliffs at Drumheller.


____Day 11: Five hours of sitting on an un-loading bay would normally be upsetting but as it is blizzard conditions out-side my passenger window; I don't feel in any hurry to go to Regina. One o'clock in the afternoon and the snow has stopped; or rather, moved on from Saskatoon to Regina. Probably the worst conditions I have driven in seven Canadian winters. Half an inch of frozen rain, coated by four inches of snow, greet me on the outskirts of Regina. Delivery done and a crawl to the Trans-Canada Highway before things improve on the way to Brandon.
____Day 12: The furniture store doesn't open until 10 o'clock and an hour later I'm heading home; only to pulled up by a broken break chamber. A quick fix with a clamp on an air pipe and finally home on a trip that stalled at Edmonton, Alberta. 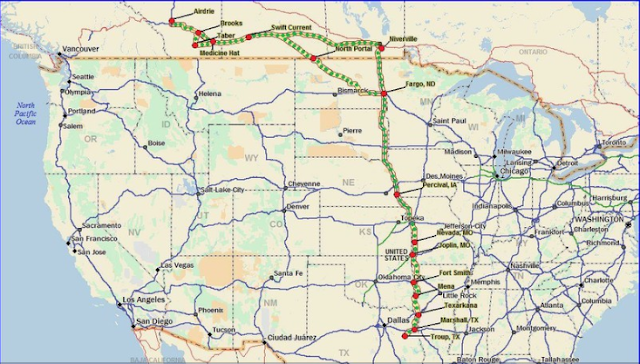 ____Day 1: Waking up to snow covered roads leads to a slow drive into work and a late start. Peat-moss to Texas, again. A late lunch with Messrs. Cooper and Ramsden at the Grand Forks' Flying'J before they split eastwards at Fargo; destined for an evening meal with Flying Eagle #32 at Hudson, Wisconsin. Whilst I push on down the Interstate 29 to Percival, Iowa.

____Day 2: Bobby Troup wrote the song,"I get my kicks on Route 66," but I don't think they named the town after him. This trip I avoid Troup by coming down Highway 71 in Arkansas and swinging across eastern Texas on Highway 259; taking me to the buzzing little Chevron Truckstop at Henderson for the night. It also by-passes Tyler; a town that conspires to stop me at every red-light, everytime I come through.

____Day 3: Four Manitoban trucks are unloading peat-moss at 7 o'clock on a Monday morning: we're all away by eight. But I doubt if any of the others was up and running with a reload before me. Seventy miles North-east to Marshall and 30 pallets of scented candles are safely stowed and sealed in the trailer before 11 o'clock. Then it's back to Texarkana for fuel before retracing Highway 71 to the town of Nevada in Missouri.


____Day 4: Two thousand, three hundred miles; from Texas to Alberta with a load of scented candles. Some would say it's a waste of precious fossil fuel that is denying a future for our children. But it gives employment to workers in Texas and Canada; making and selling them. Wages for the drivers who ditribute them. Ideal for presents at Christmas. Sure-fire sellers at the Summer garage sale and a thrilling 50 cent purchase for some aging hippie. I'll probably be at the tap-end of the bath when it finally gets lit.

____Day 5: Mr. Cooper was also overnighting at Fargo; heading to Logan Lake in British Columbia with mining equipment, loaded in Michigan. A trapped nerve in his back was giving constant pain in his right leg; but Cooperman is "Old-School, North of England." Limping back to Winnipeg and going sick would never cross his mind. I follow him through the border at North Portal as we both push on to Swift Current for the night.

____Day 6: A snow-warning is in effect for south-west Saskatchewan; 25 cms. expected and it starts falling before dawn. Five hours and I'm done for the day; Calgary Flying'J and about half an hour from the RDC at Airdrie. Coops phones to say that the Rockies are getting tricky. Mr.Ramsden has been sitting for two days at the Florida/Georgia stateline; he phones to say that it's 18 degrees C and sunny.

____Day 7: Still snowing when I crawl up to Airdrie and into the RDC for a quick tip, considering the conditions. Then it's down to Taber for a reload of sugar that will get me back to Niverville. A three hour drive with very little sign to black-top. Driving hours are getting short by now and the maxxed-out state of 70 in seven arrives at Speedy Creek; aka Swift Current. Still snowing.

____Day 8: Three 18-wheelers in the ditch before Moose Jaw sets the tone for day: slow and steady. Twenty tons of sugar in the trailer is a great help. Getting dusted by the loose snow in the fast lane is the biggest problem; going to white-out conditions at 60 mph needs a steady hand on the wheel. I can't complain; as I dust-up others when overtaking. As they say on the CB radio: "If you can't run with the big dogs, then stay on the porch." I'm back in the yard before dark.

____Postscript: Mr.Cooper went from Logan Lake to Vancouver for a reload of lumber: eventually coming back over the Continental Divide and into the snow again. He came home about 24 hours after me. Mr. Ramsden reloaded with steel tube in Knoxville, TN. A load for Red Deer, Alberta; he had the snow to look forward to after a week in the Deep South. 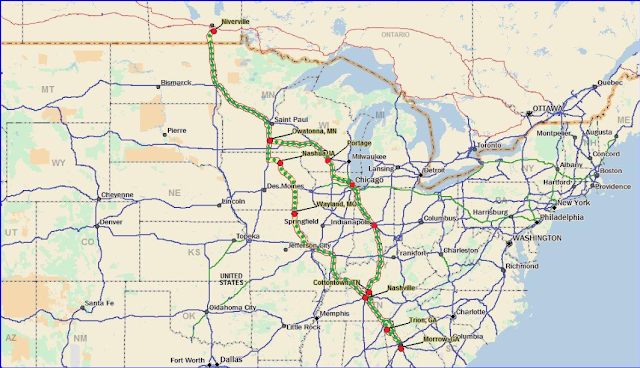 ____A six day trip down to Georgia with a trailer load of used vehicle parts. Nights-out on the way down at Nashua and Nashville. A reload of cotton material from Trion and then to Cottontown for some stainless steel kitchen equipment. A night at Portage had me set up for a long day's drive to home but the office had other plans for the eight foot of space at the back. 9000 lbs of dumbells from Owatonna, Minnesota. But the last pick-up didn't clear customs and I had an extra night-out at the border.
____Overall Distance: 5540 km.