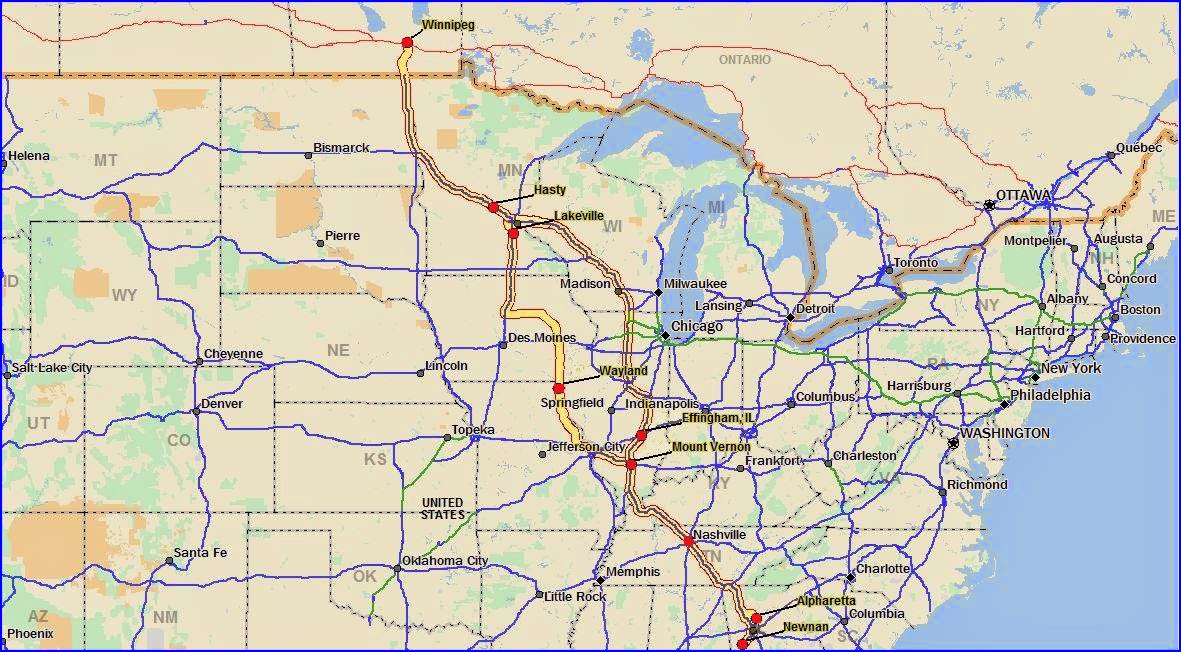 ____ I have blogged about four years of trips since I started and it has been part of my end of trip routine. I did give it a six month break after my sister-in-law died of cancer. I went back to the UK for her funeral and found that my brother was undergoing chemo-therapy; fighting his own battle against the big C. He hadn't told me about it as he didn't want me to worry. Blogging truck-driving trips didn't seem so important.

____ This trip was a little different as I came home to some serious plumbing problems in the basement and the laundry had to wait. As I write this; I am half-way through my next trip and having a log-hours reset in  sunny New Brunswick. It's a job to remember much about the last excursion into the US; except that it was a bit like the old Flying Eagle used-truck-parts loads to Atlanta. Three easy days down,  a six hour unload at Alpharetta, reload Newnan for Winnipeg on the Tuesday. Back in the house; Thursday afternoon as the truck went of  for it's 6-monthly safety inspection.


How many hours of every day?
Is given free and taken away.
From a driver’s hard-earned take-home pay.
The company only earns while the wheels are turning,
So the driver only earns when the company’s earning.
But the hypocrites preach “Safety” a lot.
Whilst “Cents-per-mile” is definitely not.
It's a dangling carrot-donkey situation,
Cause of endless stress and frustration.
A full “Pre-trip” has to be done.
But most expect it done for fun.
Log-books should be neat and correct,
But manage your hours to good effect.
Stop on amber and never speed,
But “Hammer-down” when they feel the need.
Will it end with an on-board recorder?
Will it put this mess in order?
With truckers paid for every hour,
From log-on till their evening shower.

Four-Way Flashers In The Rain. 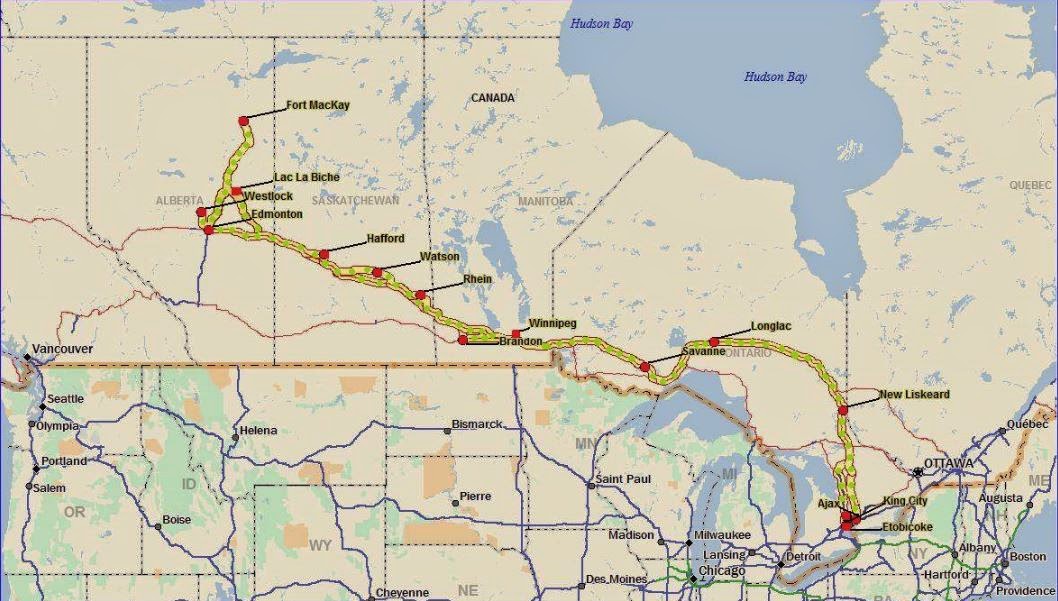 ____ Getting out of a warm bed to go home at 5-thirty on a Sunday morning is not the best way to start a trip. After getting my stuff together and bob-tailing halfway across Winnipeg looking for a trailer; it was 10.30 before I got into cruise control, eastbound on the Trans-Canada Highway. Twelve hours later, I was crawling back into bed at Longlac; 1000 kilometres away in the Canadian Shield.

____ A similar stint behind the wheel on the Labour Day Holiday Monday put me at the King City On-Route motorway service area, just north of Toronto. After battling with the returning cottage-country traffic from Muskoka, I was ready to battle the commuter rush in the morning. Unloaded, begrudgingly, at Mister Grumpy's furniture distribution company, I had a short wait before the reload at Ajax came through. Wall-plaster to be delivered to Fort Mackay, Alberta, by Friday. I advised that it would be Friday afternoon and the office came back and told me that Monday would be fine.

____Then the heavens opened as I headed north out of Toronto in busy afternoon traffic. Why does heavy rain make people drive along with their four-way flashers working? I had slowed down because I couldn't see and was being overtaken by the four-way flashers! Maybe it's their way of saying, "I am a hazard."

____ New Liskeard to the Time Zone Plaque at Savanne on Wednesday had me thinking that I would be home by mid-afternoon on Thursday. Then BEEP; a satellite message asking if I could deliver on Friday; the load was urgent [again]. Mid-day Saturday was the best I could offer; after I'd eased-up when it looked like it was going to be Monday. Hammer down and I was at Syncrude's truck-staging area with an hour to spare.

____ Now, every product taken onto the Syncrude site has to have an identity analysis data-sheet and my fire-proof wall-plaster did not have the necessary clearance to gain entry. So although it was urgent, they turned me away at the gate. Never mind, a parcel delivery company in Fort McMurray agreed to take it and I was empty by three o'clock on Saturday afternoon; ready to run down to Edmonton for what was left of the Weekend.

____ Who the hell finds reloads for dry freight vans out of the Oilsands? Payne Transportation does and it was a good job they told me about it before I headed-off south. Used Caterpillar parts from the dealer at Fort Mackay; load Monday 08.00. So, two nights in the dirty old town of Fort McMurray; with it's complete lack of driver facilities and it's sky-high prices. To think, I could have had two nights in my own bed. It rained all Sunday with a certain dampness also in the cab; as if someone had been pissing-up my back.

____ And the bloody Caterpillar bits only went to Edmonton! Then it was up to Westlock for some of the plastic grain bags. Three farms in Saskatchewan; thank heavens for cell-phones or I would still be looking for them now. But you do meet some nice people on the farms of the Prairies; so different from those jobs-worth shits in the oil industry. The whole trip ended-up with 8686 kilometres in 11 days; so it wasn't too shabby after-all. Except that it snowed on the way home and it's a sign that Winter is just around the corner.

Posted by chris arbon at 8:21 PM No comments: