____DAY 1: Resolute Bay on Cornwallis Island in the Province of Nunavat is having it's own arena. With an average daily high temperature of minus 13 degrees Centigrade, the second most northerly township in Canada; 350 miles from the Magnetic North Pole, is only ice-free and open for deliveries by ship for a few weeks from mid-July. The arena is loaded on five trailers at Brandon, Mb. and needs to be on the dock at Salaberry de Valleyfield, near Montreal, on Tuesday morning. Miss the boat and the air freight costs for BFS will be horrendous; either that or I'm going to be driving a dog-sled. I strap and tarp my load of steel beams with the Province of Manitoba under a severe storm warning. Then eastwards on the Trans-Canada Highway into Ontario and a Saturday night in Dryden.
____DAY 2: Steady progress in steady rain; the only interlude: finding a BFS truck stuck in the ditch just east of Nipigon. The driver had missed the turn-off for Highway 11, gone down a dirt road to turn round and sunk into a very soft shoulder. But my help is not needed as the owner of a nearby excavating company fires up his back-hoe shovel and comes to the rescue. One of many instances of Canadians being more than willing to help people in trouble that I have come across in the short time I've lived here. Sault Ste. Marie looms up as darkness falls, but not before I'm sure I caught sight of a huge wolf lurking at the road side; about to feast on some recent roadkill. 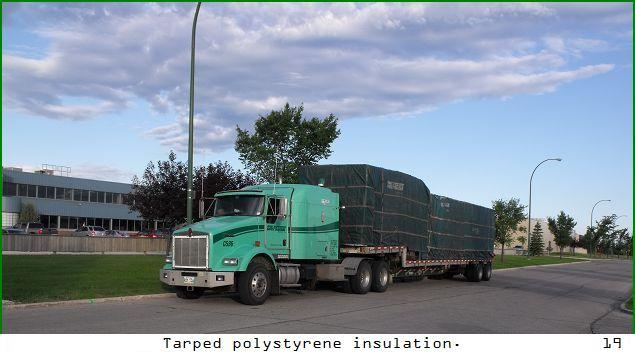 ____DAY 3: Southern Ontario scorched over the long Canada Day weekend. In Western Canada, farmers are complaining that they are tired of watching the rain falling. An Ontario farmer comes on the radio and complains how tired he is after bringing in over 1500 bales of hay on each of the last three days. If that lot catches fire it will be his worst year ever! I run late into the evening, trying to get the cab cold enough for sleeping after the sun as gone down; but by then the Flying J Truckstop at Vaudreuil is packed out. The old Esso fuel station, one junction further on, makes a good alternative.
____DAY 4: Nunavat East Arctic Services operate the ships that deliver everything imaginable to the communities scattered around the Arctic coastline. Their wharf on the St.Lawrence Seaway is a hive of industry as five green Kenworths un-tarp, un-strap and quickly get unloaded, that is, all except me; the trailer with the steel beams has to unload in a different area to the trailers with the big wooden crates; the beams have to be banded onto a container base for shipping. It's 3 o'clock in the afternoon before the big fork lift truck that has been shuttling containers over to the ship has time to come and unload me. In that time I've missed a reload of cable reels to Alberta but a load of insulation to Winnipeg replaces it and the factory in Grande Ile is only five minutes away. With a third day of temperatures over 32 degrees C, it is now officially a heatwave in Quebec Province. Sweat pours out of me as I struggle to make a load-leveller out of my tarps for the polystyrene insulation going on the step-deck trailer.
____DAY 5: Leaving Pembroke, On. I notice I've not received the usual load instructions from the office via the satellite, just the offer of the job. After asking what's happened to them; they arrive. Critically, the load is to be fully tarped; I just smoke tarped it as I had done with previous loads from that factory and my tarps are holding up the two stacks of insulation straddling the step! Not that I have any way of getting them on top of a 13 foot high load. I carry on, with the plastic wrapping on the insulation getting in an ever increasing state of disrepair. Longlac puts me within striking distance of Steinbach for the next day.
____DAY 6: Winnipeg to the Montreal area is a good weeks work with a mileage of over 3000 and the choice of either Highway 11 or 17. Many drivers do this run week in week out, same drops, same pick-ups; these are called "dedicated runs", done by "dedicated drivers". Good miles and good home time, just what young family men entering the road transport industry are seaching for. Not that they get it; it goes to loyal, long standing, hard working brown-noses. Back at Steinbach, I have a plan; jack up the insulation, slide in some heavy-duty lumber as a load leveller, pull out the tarps, put them on top and tarp the damn stuff [ for the final 45 kilometres]. Two hours of sweating and many thanks to Frank for the help.
____DAY 7: At the delivery point, I explain that the problem with tarping step-deck loads is that the wind always gets under the tarp at the step and can cause more damage by flapping about than if it wasn't tarped at all. The bill of lading is signed with four sheets damaged; I'd have bitten your hand off if you'd have offered me that the night before.
____Overall Distance:- 5270 kms.
Posted by chris arbon at 2:10 PM