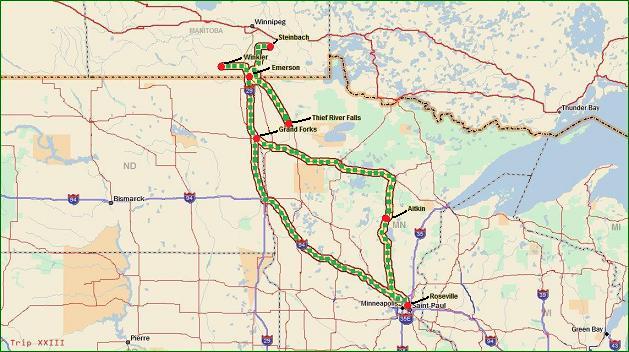 ____DAY 1: Saturday morning and I go to strap, tarp, sort out the customs paperwork for a load of lumber. Afternoon; and on to the 40th birthday party of Carl Strangeway, ex-BFS and ex-Astran owner-driver. One of a handful of truck-drivers who have driven to both Ankara and Anchorage. He proudly displays an 07 Alaska plate on a shelf between his two Saudi Arabian transit plates. A remarkable achievement for someone to have done so much before the big four-O. He does a lot of Turkeys these days, live haul collections of the feathered variety in a daycab. But if you saw the very pretty girlfriend you'd know why he wants to be home every night.
____DAY 2: Noon start and the sugarbeet harvest has started in North Dakota, earlier than the UK because it all needs to be out of the fields before the ground freezes. Stored in huge heated piles and shuttled down to the factories beside the Interstate 29 from now until next spring. Probably America's most boring driving job ever. From Grand Forks, ND. east on Highway 2 to Bemidji, then Grand Rapids and south to Aitkin; crossing the same unremarkable river several times, only the name is remarkable: Mississippi. Flowing less than 100 miles from the Canadian border down to the Gulf of Mexico at New Orleans.
____DAY 3: The truckpark beside McDonalds seems familiar, I'm sure I've done this drop before but can't think where it is. Leave it to the GPS, and sure enough, I'm down the same dead-end as before, confirmed be the same old boy coming out of his bungalow, shaking his fist and pointing down the railroad tracks. It then all comes back to me, the tracks cut the road but the name stays the same, a common problem. A quick unload compensates for all the messing about; then more following of the Mississippi River, south to the St. Paul suburb of Roseville. A reload of steel coils going to Winkler, Mb. Four coils and I only have 2 pairs of coil bunks, the metal cradles that hold the lumber that holds the coil; so they all need to be squashed-up tight and I use all the chains to hold'em down. Minneapolis rush-hour slows things up but I still make it to Grand Forks, ND before my time is up. 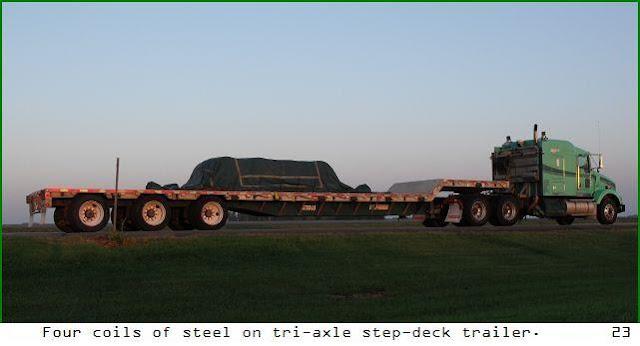 ____DAY 4: The steel is for grain bins, 4 coils because the factory doesn't have anything capable of lifting big stuff. Then back into the US, empty, to Thief River Falls, Mn. All this border crossing; it's easy to forget which country you are in. The language is the same, the traffic, the terrain, the music on the radio, all the same. I don't know why there cannot be a "United States Of North America." Just sprinkle some maple leaves on the Stars and Stripes. The annoying mistake that I continue to make is when I try and pay for food and drink with the wrong currency. I have a wallet for each kind of dollar, which is a good idea, it would also be a goood idea to remember which one to take to the shops. A load of ATVs going to Steinbach for Distribution in Canada; there are plenty of the BFS fleet doing the same run which gives hope there is plenty of work about. Home for the night, not a high mileage trip and I should be away again tomorrow.
____Overall Distance: 1958 Kms.
Posted by chris arbon at 10:01 PM