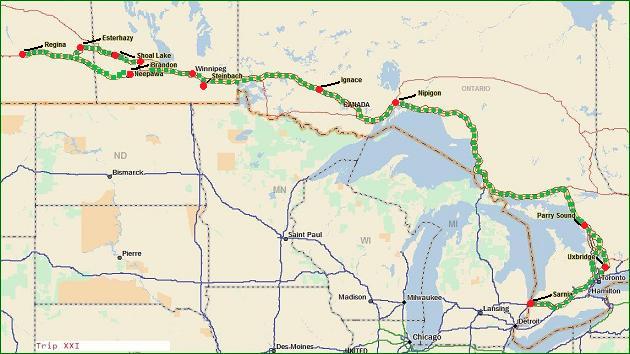 ____DAY 1: Loads of steel love to slip and slide about. One of the best ways to stop it is to thread straps through the layers and hold it down piece by piece. A trailer of steel siding and roofing has come back to Steinbach and is ready to go; strapped and tarped. I know it has nothing through the different packs: it has been strapped over the tarps! Two and a half hours later, on a sweltering Saturday morning, I have it stripped off and redone: my way. Another delay follows, after a shower and change of clothes: the time-consuming ritual of sitting about in the drivers lounge, gossiping with work-mates. Eventually followed by four and a half hours driving to Ignace, On.
____DAY 2: 1489 miles to Uxbridge, On. and three days to get there, so no hurry on a long holiday weekend. Highway 17 along the north shore of Lake Superior with my sights set on Sault Ste. Marie for day-ending fuel and a shower. But my attention is drawn to the low fuel warning light; the level drops dramatically, as if the tank is holed. On inspection; I have plenty of diesel, but is all in the large left side tank which is not the tank from which the supply to the engine is pumped. The pipe linking the tanks must have a blockage; all I can do is park-up and hope it is only a partial restriction and that the levels will even out overnight. 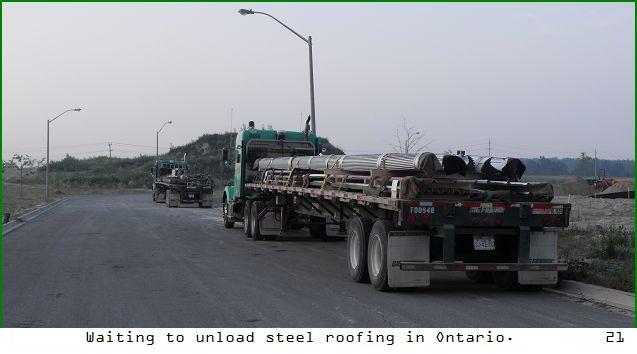 ____DAY 3: The Scenic Overlook parking at Anola Bay gave me a quiet nights rest but no scenery in the morning. Mist and rain drift in off of Superior as I limp into the Soo; an airline into big tank hopefully shifts the muck from the link pipe. Just enough pressure to push through a good flow of fuel; just a low enough pressure not to split the tanks! The problem seems to be cured when I inspect things at Uxbridge; arriving just before sunset.
____DAY 4: Two of the 3 trucks with the new showroom for Viking Trailers are unloaded onto probably the worst laid-out building site I have ever seen. The third drives up when I'm breakfasting at the nearby Esso station. The reload arrives at noon; 200 miles away at Sarnia. Two guys are working overtime at the steel fabrication shop; as it is just one big vessel, loading takes less than twenty minutes and it's only 22,000 lbs. If I'm going to get unloaded on Friday I'll need a few miles today, so i push on to Parry Sound.
____DAY 5: Sarnia to Regina: transiting the USA is 2400 kms. Staying on Canadian soil clocks up 2940 kms. Before 9-11-2001, going through the States would have been allowed but since the fall of the Twin Towers, trucks have had to go the long way round. A thousand kay day on the north shores of Huron and Superior, around to Nipigon.
____DAY 6: Another thousand kilometres to Brandon and the job is looking good. Four hours left in the morning; get unloaded; too late for a reload; they wont want to pay me for sitting about all weekend; run home empty. It pays to think things through on this job and the Esso at Brandon has free internet and a Tim Hortons next door. 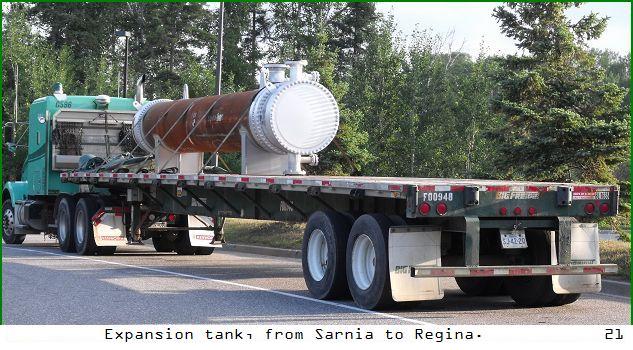 ____DAY 7: The parking lot is jammed solid; more than it's fair share of ice cream loaded trailers with fridges revving their bollocks off; livestock haulers having their cages rattled while farm yarding-up the atmosphere and the usual paranoids who fear their engines wont start in the morning. It takes some seriously precise manoeuvring to wriggle 70 foot of truck and trailer out onto the Trans Canada Highway; all before I've washed the sleep from my eyes. Unloaded at just before noon at the Co-op Oil refinery on the outskirts of Regina and BEEP. No, not a reload at the dreaded Fleury Street? Yep and collect 50 empty Polaris crates as well. Half a trailer of crates and three drops of building materials that are scheduled for Saturday morning delivery. Loaded and with nothing to lose; I crack on for Esterhazy. They are still open and I get unloaded; letting me doorstep the second drop at Shoal Lake, back into the province of Manitoba.
____DAY 8: Two packs of decking lumber delivered and onto Neepawa; two more packs of decking and just the crates to go back to the Steinbach yard. Rolling up at two in the afternoon wasn't what I expected but you can never figure out this job with any degree of certainty. Plus side: the yard is stacked out with loaded trailers. My next load is to Etobicoke in Ontario, a town named after Nigeria's second choice goalkeeper at the 1994 World Cup.
____Overall Distance:- 5936 kms.
Posted by chris arbon at 9:23 AM