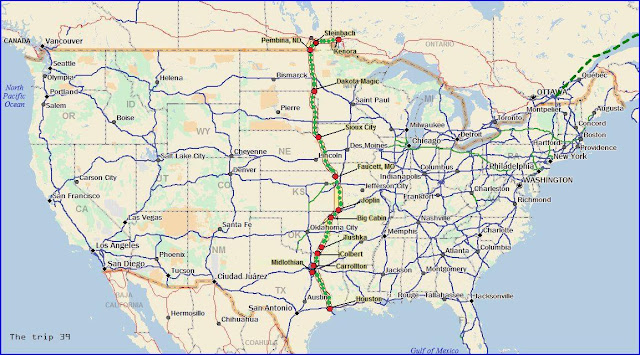 ____Day 1: My tax rebate for 2010 arrives in the post. It’s like getting all your night-out money for one year in a lump sum. To celebrate, I take my accountant’s receptionist out to lunch; an annual meal with the sweet young Mexican cutie that is turning into a tradition. Then into work to find a suitable trailer for a load of lumber; going from Kenora in Ontario to Carrollton, Texas. Only step-decks are available; so I take one over to the sawmill, ready for loading in the morning. 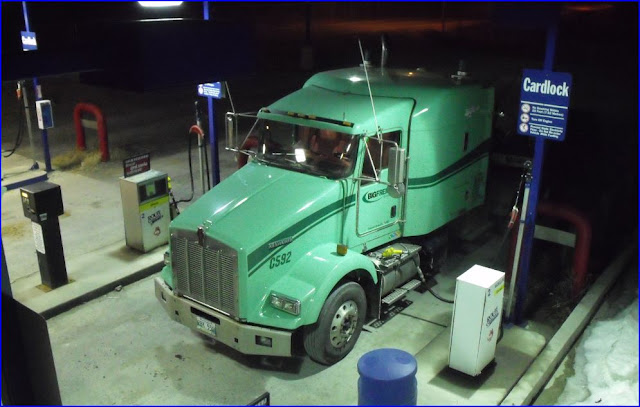 ﻿ ____Day 2: With some mathematical calculations, the 32 foot lengths of timber are loaded to legal axle weights at the first time of asking. Fourteen hundred miles to do in three days; so over the border at Pembina and down to the Dakota’s border. Kellie Pickler is the main attraction at the Dakota Magic Casino. Tickets are $40 each and no, I haven’t heard of her either so I make do with the four-piece covers band in the lounge bar.
____Day 3: The wet snow of Friday evening is Saturday morning’s frozen crusty ice rink. Interstate 29’s slow lane is tricky; the fast lane is deadly. But by Sioux Falls, three hours later, temperatures are positive and it’s dry roads for the rest of the day. Finishing at the Farris Truckstop just north of Kansas City.
____Day 4: With the State of Oklahoma on the agenda, The prospect of shelling out for their toll roads looms large. I don’t want to take the side-roads, that takes too long; so does going all the way round. I have a plan: Highway 71 from Kansas City to Joplin, then $8.50 of the Will Rogers Turnpike towards Tulsa, followed by the four-lane Highway 69 down to the Texas border. A storm blew through the southern states; killing over 40 people. On Thursday, a tornado touched down in the small town of Tuskla on Highway 69. The place has been devastated; buildings ripped apart and pieces scattered everywhere, an eighteen-wheeler laid on it’s side, the tops of trees torn away and a trailer park trashed. Only the other week, I was thinking it would be neat if I could get a photograph of a funnel cloud; but after seeing what the force of a tornado can do, I don’t care if I never get close to one.

﻿ ____Day 5: It’s a short run from Colbert, on the Oklahoma-Texas border, down to the north Dallas suburb of Carrollton. The efficient Weyerhauser Group lumber yards always get you unloaded in half an hour if you wear all your personnel protection equipment and arrive at your appointment time. Soon I’m on my way to Houston to collect steel from the docks; calling in at the middle of Midlothian for some hardwood dunnage. During the balmy evening at the Flying’J truckstop, I am overwhelmed with a feeling of trepidation. The words: “docks” and “steel” stir up ghosts from loads past. Long gone names: Victoria Deep Wharf, East India Dock, British Steel Ebbw Vale, British Steel Velindre. Memories from over thirty years ago; the many hours spent waiting and cursing the idleness of my union brothers. Would those fork-lift drivers be working today if they had not been such lazy bastards? I know I’m still working.
____Day 6: My fears are confirmed by the large, early-morning, multi-racial scrum at the heavily fortified check-in window. A sign prohibits the carrying of concealed handguns. BFS C617 driver, Roger Coffin is there too; a problem shared is a problem halved. Steel comes from Korea by ship and is laid out on the dockside in an area the size of Belgium. I have five bundles to collect from three locations; South-west Yard, Wire Yard and “Q” Yard. In the three hours that it takes for the fork-lift to come to me, I have walked round and found all my bundles and am the last truck to be loaded before lunch-break. Roger is still empty, but cheerfully comes over and helps with my tarping in the 35 degree heat. As payment, I leave my pipe stakes with him; much needed when trundling around the site with half a load of unstrapped steel. I reach Dallas in the rush-hour and in a thunderstorm; pushing on back into Oklahoma for the night.
____Day 7: Often, I am asked, “ What is the most important item to carry when driving Long-Haul?”

Just lately it seems as if I am paying to go to work. Apart from the usual stuff like tolls, faxes and scale tickets; I’ve been forking out a lot for dunnage and polythene sheeting. Luckily I avoided the $100 fee at Houston docks, which is charged to non-union drivers who are loaded direct from the ship. The load is going to Winnipeg, so I retrace my southbound route; north to Sioux City by the end of the day.
____Day 8: Enough driving hours to get home, even with the Red River trying it’s hardest to become the Red Sea. Flooding closes the Interstate 29 with a detour via Grafton. Then back in Canada; Highway 75 is closed at Morris with a detour via Winkler which adds another 200 km onto the long day. It`s Easter, so back to Steinbach for three days off.
____Overall Distance: 5660 km.
﻿