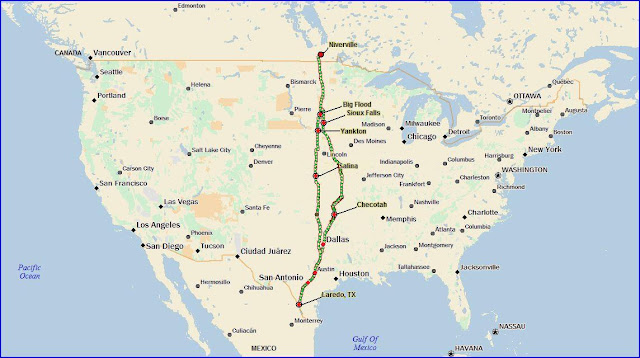 ____Day of the Wedding: Kevin and Melissa`s big day went very well. A first ever open-air ceremony for me in the grounds of Steinbach`s Mennonite Heritage Village. Surreal; in that the preacher wore shades and also that the man in the tinted eye-wear was Jim Penner, the driver-training guy at Big Freight Systems. I spent the whole of the service thinking of how Big Jim could integrate some marriage vows into orientation.﻿
``Repeat after me:  I  : the gullible new driver......to have and to hold secure, causing no damage.....for better or for worse depending on miles.......for richer or for poorer depending on miles....to love, honour and obey my despatcher........till death does us part...... not!``
﻿
____Day 1: The peat-moss was loaded by a day-cab truck and needed the trailer axles sliding forward to get the excess weight off the drives. With the gross weight near to the american maximum of 80,000 lbs; not an easy task. Eventually underway and down to the Flying`J at Sioux Falls.
____Day 2: The second day into a headwind, but it`s all four-lane with not many hills. A thousand kilometres through Iowa, Missouri and into Oklahoma. Another night-out at another Flying`J: Checotah on Highway 69.
____Day 3: Into Texas, through Dallas, Austin and San Antone. To the twin truckstops of Laredo; a Flying`J and a TA, opposite each other. Full to over-flowing with taco stands doing good business at the roadside. The CB is full of offers, cheap DVDs and shuttle rides across the border for a good time. Been there, done that and came back with my tail between my legs.
____Day 4: Almost all the truck traffic coming down to Laredo has stuff for Mexico. But because of restrictions by the insurance companies, no Canadian or American trucks cross the border. All loads are transhipped onto Mexican trailers at warehouses along the banks of the Rio Grande. My peat-moss was off-loaded at one such place. The reload was four miles upstream; thirty-nine cement mixers, waiting on a Mexican trailer. Transhipped by six-thirty and I`m northbound upto New Braunfels for the night.
﻿

____Day 5: It`s a much lighter load and to vary the route; I follow the old Chisholm Trail, Interstate 35. Named after Jesse Chisholm, Indian guide and speaker of nine languages, a man renowned for his honesty and fairness who actually never drove any cattle along the trail that bears his name. Taking a westerly route through Kansas up to Salina for food and fuel.
____Day 6: A lot of the day on Highway 81, straight north until it cuts across the Interstate 29 at Watertown, South Dakota. Through flood water stretching for two miles; showing how severe the weather can be on the plains. Finishing at the Stamart Truckstop, Fargo and the Northstar Truck Wash; number 31 having a high-pressure hose-down for the first time.
____Day 7: Not much left to do, three hours back to the yard with the cement-mixers going on to Winnipeg on Monday.
____Overall Distance: 5500 km.
Posted by chris arbon at 12:19 AM