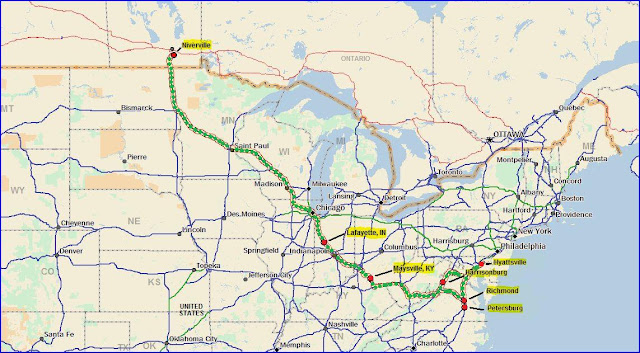 ____Day 1: I leave the yard with Christer Gustafasson right behind me﻿; after the border, he comes past in the old-school flat-top long-hood flat-deck pulling multi-hyphenated Peterbilt and disappears on his unlimited way to Florida. Eagle 31 is limited to 104 kph, but with the flat terrain and only 13,000 lbs of cardboard tubes in the trailer; it's an easy cruise down to Osseo, Wisconsin.
____Day 2: The Sunday before the US Memorial Day holiday; a distinct lack of trucks on the road and in the truckstops. This trip is two drops, 1700 miles, so another nine hours at the wheel cuts the journey neatly in three: to the TA Travel Centre just south of Cincinnati.
﻿
﻿

____Day 3: Across Kentucky on the strangely named, AA Highway, which my Garmin GPS trys to tell me is not a truck-route. It has truck-lanes on all the hills; so I know different. The Garmin is good, but not perfect. Most of the truck-specific information is spot-on; having the road's speed limit on the screen is handy, so are the warnings of sharp curves and steep hills. It's just that the loud klaxon, blasting out of the speakers, as the truck comes to a long steep descent; is very disconcerting. Harrrisonburg, Virginia, is my first drop; I arrive at dusk.
____Day 4: A quarter of the load for Harrisonburg and I'm away north to Hyattsville in Maryland. Cutting through Washington, DC, for the first time; delivering to a sprawling service town on the edge of the capital. It's hot work unloading the big cardboard tubes which are used as an easy way of shuttering a hole that is going to be filled with concrete. Wet with sweat, on a record-breaking hottest last day of May, I'm grateful to learn that my reload is not until the morning. So it's south on the busy Interstate 95 to Richmond's TA Truckstop, a shower and a chance to try out the "Tri-Pac."
____Day 5: Thermo King's Tri-Pac auxiliary power unit gives a driver the comfort of air conditioning [or heating] independent of the trucks big diesel engine. The little diesel engine can run all night on very little fuel to keep the sleeper-cab at a comfortable 20 degrees C. Only problem: the DUB-DUB-DUB noise from exhaust; louder than the big Cummins and irritating to the neighbours. Two wooden cases of refrigeration equipment from Richmond; then 10 miles south, to Petersburg, for 22 pallets of oil seals. Homeward bound; to the crowded West Virginia Turnpike services at Beckley for the night.
____Day 6: After so many years in this business; I have developed a sixth sense for knowing when I am being fed bullshit. I have room on the trailer for two more pallets. The office has found two pallets from Lafayette, in Indiana, going to Winnipeg; only problem is that I will be going past the pick-up at three in the afternoon and the load won't be ready until 10 o'clock in the morning. Does the office explain all this to me and ask me to park-up and wait? No, they give me a load of crap about not getting confirmation of the loading address until the morning. Instinctively, I know I'm being taken for a fool. First thing, Monday morning, I will be in the office; asking what is wrong in telling the truth. But an early finish does give me time to get out on my new folding bicycle for some exercise.
﻿
﻿

____Day 7: The final part of the load brings my gross weight up to only 70,000 lbs, so the rig can fly home. Except that it is Friday and the urban sprawl of Chicago has to be crossed, south-east to north-west. There are plenty of driving-hours available on the log, as I've had a couple of shortish days. A long final stint at the wheel gets me to Olson's truckstop at Hasty, Minnesota.
____Day 8: The electronic read-outs on the truck show the fuel consumption to be 7.2 mpg; up from 6.4, on the previous trip. Conclusive proof that the weight of the load is the biggest variable factor on how much diesel is used. Last time, it was 40,000 lbs, both there and back: this time; only 40,000 all told. I got back to Niverville and the low-fluid level warning light still hadn't come on. Showing that DEF usage is dependant on the fuel used and not the distance traveled. Second trip finished and again the truck never missed a beat.
____Overall Distance: 5667 km.
﻿
﻿