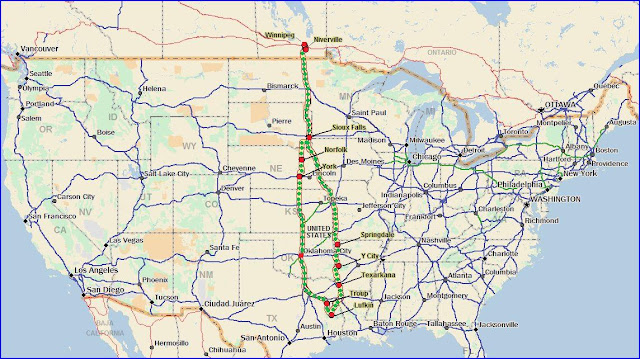 ____Day 1: No Cougar on this trip; so it's back to my sad, boring lifestyle. Breakfasting in different diners every morning; driving different roads every day; drinking in different bars every evening; sleeping with diffferent women every night. But that's not quite true: I have a load of peat moss for Troup, Texas and a reload from Lufkin to Winnipeg. Same run as six weeks ago; same roads and probably the same hookers knocking on the cab door. An early Sunday start; aiming for Cubby Bear's truckstop at Norfolk, Nebraska but then pushing on to York, to make things easier.
﻿
﻿ ____Day 2: Athabasca, Shipshewana, Apalachicola; fine examples of the Place-Name Fairy's poetic inspiration, but how did she come up with Troup? Two full days driving from the yard, with a full payload. Another early start, in order to finish early so I can start early and all to get a load of dirt delivered on time. An early evening run across the Dallas/Fort Worth sprawl to finish the day just up the road from the nursery.
﻿
﻿ ____Day 3: It does help when you know just what to do at drops and pick-ups; saves time. Peat moss unloaded, abrasive powder loaded then into the nearest truckstop. Scale and slide the axles; diesel for the truck and de-bug the windshield; shit, shave, shower; fax, phone and food. In and out in 90 minutes with a quart of iced-tea to go. All that puts me on a collision course with the D/FW evening rush; so north on Highway 59 to Texarkana and the picturesque Highway 71 through Arkansas.
﻿
﻿ ____Day 4: The powder is booked in for unloading at 1700 hours on Thursday; so the job now has plenty of time on it. And as so often happens; nothing gets done. Fart-arsing about on the Internet for far too long, twice. Getting detoured off Interstate 29, twice. The flooding Missouri has still not gone back in it's banks.
Finally into the Flying'J at Sioux Falls.
﻿
﻿ ____Day 5: Two days south has turned into three days north; still over 800 km to do. But at a daily average of over 900; it's a good earner for the week. Back over the border and into Bison Transport's warehouse, along side Winnipeg's airport. The truck is now due another service; it needs a wash too. Too many bugs on the bumper.
____Overall Distance: 4752 km.
Posted by chris arbon at 11:29 AM