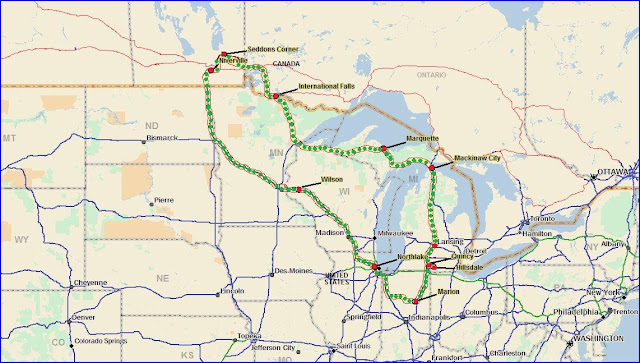 ____Day 1: Pete Moss is my co-driver yet again as I go and load the posh dirt at Seddon's Corner; fourteenth truck of 15 going to Quincy in Michigan. Away at midday; heading into Ontario before crossing the border at International Falls. A host of different hauliers that all have several hours start; most of them going via Pembina and the Interstate 29/94 route. But I welcome the change of scenery; finishing the day at Nemadji in Wisconsin.
﻿
﻿ ____Day 2: Once upon a time; a sleeper cab was just a day-cab with curtains and pieces of foam-rubber making a bed across the seats. After that; I had far too many nights with my arse against the glass; on the shelf behind the seats of a Volvo F86. Now I have fitted sheets on a 80x40 inch mattress and two queen-sized blankets. To celebrate: I have an extra hour in bed; listening to the rain beating down on the 63 inch sleeper and thinking about the " Good Old Days." I'm not going to get ahead of the other loads, so take it easy. Across the Upper Peninsula of Michigan, from the south shore of Lake Superior to the north shore of Lake Michigan, before crossing the Mackinaw Bridge and down to Lansing.
﻿
﻿ ____Day 3: As I thought; there is a wait to get unloaded. But no-one has a reload closer than me; Hillsdale, only 10 miles away. Unfortunately, only one pallet; I'm on LTL again. Other pick-up addresses follow, but I only get as far as Marion, Indiana; coils of wire that don't get loaded until after dark.
____Day 4: A frustrating day as only one more of the potential pick-ups gets through the back doors and onto the Alberta-bound trailer. The fruitless waiting in the heart of Chicago on a Friday afternoon is the last thing I need and the office senses this. It's a long hard slog in heavy traffic; as far as Wilson, the Kwik-Trip Truckstop with the popular Friday night seafood buffet.
﻿
﻿ ____Day 5: Still plenty to do; with the Twin-Cities, the 94 across Minnesota and the 29 North from Fargo to the border. Cruise-control all the way at 65mph; only three-quarters of a load and light traffic. Breakfast at Sauk Centre's Trucker's Inn and interesting conversation at the counter. What is a good driver? Is it someone who never gets a fine because he never breaks the rules? Or is it the one who breaks all the rules and regulations, but is clever enough that he never gets caught? Lots of different views on that one until a driver comes out with; " The only good driver to a company boss is one who makes him lots of money." We all agree on that; with several having the opinion that some drivers don't realise that making money for the boss has anything to do with trucking.
____Overall Distance: 3838 km.
﻿
﻿
Posted by chris arbon at 9:06 AM