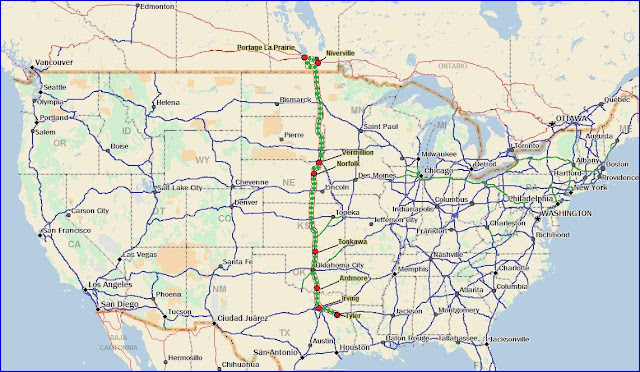 ____Day 1: Decision of the day; go to work on Saturday evening or leave it until early Sunday morning? It's an eight a.m. appointment to load at Portage Le Prairie; flour going to Texas for Tuesday morning. Lots to consider; but after a very late Friday night-out, I go for an early night in the cab on the customer's doorstep.
____Day 2: Loaded and away; on the Labour Day long-weekend. Very few trucks on the road and most of the truckstops are empty as companies get their drivers home. A full 11 hours driving needed with the rig right up to the 80,000 lbs legal US weight. Interstate 29, then Highway 81 south to Norfolk, Nebraska, and Cubby Bear's truckstop. Where even the good ol' boys, who pass comment on every vehicle at the pumps, are taking a break from their regular table.
﻿
﻿ ____Day 3: A combination of parking on muddy ground and stopping with the slick section at the bottom; lets me get to the Kansas/Oklahoma border before I spot a trailer tyre with the wire showing. Love's Truckstop at Tonkawa is a convenient 20 miles away on Interstate 35; the tyre shop has used trailer tyres for $150 + $57 for fitting and tax. A good result considering it's a Holiday Monday; a blowout with the inevitable call-out would have been five times that: about the same as a DOT fine for a rusty tyre. But the three hour delay only lets me get to Ardmore; still 105 miles from the delivery point at Irving.
____Day 4: Flour delivered and 90 barrels of hydraulic oil loaded at Tyler; two hours east of Irving on Interstate 20. I'd seen the billboards advertising Soulman's BBQ, but never thought about stopping until I read Plumtrucker's blog write-up. At Van, I scale the load of oil and there is a Soulman restaurant right next door to the Love's Truckstop. Nearly 3 o'clock in the afternoon, but they are still busy serving lunches and what good food it is. The meat is slowed-cooked with all the fat still attached, then trimmed-off before it is served; making it moist and tasty. The baked potato is huge and of a proper baking variety, soft and fluffy; not just some big spud that's been cooked in an oven, hard, waxy and better-off chipped. The place is nothing fancy, with a self-service counter, but my beef sandwich and tater could not have been bettered. I drive back to the Flying'J at Ardmore; thinking how wonderful it would be if all fast-food was that good.
﻿
﻿ ____Day 5: The load is going to Edmonton, but I'm just taking it back to Niverville. It will be in Alberta on Monday, so no hurry. All the same, it's two full days driving back north. Temperatures are still in the 90's during the day, but  the night's are now much cooler as we get into September. Ideal for sleeping, which is just as well, the Tri-Pac, independent air-conditioning unit refuses to start. It's still under warranty but I've never had much faith in the reliability of small diesel engines.
﻿
﻿ ____Day 6: After 1100 kilometres, I'm left with just eight-hundred to finish the trip. A stop at the Northstar Truck Wash in Fargo puts two hours on the day but takes off a hundred-thousand bugs and butterflies. There is not another single truck at the Emerson border crossing so I'm back in the yard by 6; another Texas: done.
____Overall Distance: 4633 km.
﻿
﻿
Posted by chris arbon at 11:47 AM