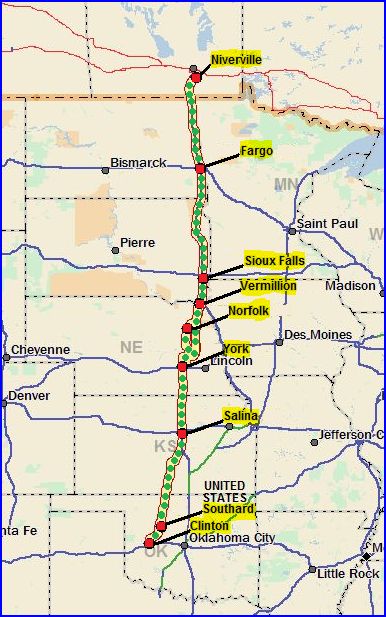 ____Day at the Races: The last meeting of the season at Asssiniboia Downs, and the sixth time that I have managed to fit in the horses with my work. Ten races on the card; of which two pay out. Not a profitable day but fine Autumn sunshine on a Sunday afternoon. A big crowd and big fields; as all the trainers seek that final win for their owners.
____Day 1: A load of flax to Oklahoma; the first time I have carried this product of the northern Prairies. The seeds from the low blue flowered plant that is also grown for it's fibre. A heavy load of 50lb paper sacks bound for a pet-food production plant, 40 miles west of Oklahoma City. South on the familiar Interstate 29 to Vermilion, before cutting across to Highway 81 and an overnight halt at Norfolk, Nebraska.
﻿
﻿ ____Day 2: After fuel at Salina; I take side-roads through rural Kansas and into Oklahoma. An area now experiencing an energy boom on three fronts. The high price of oil makes it economical to sink wells and new pump-jack sites are everywhere. Wind-turbines group together on the high ridges and the corn-fields are being harvested for the production of ethanol. An interesting afternoon drive down to Clinton; avoiding the toll of the Kansas Turnpike Authority.
﻿
﻿ ____Day 3: The flax-seed is unloaded promptly at the pet-care place; where it is used in the more expensive cat and dog foods as a fatty-acid oil that combats the growth of tumours. The medicinal properties of flax have a history going back to BC 3000. Then comes the news that the reload is at Southard, only 40 miles away but not available until the next day. However, Clinton does have an adequate truck-stop and is also the home of the Route 66 Museum of Oklahoma. Interesting exhibits and details of the Mother Road's history with old black and white films showing in the movie theatre.
﻿
﻿ ____Day 4: If the south-bound load was heavy; the north-bound load of gypsum plaster is even heavier. Scaling at 79,950lbs with the tanks less that half full of diesel. At the first DOT weigh-bridge; I sit at a red light for a long, long time before it thankfully flickers to green. Maybe the green was due to the fact that the truck is equipped with the Tri-Pac auxiliary power unit: a lot of states now give a 400lb allowance for the anti-idling donkey motor. The load is going to Saskatoon; but only to Niverville with #31. To the Flying'J at Sioux Falls for the night.
﻿
﻿ ____Day 5: Interstate 29 all the way home. Any serious long-haul trucker will tell you that the Flying Eagle job is a good one. But there was one thing that had been niggling me: I was on a lower pay rate than other drivers. Something that I was willing to endure for my first three months and it was partly my fault as I presumed I would be paid the same as the others. I had never spoken to the office about money; but after 4 months, I felt it was time for a quiet word. And whoosh and zoom; I get a pay rise of half of one cent per mile, to take me level with the others. So would I have jacked in a good job because of such a small amount? Damn right I would; there was no way, after thirty-six years in the industry, that I was going to do the exact same work, for less pay, as a couple of Welsh blokes.
____Overall Distance: 3535 km.
﻿
﻿
Posted by chris arbon at 10:13 AM