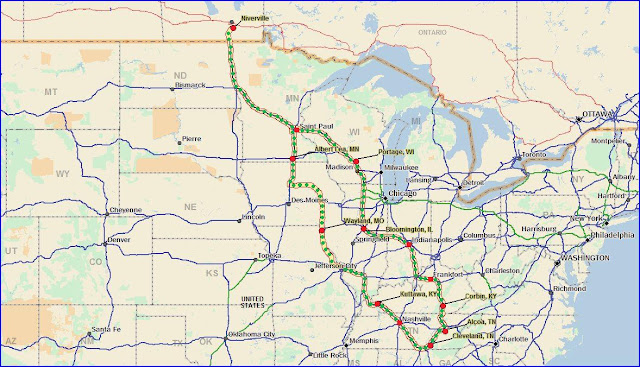 ____Day 1: Some hard work for a change. An early morning delivery appointment in Tennessee and more than two days worth of driving to get there. Alarm clock time. Away from the yard early Sunday morning with Portage, Wisconsin in my sights for the first night-out. A heavy trailer full of empty beverage containers; going to be re-cycled.

____Day 2: Chicago; early on a Monday is an off putting thought, so I swing south on Interstate 39 and then Interstate 74 to Indianapolis. Little time for  breaks during the day as I have to finish early in order to start early. The Pilot Truckstop at Corbin, Kentucky, leaves me with about 100 miles. But at least early finishes give me a choice of parking stalls.

____Day 3: Alcoa the company and Alcoa the town; destination of the aluminium at seven-thirty; six-thirty eastern. A strange unloading arrangement where the Flying Eagle trailer is taken by an Alcoa tractor unit and tipped. Literally tipped up in the air to let the bales of crushed cans slide out the back. Then to Cleveland for the reload and a problem never encountered while pulling a flatdeck. Insect infestation of the trailer. Hundreds of small black flies attack the forklift-truck driver and it takes a trip to Walmart for the purchase of some spray. Finally loaded after lunch I have enough time to reach Kuttawa, back in Kentucky.

____Day 4: Huck's truckstop has a special offer on "Dash Cams" and at $79.99; I'm tempted. It works straight out of the box. A neat little gadget that is up and running all the way to Albert Lea. An over-night temperature of 22 degrees drops during the day to just four. It rains during the night.

____Day 5: The rain turns to snow. I continue with the early starts but it doesn't get my through Minneapolis before the weather stops the commuter traffic and Interstate 494 grinds to a halt. Near white-out conditions persist all the way out of town on the 94. A two hour breakfast at Hasty lets the worst of the storm blow through. From then on it is hard-packed snow most of the way to Fargo with plenty of trucks in the median or in the ditch. A long day; back in the yard by six.
____Overall Distance: 4986 km.