The FlorTexMan Trip to St. Somewhere. 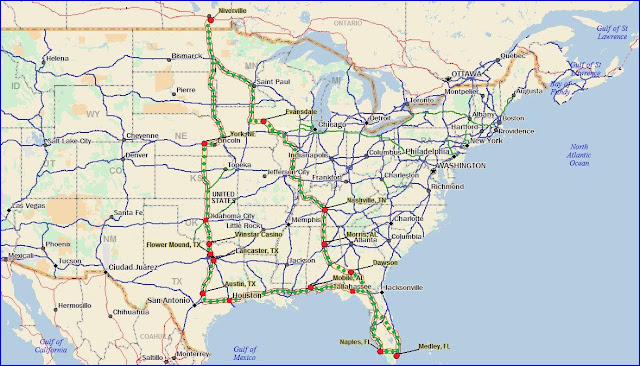 ____Day 1: Any Manitoba based long haul trucker will tell you that Texas is good miles. Florida is even better. But not many would have done a round trip that takes in both Texas and Florida. But on a Saturday afternoon in late April that's what I set off to do. Getting down to York, Nebraska, for the first night with just a few snow flurries in South Dakota to liven up the day.

____Day 2: With the first drop situated just north of Fort  Worth; I don't have to push on all the way into Texas. The Worlds Second Largest Casino, the Winstar, on the Oklahoma border will do fine. On a fine Sunday afternoon and a couple of beers in the Toby Keith Bar and Grill.

____Day 3: Chaos engulfs the whole of the first drop at Flower Mound. I arrange to meet a guy at the junction of Interstate 35 and  Farm to Market Road 1171; I head to Interstate 35 East/ FM 1171, my guide goes to Interstate 35 West/ FM 1171. I phone and tell him I don't need a guide; I have GPS. He says that it's a job-site in a gated community and I will need him to get in. OK, see you there. I beat him to the gate. The wrong gate! Tradesman's entrance is for trucks and I've passed it by a mile. They won't let me come in and turn round so I have to continue along a narrow road and turn round in another gated community which has a much nicer gate-keeper. Finally inside; things don't get any better. I can't the truck within half a mile of the house which being constructed on a lake-shore connected by a narrow tree-lined track. The windows are trans-shipped, a few at a time, onto a pick-up truck for the last leg of their journey. Thankfully delivery number two at Lancaster is quick and easy but the four hours at number one stops me getting to number three before they close.

____Day 4: I've done the Austin delivery before; so park on the un-loading dock overnight. There's nothing worse than parking on the door-step only to wake up and find some early bird has relegated you to number two. Next: 2098 kilometres to delivery number four in Naples, Florida. A run along the Gulf Coast that affords the drive no view of the sea. Houston, Baton Rouge and to the eastern side of Mobile, Alabama, on a day of a thousand kay through the rice fields of America.

____Day 5: A thousand kilometres in Florida, making the state crossing longer than should be expected. Busy roads around Tampa and the west coast. Another series of phone calls setting up an early morning rendezvous in a Walmart car-park as it seems another in-accessible job-site is waiting for my windows. There are worse places to stay over-night than Walmart car parks, which normally tolerate trucks, but they normally don't have alligator warning signs like the one in Naples.

____Day 6: One roadkill alligator and the snout and eyes of a live one in a river are spotted on US Highway 41 on the way across the Everglades from Naples to Medley, a suburb of Miami. If I had more time, I would have stopped for the experience of an air-boat ride. Plenty of air-boat tour establishments on the ninety mile crossing of the swamplands. The last consignment on the trailer is destined for the Dominican Republic; going to a shipping company before be containerised for the sea journey. Reload is in Alabama; so another 4-figure kilometre day, to Dawson in Georgia for the night.

____Day 7: Across country on US Highway 280 to Birmingham; then north on Interstate 65 to the small town of Morris. Deliver Austin, load Morris makes me think I'm a Rover on a Mini-tour. A heavy load of refractory powder for Selkirk, Manitoba. Enough time to reach Nashville; where I find I have only one and a half hours left of my weeks 70 hour work allowance. An hours re-set is needed. First evening: Downtown, drinking with runners, in town for Saturday's Nashville Marathon. Surprisingly out late on the eve of the race.

____Day 8: Heavy rain through to late afternoon keeps me cab-bound; missing the after-race street party on Broadway. But Rippy's is ticket-tout central for the next door concert venue. Jimmy Buffett is in town and as the one-time owner of a battered V-Dub Combi who spent many Summers barefoot on the Riviera; I have always been a fan. The aging hippy on the sea-side of the country music scene knows how to entertain. Lining up in front of three drum kits and a full backing band; the place rocks. There is a tribute to the people of Boston and the marathon runners of Nashville who have defied the threat of terrorism. The passing of George Jones is honoured by a rendition of  the classic, " He stopped loving her today." The band's rhythm guitarist does such a perfect imitation of the country music legend's voice that the audience is stunned into a jaw-dropping silence. The arena fills with emotion.

____Day 9: Nashville has to  be my number 1 all time night-out location. Amsterdam, Barcelona, Istanbul have an edge that makes the adrenalin flow. Dublin and Vienna are friendly and safe but Music City USA has it all. Live music bars and restaurants that buzz seven days a week, reasonable prices and a top class truckstop within walking distance. But I have to leave; two days driving back to Canada with day one finishing at Evansdale in Iowa.

____Day 10: Minnesota is the fifteenth State of the trip and as the trip counter clocks up 8000 it becomes my longest Flying Eagle tour. The heavy return load hits the fuel consumption figures but the truck doesn't miss a beat.