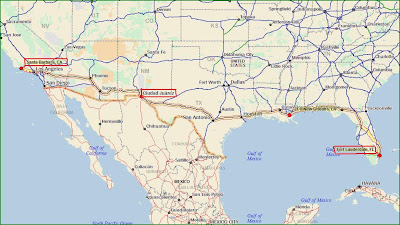 ____ It was a six week holiday, working as an unpaid car delivery drivers for various "Drive Away" agencies. First job, after flying into Washington, DC. was down to Miami, Fl. Next a big one; Fort Lauderdale to Santa Barbara, California. A day off in New Orleans and Bourbon Street, checking out the jazz scene. Then across Texas to El Paso; where my mate Tim suggested that we had a once in a lifetime chance to pop across the border and have a Mexican cutie.
____ We left the car at our seedy motel and crossed a bridge over the Rio Grande, on foot, to the town of Juarez. After a  few beers in a few bars; we wound up in a house where all the girls were scantily clad in ragged chamois leather wash cloths. Twenty dollars upfront and I wound up in bed with a young, olive skinned, raven haired beauty with the biggest doe deer eyes and slenderest hips; ever. Tim was in the bedroom next door; where, unbeknown to me, he had a pee out of the window. Sprinkling onto a Mexican policeman who was relieving himself down in the alley. The irate cop stormed upstairs and kicked in the wrong bedroom door, my bedroom door.
____For a minute I thought I was dead; but my little darling was brilliant in stopping him giving me a beating. Unselfishly, she put her naked body between the fuming officer and my naked body; presumably insisting, in Spanish, that I could not have possibly been responsible as she had been  sitting on my face, giving me head, for the previous ten minutes. Then the house security piled into the room, chaos and confusion reigned while Tim quietly slipped away without being noticed. Sadly I didn't get to finish business with the sweet senorita, for which she looked as genuinely disappointed as I was. I was thrown out, but not before I was forced to cough up $100 to pay for the repair of the bedroom door.
____Ps. When doing "Drive Away" in pairs, always pick up your next car before dropping off the last one. That way you won't get stranded without wheels and have to rely on public transport or hitch-hiking.
Posted by chris arbon at 9:53 PM