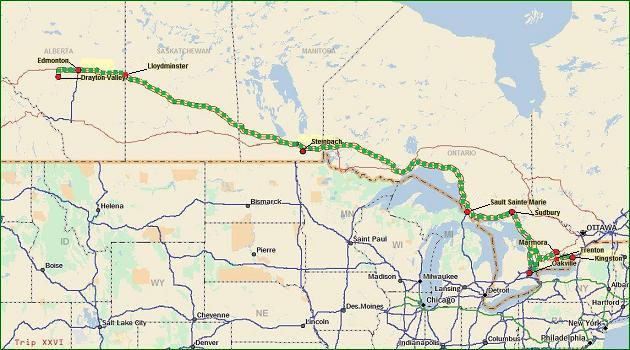 ____DAY 1: Three o'clock on a Tuesday afternoon and I'm leaving for Ontario; six drops and 1592 miles with a load of snowmobiles and ATVs. I'm not in the best frame of mind, as all the out-based drivers that were stuck in the Steinbach yard over the long weekend have been given priority over the local drivers. Now it's going to be a  long, hard slog to make sure I am available to be reloaded on Friday morning. Pass Lake is as far as I get before calling it a day.
____DAY 2: Twice in four years, I have not been reloaded on a Friday; which is not bad. Once, stuck for a boring un-needed hours reset at the Flying'J, London,On. The other occasion, on the lash with Big George and Jason. At Niagara Falls, where we pretended to be the Great Britain Chuck Wagon Racing Team; team manager, driver and farrier on a horse buying expedition across North America.
"Gee Honey, you can shoo a horse?"
"Nope, but I once told two dogs to fuck-off."
One ATV is all I get delivered; at Sault Ste. Marie. The Sudbury dealer has gone home by the time I get there. 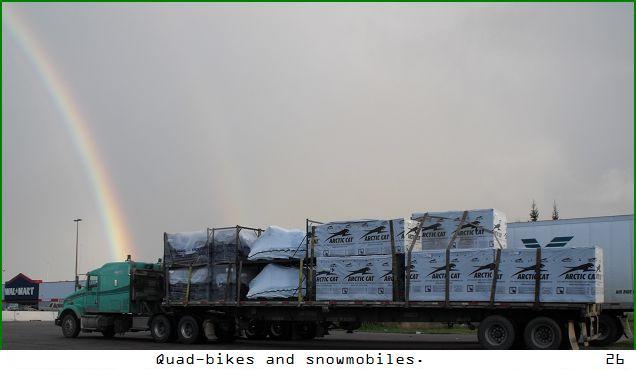 ____DAY 3: After the five units for Sudbury are delivered, I decide to change the running order; taking the faster 4-lane 400 series Highways to Trenton instead of hacking across country to Kingston on a 2-lane road. It pays off, I'm at Trenton before five. Belleville next and my favorite type of dealer; a farm machinery dealer with big drive in, drive out premises; competent fork-lift driver and they are open longer and later than the marine dealers and the motorcycle showrooms that also sell sleds and quads. Four down, 2 to go: better than expected.

____DAY 4: One ATV at Kingston, unloaded as soon as they arrive for work and onto the last drop at the fine town of Marmora. Where it is the weekend of the 9th Annual Music Jamboree; what a great time and place to be stranded. Three days of both my favorite kinds of music: Country and WesBEEP: A reload message arrives. Preloaded trailer is waiting at Oakville, On. going the 2107 miles to Edmonton, Ab. for Tuesday delivery. Marmora to Oakville, across Toronto, as the Friday getaway rush begins to build: strap and tarp steel roof panels, then back into the traffic.  A stop and go crawl northwards to Barrie; finally getting
into top gear as it thins out after I split for Sudbury.
____DAY 5: With only 17,000 lbs of steel, the truck cruises well; taking most hills with just a touch of the button. I stop for coffee at White River: Where It All Began. Birthplace of a black bear cub that was taken  by a Winnipeg soldier to England when he went to fight in the First World War. The bear finished up in London Zoo, where it was a favorite of Alan Alexander Milne who wrote the Winnie the Pooh stories. Sadly, twice within the next 100 miles, I see young black bears dead at the side of the road; victims of road kill. Yet earlier in the day, I had anchored up for a fine mature bear; who, on hearing the automatic transmission rev the engine down through the gears, had scampered away as if it knew of the threat that a vehicle posed. Back to Pass Lake for the night and Wi-fi at the reasonable price of $1.00 per hour.
____DAY 6: Trans Canada Highway all the way, straight past the turn-off to Steinbach,; which is something I don't normally do but it will leave too much to do for the next couple of days if I go home. The truck passes the 750,000 kilometre mark, in the same week that 10,000 hours ticked up on the other dial. It is a 2007 model that came on the road in September '06. About 187,00kms/ year at 75 km per hour = 2,500 hours.
____DAY 7: Pure Prairie day on a four-lane highway, pushing on to the Husky truckstop in Lloydminster on the Saskatchewan- Alberta border. Where once again I find myself speaking Russian; a ploy I use to ward off down-and-outs seeking a handout of small change and to deter super chatty truckers from telling me every single detail about their last months work. However, it is not a complete success with complete know-it-alls who insist on telling you what a crap outfit you are working for. Repeatedly; getting slower, getting louder.
"Big-Freight-Rub-Bish: No-Good-Company."
"Da, lev yashin brezhnev rebrov schevchenko." I reply, which roughly translates to," Yes, old goalkeeper big eye-browed leader half-decent strike partnership."
He turns away muttering that he is wasting his breath; under my breath, I mutter, " Pratt."
I have always thought that "Trappers" was a strange name for a trucking company, but wouldn't dream of telling anyone. 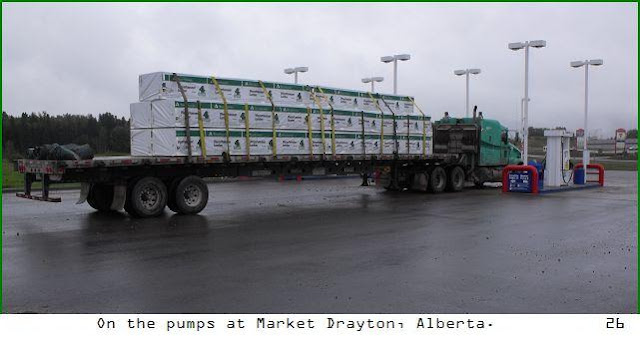 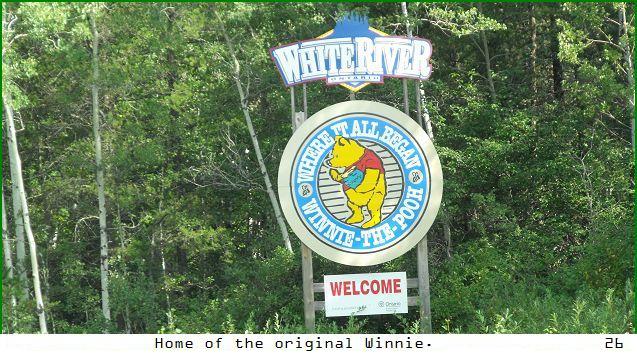 ____DAY 8: The roofing panels don't take long to unload, even though they are 50 foot long and the reload  details turn up on cue. Problem is....... It's a load of lumber into the States and any driver who has had a busy week, driving in Canada, can't legally go south without a log hours reset. The US regulations cut 10 hours out of a Canadian drivers week. I have to refuse the job, but I do add that I can bring the load back to Steinbach for re-powering. This is accepted, so it's off to Drayton Valley for ten packs of 18 foot long 6"x2" I'm heading for home when BEEP: Pick-up 1 pallet of concrete blocks from Acheson, deliver to Lloydminster. My route takes me past the front door of both places, so it difficult to refuse the job although there is nothing in it for me. It is the little pure profit jobs like this that make or break a company in this day and age. But I must be more mature and not tease the office about whether I can be bothered to do their irritating little jobs. The Totem Building Supplies superstore is still open when I reach Lloydminster; they respond well to my charms. I'm unloaded and away in less than 10 minutes.
____DAY 9: Still a long way to go and it's just too far for the amount of hours I have left on the logs. If you average 10 hours a day in Canada or 8 hours 45 minutes in the US, in theory you can run about for two weeks without having to worry about driving time. But it is never that simple and I'm left with just enough time to get to Brandon.
____DAY 10: I get the last three hours done as soon as possible. Another truck is waiting for the load and C596 is booked in at the workshop for a service and it's 6 month safety test, also the air-conditioning unit still needs repairing. Remarkably the days have recently been quite cool and the night temperatures down into single figures but if I had landed a trip to Texas then I would have had the truck into the nearest Kenworth dealer faster than a Ferrari.
____Overall Distance:-7732 kms.
﻿
Posted by chris arbon at 1:34 PM