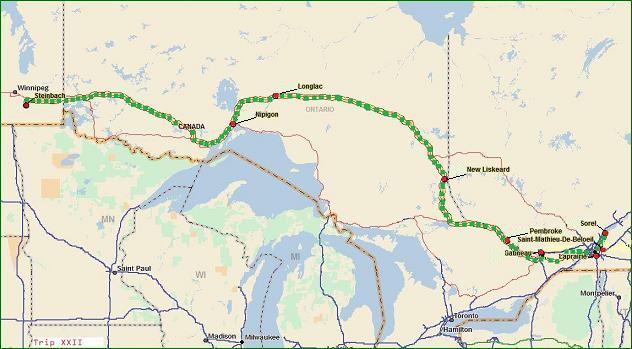 ____DAY 1: A late start and precious daylight running lost as I head east on the Trans-Canada Highway with tarps billowing and flapping in the wind. It's a good job the speed limit at the DoT scales is 3 mph, the tarps just hang limp, tattered and torn. On into Ontario and the town of Longlac for the night; a little short of one thousand kilometres for the day.
____DAY 2: The destination of this load had been changed since I picked it up, but only by a few miles. At 2 o'clock in the afternoon, the delivery time is changed. From 12 noon it is moved forward to 08.00 am. Four hours is a lot when it is the next morning; I can save two hours by taking an eight hour break instead of ten but even as I push on as far as Pembroke, I can't see it happening.
____DAY 3: Away as early as possible, I now catch all the traffic in the Montreal rush hour. It's half past 9 when I reach St. Mathieu de Beloiel and what do I find? Three more BFS trucks all waiting to get unloaded! It is nearly 4 o'clock in the afternoon by the time I am empty. Not happy, but the reload is at nearby La Prairie and not until the next morning. Then at one o'clock in the morning someone bangs on my cab door. I try not to get angry in these situations; there must be a reason for it. A driver needing my assistance? A pretty young lady needing my companionship? I get dressed and go through to the front; nobody there. But there is a bright green light shining from my dashboard; my reversing spot lamps are still on from when I parked up. My thanks go out to the unknown person who saved me from flat batteries. 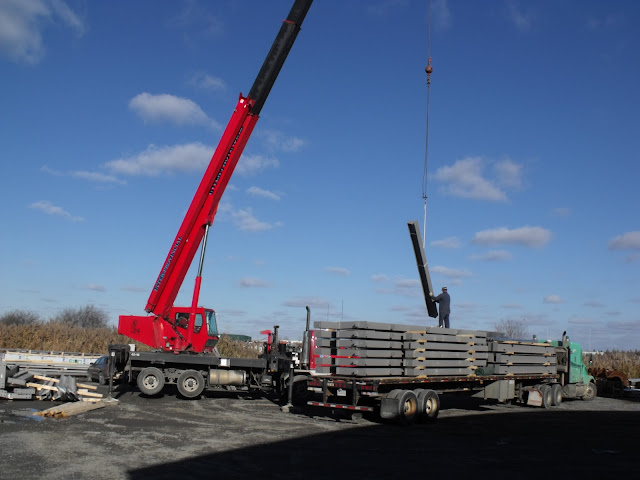 ____DAY 4: Over at La Prairie, they look at me as if I'm stupid when I'm told my load to Winnipeg was cancelled weeks ago. Three hours later a replacement job comes through on the satellite receiver; five pick-ups of the empty reusable steel crates that  Polaris use to ship their snowmobiles and ATVs. First is Sorel, one hour away, no problem; then Gatineau, where they look at me as if I'm stupid, they sell the Arctic Cat make of ATV that comes in wooden crates. It's getting late when the correct address comes through; I go across town in the hope of getting loaded. Too late, which is just as well, because there is nobody to look at me as if I'm stupid. They sell the Cam-Am Bombardier make of  ATV and snowmobile which also comes in wooden non-returnable crates. I'm not waiting until morning for another address and leave Gatineau; making it as far as North Bay as I head for New Liskeard.
____DAY 5: Tritown Motorsports has a huge stack of empty Polaris crates. At last something on this trip is going in my favour! With 24 from Sorel and 96 from New Liskeard the trailer is now full; no need to call in at Timmins and Cochrane; hammer down for Steinbach. All day I have a raging thirst; drinking five of a Gatorade six-pack. I put it down to the peameal ham that is always the breakfast special at the North Bay Truckstop. Do try my newly invented cocktail; one part Cointreau to three parts Lime/lemon Gatorade over ice. OK, so they were the only two beverages I had in the appartment at the time but I think I have stumbled onto a classic. Easy to make, easy to drink and finding a name was a piece of cake too. I call it "Gateau", except in the French speaking Province of Quebec, where it will be known as "Gatineau."
____DAY 6: A cold start to the day at minus 6, a morning when staying in bed, covered by a duvet and two thick fleece blankets, seems the best option. But it's a full days drive from Nipigon to Steinbach and it has to be done. Bright and breezy with a late afternoon high of 10 degrees C; the empty crates are a fairly light trouble free load. Back in the yard just after five o'clock, unstrapped and trailer dropped; home by six.
____Overall Distance: 5192 kms. 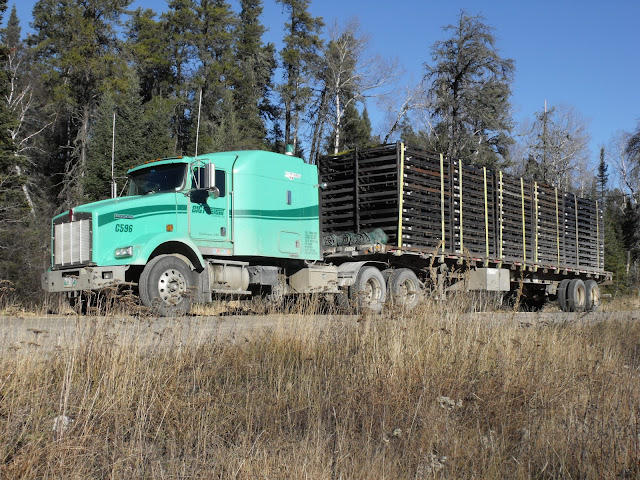