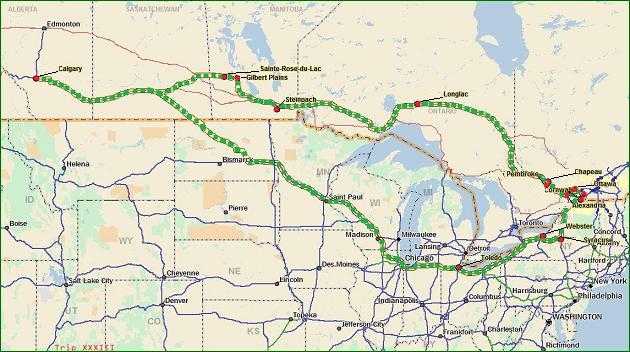 ____DAY 1: The Ontario-based driver, Couch-John, is on the sofa with his feet up in the driver's lounge when I arrive for work. He was broke-down in Kansas for five days last week; limped back to Steinbach and the truck died again. Couchie tells me that I have been given his load, 8 drops in Quebec and Ontario. A load that he was due to leave with on Saturday; to get him home for the public holiday on the coming Thursday. Now I have to do 1424 miles plus the deliveries in 3 days; thanks to a lemon of a truck. I do 600 miles to Longlac on the Monday.
____DAY 2 : There is a fine line between getting good miles by being a hard working reliable driver and being " the go-to-guy for mission impossible." This load needs to be delivered by Wednesday afternoon so that the truck is available for reloading on Friday morning, after the holiday. Not easy; but I have to go for it, or sit about for the weekend. Another 600 miles to Pembroke and an evening spent looking at maps and making plans.
﻿

﻿ ____DAY 3: A good early breakfast at the Irving Big Stop, then across the Ottawa River into Quebec for the first 3 drops, Chapeau, Fort Coulonges and Shawville. Back into Ontario for the Ottawa city Polaris dealer. In a strip mall next door to a charity thrift shop; the rear parking lot is full of late-model prestige European saloons. As the womenfolk of the capital's good and great come to donate. Just enough room to get 75 foot of Kenworth in amongst the Mercs and BMWs. A well dressed middle-aged woman comes over to ask if her X5 is parked in my way.Oh so obvious that she fancies a bit of rough; it's a shame that I'm on a mission.
I knew I would need a bit of luck along the way and it comes at the fifth drop. Ottawa airport, a snowmobile due to be air-freighted to the far north; I'm just in time to get unloaded before the shutter comes down  before lunch. Rockland, Alexandria and finally on to Cornwall; all unloaded by five o'clock. A night at the Fifth-Wheel Truckstop and the Mexican buffet. 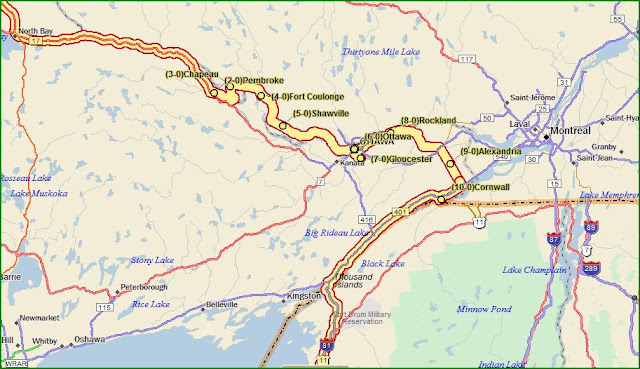 ____DAY 4: Remembrance Day, not a holiday everywhere and BFS has some office staff working. Reload details arrive at midday: Webster, in New York State, 2414 miles to Calgary, Ab. and 250 miles of empty running for an eight o'clock pick-up on Friday morning. Into the US at the 1000 Islands bridge, south to Syracuse and then along the south shore of Lake Ontario towards Rochester.
____DAY 5: The loader is as surprised to come across an English truck-driver as I am to come across an Australian fork-lift truck driver.
"I hardly noticed your limp, mate, who cut off the ball and chain?"
All good colonial fun. But the load is far from funny: thin gauge steel profiles, up to 20 foot long. Maximum weight of 46,000 lbs, stacked 7 foot high off the deck; it takes all my straps to wrap around every bundle so that none of them can slide forwards or sideways. Then it has to be tarped before I can get back on the New York Thruway, heading west through Pennsylvania, into Ohio and as far as Toledo.

____DAY 6: The Weather Channel is showing a big snow storm in the states of Minnesota and Wisconsin and Interstate 94 will take me right through it. I contemplate staying to the south on Interstate 80, to avoid it, but it's a long way round. I gamble on the snow-plough drivers being eager to put in two early season weekend shifts and that the Interstates will be their priority. There is plenty of snow about by the time I park up at Wilson, Wi. but it is not freezing, just wet.
____DAY 7: An early Sunday start; I need to do another 1000 kilometres today and another 1000 tomorrow. Snow flurries continue throughout the day but the cold wind keep the roads bare and dry. Back into Canada, at North Portal, Saskatchewan and up to Estevan's Husky Truckstop for the night.
____DAY 8: The last leg of the run to Calgary and the snow continues with the temperature hovering at freezing point. My delivery address shows as north-west Calgary, but as there is no-where to stop on that side of town, I choose the Flying'J; situated on the south-east side of town.
____DAY 9: Overnight snow and a temperature drop to -10 has left the tarps with a white crusty coating. It still hasn't blown off by the time I have crawled across town in the early morning rush-hour traffic. I am even more disappointed when I see my carefully tarped load of bright steel profiles are going to be stored outside in the snow. The reload is the typical Calgary to Winnipeg load; pallets of sand and cement with two other drops in Northern Manitoba to fill up the trailer. It takes the rest of the day, creeping around town on hard packed snow, to get loaded. Then it's back to the Flying'J for a shower and a walk over to the Wildhorse Inn with Matthew from C556.
____DAY 10: The roads are still bad when I head out of Calgary on Highway 22X, picking up the Trans-Canada Highway at Siksika. Conditions improve by the time I get to Saskatchewan, but at Swift Current the day gets decidedly worse. The scale is open! It had been boarded-off when I came past on Monday. Now the repair man is working on the westbound side and he has already finished the eastbound. Two DoT officials are checking it out and I am their first paying customer. $510 for being 1430 kgs overweight on the trailer axles. I tell them I will move some of the metal corral panels to the front; which will make things legal. It's hard work; they are heavy and it's slippery on the frozen tarps. I take it slow; hoping another BFS truck will stop and give me a hand. I have moved five panels by the time the scale operatives decide to go home; they say the load now looks good and I can continue on my way. They have long gone by the time I have re-strapped and reweighed; I've only moved 400 kgs but I'm outta there.

﻿ ____DAY 11: I cannot leave Yorkton until 10.00am, as I still need to be driving at midnight; due to the 22.00pm delivery of the sand and cement in Winnipeg. Fourteen hours is the maximum time allowed in a shift. The two metal corrals are for Gilbert Plains and Ste.Rose; both Coop Agricultural Depots. The guys at these places are a delight to work with; always quick and helpful, plus they aren't too bothered if the odd panel slides off and comes crashing down in the road. It is near blizzard conditions when I deliver the sand and cement; the Home Depot guys don't seem to too bothered either. My unloaded pallets are put under a canopy; by the time I pull out, they are covered with snow. It's a slow drive back to Steinbach as freezing rain replaces the snow and the wind shield wipers turn to blocks of swishing ice.
____Overall Distance: 7855 kms. 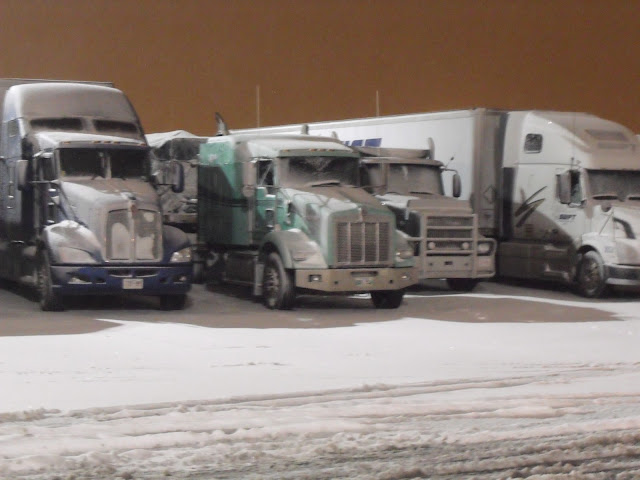