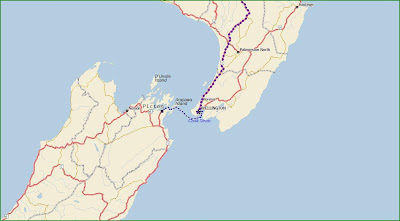 ﻿ ____ Christmas Eve, a day at Te Papa, the National Museum of New Zealand. Down by the waterfront, a short walk from the hotel, so the bike has a rest day. Very interesting displays on the Natural History of the country before Europeans arrived. Also a lot of stuff on Maori culture, with impressive ocean-going canoes up to 70 foot long. In the evening I rendezvous with my cousin Paul; who I had met in England during his big European tour with his wife Judith. That was in 1988. My Uncle Len too is there, he left England when I was 4, I cannot remember him but we had a good long chat about the old country. We went to the same school and although he left 20 years before I started; we had the same history teacher, Mr. Stanley Kaye, amazing.


_____On Christmas Day I am invited to eat at Esther and Scott’s, a cousin I had never met and her husband. Also James, another cousin and his family are there. An excellent Christmas dinner on a hot sunny day with plenty of cold beer in a hilly suburb of Wellington.

_____ Up early on Boxing Day, down to the quay and on board the Interislander ferry to the South Island. A three and a half hour crossing of 90 kilometres; a long haul out of Wellington harbour, a long stretch in the Tory Channel leading into Picton harbour. Only just over an hour on the open sea; crossing the Cook Strait, nice; my kind of ferry crossing. Picton is sunny, breezy and a South Pacific Island band is playing in the park. I decide to camp in Picton and start the journey south tomorrow.
﻿ 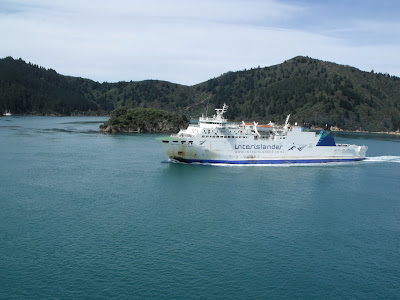