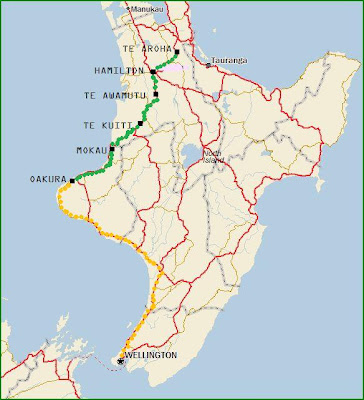 ____From Oakura it’s a short ride to the busy port of New Plymouth, the largest town since Wellington. Back on Highway 3, it is much busier with a lot of trucks making their way to and from Auckland. The level terrain finishes with the stiff climb over Mount Messenger, then ups and downs along the cliffs to Mokau. A night at the Whitebait Inn, which has a grassy area at the back for tents and does good fish and chips.


____Starting off at sea-level and heading inland; I know I’m in for a day of climbing. The Awakino River Gorge delays it for the first hour but soon the road climbs out of the steep tree-lined valley on to rolling hills of grassland. The area is called the King Country, after the stronghold of the Maori kings. I camp at Te Kuiti, the town that was the old capital.

____The weather is much more humid as I cycle north; the nights are not chilling down and although there is constant cloud cover and little sunshine, I still have to use plenty of sunscreen due to the depleted ozone layer above New Zealand. Hamilton looks like a hard days ride from Te Kuiti; so I settle for Te Awamutu, camped among a whole load of polo pony people; without ponies.

____A short days ride up to Hamilton, New Zealand’s largest inland city and fourth overall. I cannot believe a town this size can warrant so many coffee houses in the downtown area; none of them looked busy and they all looked too pricey. However, the city centre campsite was shady, clean and reasonable.

____Flat arable farmland from Hamilton, north-east on Highway 26 to Te Aroha. With a break at Morrinsville; I’m still camped out by 2 o’clock. Just in time as the wind gets up and the rain comes in over the hills to the east. 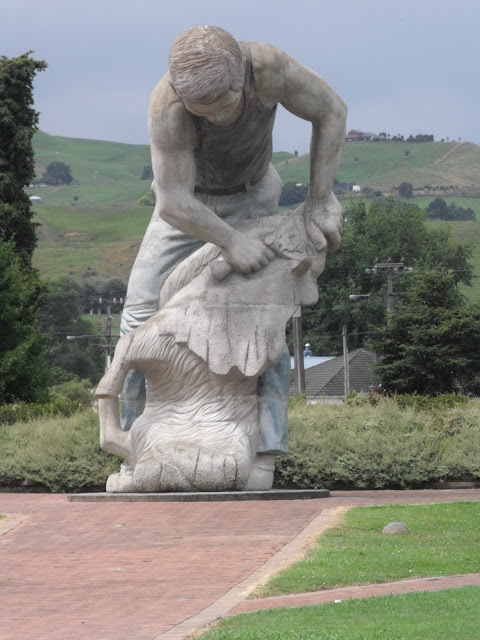