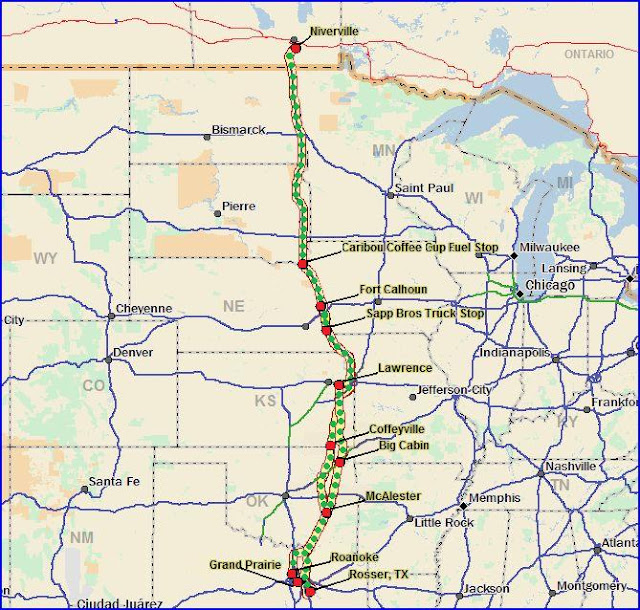 ____Day 1: Weather forecasts for the mid-west, plains area of the USA are usually very accurate. So when a Winter-storm warning is given for Nebraska and Western Iowa, I know there is going to be plenty of white stuff. The job needs a full 11 hours driving for two days if the peat-moss is going to be delivered to Rosser, Texas on Monday morning. The best option is to stick to the Interstate Highways, they get snow-plough priority and if they do get blocked; there are a lot more truckstops to rest in. Nine inches of snow falls but I keep going to reach the Sapp Brothers Truckstop at the Iowa / Missouri state border.


____Day 2: Clear skies and bare / dry roads as I skirt the western side of Kansas City; taking the US Highway 169 south to Tulsa before Highway 75. A $6.50 section of the Indian Nation Turnpike brings me out at McAlester, Oklahoma, then Highway 69 and some more 75. Through the heart of Dallas, out the other side on Interstate 45, arriving at Rosser to find I am the third Manitoba peat-moss truck in the village.


____Day 3: It's a distribution centre for peat-moss, run by a small haulage company, who soon have all three of us empty and on our separate ways. My first re-load pick-up is in Grande Prairie, with a telephone number   to call for directions. On the third attempt, I speak to an over-friendly load-broker who says the place is difficult to find because it is on 110th street and not Carrier Parkway as I was told. Also the company name has changed from APD to LQT. Incredibly, I am hearing this from the person who gave out the original information. Later, he phones the office and complains that I was rude; after I objected to being groomed as the next truck-driving boy-friend of some old Texan poofter. I thought about calling him to say that my snipe bar would go so far up his arse that he wouldn't shit-right for a month; but that's probably just what he wanted to hear. With the re-conditioned engines loaded; my next pick was14 pallets of toys from Roanoke, a job I had done before. Then North to Big Cabin for the night, on my way to Lawrence, Ks.


____Day 4: I don't always maximize the whole of the possible 11 hours driving-time, sometimes I will finish short at a place I know; for the food, a shower and a quiet night's sleep. Parking by the lake at the Big Cabin Travel Plaza is a favorite. Away at 08.30, to Lawrence for one heavy crate that's going to Edmonton. Then to Fort Calhoun in Nebraska; another pick-up that I have done before. Which is just as well; because, for the second time in 4 pick-ups, I am given the wrong company name and address!


____Day 5: The Caribou Coffee Cup Fuel Stop at Vermillion is always a good place to wake up; the skinny Latte is as good as any from Starbucks. Then it's the north-bound Interstate 29, homeward-bound, and a chance to see how much wax can be extracted from two ears, by one bent paper-clip, in 500 miles.
____Overall Distance: 4586 km.