____My first memories of British truckers abroad are from the early eighties when a gathering of drivers at the Italian Customs was a weekly occurrence. I soon came to know the regular places where a table of Brits could be found on most nights. The Bake House at Bourg-en-Bresse and the Monkey House on the way up to the Mont Blanc Tunnel; Carisio, on the Autostrada between Milan and Turin.


____Places where a driver could relax amongst friends; knowing that someone was watching his back and would get him back to his cab if he overdid the alcohol. Good food and cheap drink were an important element at all the traditional stops; that and the managements’ acceptance of the often rowdy behaviour.

____To the British truck-drivers on the run to the Middle-East; these watering-holes had a much more significant meaning. They were places where useful information could be obtained from drivers coming in the opposite direction. Road conditions, the weather, the waiting time at the various border crossings, could all be digested during an evening meal in the Eastern Bloc and beyond. Places like the Motorest at Plzen and the Hotel Rokycany in Czechoslovakia. Not many British drivers went past the Windmill at Kecskemet, Hungary or the National Hotel on the outskirts of Belgrade. Most drivers stopped if they saw a GB plated truck, any where.

____ Parking on the beach at Kavala was also popular; but the number one overnight halt was the Londra Camp on the western outskirts of Istanbul. Ample safe parking, a chance to grease the truck and get anything fixed; a chance to relax and let off steam before setting out across the Bosporus and the hard work that lay ahead. The TIR parking at the Harem Hotel was another favourite, along with the Teleks Motel at Ankara. 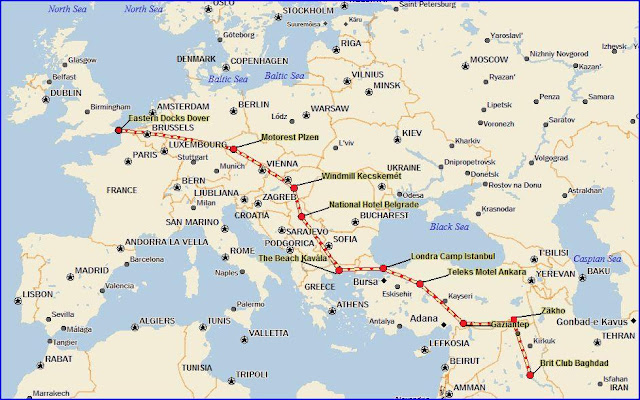 ____ British Ex-pats across the world always meet somewhere in every sizeable city. Truck-drivers in Istanbul would frequent the Pudding Shop, located in the heart of the city, but were often out numbered by British, Australian and New Zealand backpackers. When I lived in Augsburg, Germany, it was an Irish Pub called Murphy’s Law and that is typical of many places today. The Lonely Planet and Rough Guide books often give an Ex-pat place where English is the spoken language.

____ For the British truckers of Steinbach, Manitoba, Canada; Frantz Bar, on the outskirts of town, is the meeting place most Friday and Saturday nights. Christmas Eve, 2011, saw more than a dozen drivers enjoying a drink and a chat with a chance to play a game of pool where everyone knew the right rules. A meeting that was set-up with just a short message on Facebook.

____ The two biggest changes to truck-driving that have happened since I started, must be the cell phone and the internet. The days of being out of contact with the office have now gone. The grapevine of verbal information being passed from driver to driver is now done by a Bluetooth Headset. But is it a good thing? Sure, most of the truck-driving Ex-pats in South-east Manitoba are my Facebook friends, but the Internet has also been the cause of a lot of problems between my friends.

____ The Internet also gave us Ex-pat truck-driver forums which was always one sack of vipers that I thought I would never put my hand in. But I have done; with the hope of getting more blog readers and with the well-intentioned desire to answer some questions on life and work in Canada. A big mistake.

____Ex-pat truck-driver forums have got to be the most nasty on the planet. If the pen is mightier than the sword; then the lap-top key-board is mightier than an AK47 in the hands of a trucker. They make me want to go back to the good old days. But hang a minute; I remember the good old days, when you got a bunch of drivers and a lot of drink in a room together. Always, if there was any trouble, it would be the British drivers fighting amongst themselves. Same as it ever was.