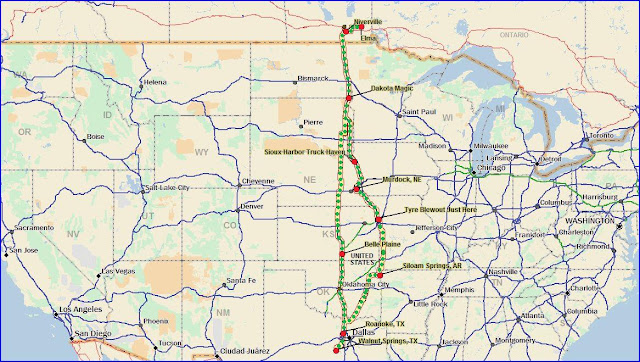 ____Day 1: While I was on my log-hours reset; # 31 went to Regina to rescue a trailer from under a broken-down unit and came back smelling like a dirty ashtray. Sad that some truck-driving smokers have no consideration for non-smoking truck-drivers. A run out to the peat-moss mine at Elma to start the trip. Then through the border at Pembina; finishing the day at the Dakota Magic Casino on the North/South Dakota's border. I come out with $25 more than when I went in; winnings that can finance the purchase of some No Smoking stickers.


____Day 2: Texas is the destination [again] and with 400 miles already done; two days hard slog will now be three days of easy driving. Highway 81, all the way from Watertown until Interstate 135, leading on to Interstate 35 at Wichita, Kansas, and a night at the Belle Plaine service area. Resisting the temptation of the newly opened Kansas Star, an enormous casino complex right by the interstate.


____Day 3: The satellite picture option on Google Maps has got to be one of a truck-drivers most useful tools when looking for a delivery or collection address. The delivery address for the plant nursery at Walnut Springs just gives me the number of the "Farm to Market" [FM] road, but with my laptop I can see the poly-tunnels, the packhouse and a trailer parking area. It's getting dark when I turn down a winding, muddy dirt track but I know that in two miles I will find the plant nursery. Either that or a secret dope growing enterprise hidden away from everything except surveillence satellites.


____Day 4: A quick tip and the bill of lading is signed, so I'm not bothered what they grow. First pick-up is four pallets of toys, from Roanoke, the same as the last trip. Then a two hour wait at the nearby Pilot Truckstop, while the office searches for more freight in the Dallas/Fort Worth area. Finally instructions send me to Arkansas for a pick-up in the morning. If there is a truckstop within 20 miles of a collection, I will stay there overnight, but if I don't come across anything; then I park at a shipper's premises. Such as at Siloam Springs.


____Day 5: Brake-drums loaded and away to Nebraska for the third and final pick-up. Then just north of Kansas City, there is an almighty BANG. A rear axle trailer tyre blows and the tread whip-lashes through the mud-flap; pulling the mud-flap hanger onto the one remaining tyre. It's a narrow shoulder on a busy Interstate but I have to get the angle-iron hanger away from the tyre before anything else. Thank heavens for sliding trailer axles. By strapping the mud-flap hanger to the bumper bar, at the rear of the trailer, I pull the hanger back by reversing the truck; whilst the axles move forward on the trailer. After moving to a safer spot at the next off-ramp; father and son team, Rick and Stephen, come out with a replacement tyre. A two and a half hour delay, but still time to load 9 pallets of organic pet food at a remote mill near Murdock. Healthy nutriution for rabbits, guinea pigs, chinchillas and rats.


____Day 6: A Wednesday morning with 550 miles of Interstate 29 to do; north from Sioux Harbor, Iowa. My toe-nails need cutting, but before I can get a sock off; it starts to rain. Freezing rain, the one thing that strikes fear into the heart of every articulated vehicle driver. The twitching of the drive-tyres corresponds to the twitching in the seat of my pants. I back-off the throttle and run a high gear at very low revs, trying to maximise the traction. I'm trying to remember if the next exit has a truckstop; when a wreck on the southbound carriageway causes a bump on the northbound and everything slithers to a halt. Eventually a gritter comes along and everyone is content to follow along behind it. The rain turns to snow; with flurries all the way home.
____Overall Distance: 4686 km.