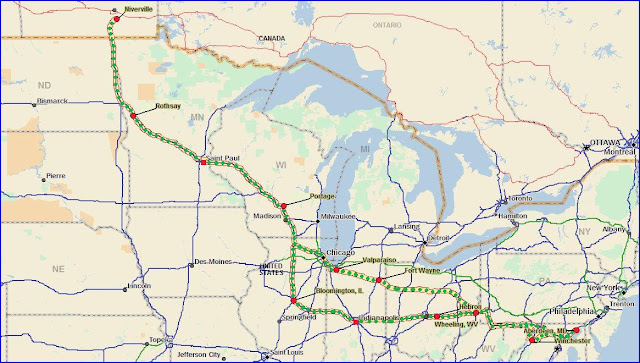 ____Day 1: A heavy load of flour to go 2700 kilometres and be delivered by the third afternoon. So, to Portage in Wisconsin and 1100 kays out of the way by the end of the first day.
____Day 2: Another four figure addition to the speedo, to the TA at Hebron in Ohio. Making the most of a strong tailwind and the flat terrain of the Mid-West. Compacting the working-day, to give an early start after the 10 hour daily rest.


____Day 3: A day short on mileage but big on hills. The Rocky Mountains may have spectacular scenery and greater altitudes, but the Appalachians are more demanding to drive. An endless multitude of short sharp climbs and descents; with the National Freeway, Interstate 68, being a true test of a drivers ability with the Eaton Fuller 13 speed, constant-mesh transmission. Lightening-fast, clutch-less gear changes are needed to keep the Cummins humming on the undulating highway that starts at the eastern edge of Ohio and stretches to the Atlantic coastal plain at Baltimore. Busy traffic on the Interstate 95 also slows the last leg of the trip, but it's a good quick delivery at the bakery in Aberdeen; which gives me enough time to do the 200 kilometres towards the re-load.


____Day 4: "Winchester" can bring to mind the English cathedral city or the repeating rifle; but to me "Winchester" is always the private drinking club where Arthur Daley and Terry used to drink, in the programme: "Minder." Drink is the reload from Winchester, but fruit drink; the tiny cartons with the bendy straw stuck to the side that kids get in their lunch boxes. Like the flour millers of Manitoba, the fruit drink manufacturers of Virginia, know just how much product they can put on a truck and still stay legal. The rig is loaded to just below the 80,000 lbs limit. Another slog through the Appalachian Mountain chain, before I make the bad choice of Highway 250. North-west out of Wheeling, West Virginia, along a steep, narrow and twisting two-lane camel track before coming out at Amish farmland in Ohio. A photo opportunity to add more pictures to the folder named: " Blurred Black Buggies."


____Day 5: Valparaiso, Indiana, was a good resulting destination and  another four-figure kilometre count took me through to the small Minnesota Truckstop at Rothsay. The trip continued it's pattern of eat-sleep-drive and not much else.


____Day 6: Six days on the road and I'm gonna make it home tonight. The last five-hundred kilometres in less than 5 hours, getting back to the yard  just before Midday on Sunday. A non-stop trip and not my preferred way of doing things; but good mileage and good pay should not be moaned about.
____Overall Distance: 5557 km.