Chrome Shop Mafia and the Son of Iowa 80. 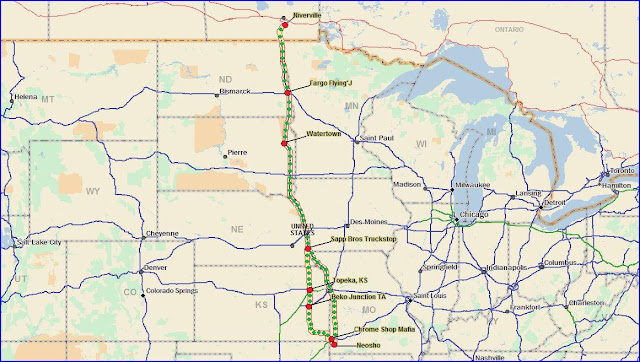 ____Day 1: " What have I done now?" is my normal reaction when I get an incoming call from a stranger who knows my name. Just south of the border; but no need to worry. It's Ann, a nice lady from the Pilot/Flying'J Challenge Magazine, phoning to say that I have won a Garmin Sat-Nav. Winning the quarterly prize in the Garmin Gallery Photograph Competition. It puts me in a much better mood, after I had spent an awful long time trying to get the trailer axles slid into a legal position. A load of flax seed, as far as Sapp Bros at Percival on the Iowa/Missouri border.


____Day 2: An early start that gets me down to the animal food plant at Neosho before Midday. Unloaded and despatched to Topeka for a ten o'clock loading appointment, the next day. Plenty of time to go along to Junction 4 on Interstate 44 and visit the Chrome Shop Mafia. The place to go if you have a truck customising project, a long shopping list and plenty of cash. Not a place with much for the average trucker looking to add a couple of shiny bits to a company truck. But just a short walk to somewhere with plenty of bling; Joplin's Petro Truckstop and the new Supertruck Showroom. Similar in style to the Worlds Greatest Truckstop, Iowa 80. Two hours of wandering about before heading north to the TA at Beko Junction; where it rained all night.


____Day 3: Coffee cup lids, from back to front and from floor to ceiling, all going to Winnipeg. US Highway 75, north to Interstate 29 and as far as Watertown for a night at Stone's. A night of free beer; as a short wiry guy from Arizona, with long beard and longer hair, insists on buying all the rounds, all the time, for everybody. Straight out of ZZ Top; he holds court, plays the harmonica and has us all in stitches with his endless story telling. At $2.25 a bottle and only four in the audience; it didn't cost him a fortune. The others called him "Zee-Zee." I resisted the temptation to call him "Zed-Zed."


____Day 4: Up and away, later than intended, it doesn't matter as I'm only returning for a 36 hour log re-set and doing nothing in particular. The new girl friend is out of town; spending the Easter weekend at her mother's. Mustn't grumble; at my age, I'm lucky to pull something that's young enough to still have living parents. I pop into the Flying'J at Fargo to pick-up the sat-nav prize; getting back to the yard at two in the afternoon.
____Overall Distance: 3310 km.