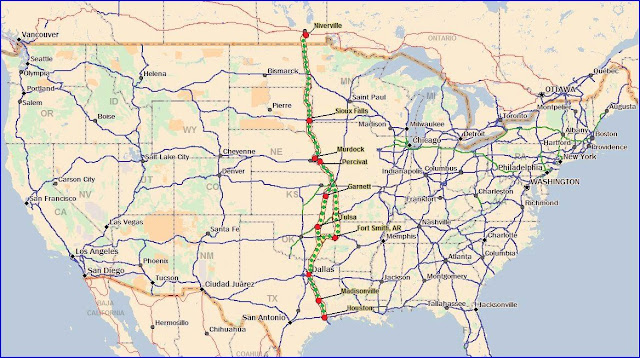 ____Day 1: It’s a logical decision for Caterpillar to target the construction industry for sales of their new highway trucks. Brand loyalty from the earthmoving customers should give them a foot-hold in the market. My first sighting of the new marque is a day-cab four-axle tractor unit, pulling a bottom-dropping aggregate tri-axle trailer, as I’m southbound on Interstate 29; heading for Texas with peat-moss on a Sunday afternoon.


____Day 2: The 1100 kilometre run from Niverville to Sapp Brothers Truckstop at Percival, Iowa, is followed by another eleven hundred down to Corsicana, south of Dallas but still a couple of hours short of my destination at Madisonville.
____Day 3: The mushroom compost making facility  doesn’t want to see any peat-moss deliveries before eleven o’clock; which suits my logbook as I cannot start before nine. But it also means that my reload in Houston will have to wait until Wednesday morning. A lot of factories in the sweltering hot southern states prefer to start work at 5 or six in the morning, when it is cool and pleasant, but this means that they finish at two in the afternoon. I’m parked-up in Houston’s  bustling Flying’J by three-thirty.


____Day 4: Seven pallets of aluminum foil [ very similar to aluminium foil ] loaded by 06.30 with instructions to head up to Dallas as the office searches the data boards for more freight. It’s early afternoon before  a roof-top air-conditioning unit  is found that needs to go from Fort Smith in Arkansas to Rockyview, Alberta. Again, not enough time  to load before the next day.


____Day 5: Eight hundred kilometres between pick-ups one and 2, now 750 km between two and three; the likelihood over another over-night wait. But I go for it; just stopping for a splash and dash of fuel and coffee. It’s the organic pet-food collection at Murdock, Nebraska, a job I know. So straight into their yard; sling the doors open; slam it onto the loading bay; sling on 12 pallets and away by four-thirty.


____Day 6: There was enough time to get as far north as Sioux Falls on Thursday evening so Friday is an easily manageable homeward run on Interstate 29. Back in the yard by two-thirty, where the trailer is de-vanned for onward Alberta-bound trucks.
____Over Distance: 5250 km.