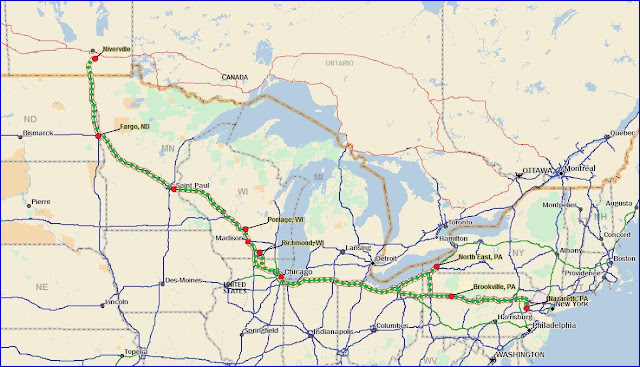 ____Day 1: Megan's Moose Meatloaf made me postpone the departure to Pennsylvania until the Saturday morning. Then it was the full 11 hours down to Portage in Wisconsin; driving made easy by a payload of only 20,000 lbs. Breaking the day, halfway, at Sauk Centre with a couple of Searcy drivers.

____Day 2: Starting in the darkness brings on black thoughts; horrors of Regional Distribution Centres, for I am heading for a RDC in Nazareth, Pa. Waitrose, Bracknell: gobbing in the general direction of some quality control Hitler; banned. Tesco, Snodland: hurling a bleeper against the wall after waiting five hours for them to count some cut flowers; banned. Asda, Wigan: rowing with some under-manager who promised to get me sacked; luckily I'd booked in under the name of Kray and heard no more. Tesco, Didcot: driving my truck when a fire alarm was sounding; banned. It rains all day, all the way to the TA at Brookville.

____Day 3: Still 250 miles to go for the 11.00 am appointment, so another early start on another rainy day. The RDC wants $ 120 for unloading 60 pallets but I take the option to do it myself. The electric pallet truck gives up with four pallets still on the trailer but one of their guys finishes the job for nothing. Reload is from North East, Pennsylvania, 300 miles away and in the morning; so it's back to Brooville for another night.

____Day 4: My load of pallet racking is numbered at 23; for a mighty big warehouse at Calgary, Alberta. 30,000 lbs of long steel frames pushed into the trailer. Then it's west on Interstate 90, through Cleveland, Toledo, Chicago, ending at Richmond and 650 miles for the day.

____Day 5: Rain, everyday this trip, and through to Fargo and the North Star Truckwash. A wash in the early evening and hopes that dry roads will get me back to Niverville with the rig still looking clean.
____Day 6: More rain, but it doesn't mess up things too much. Through customs and back in the yard before noon.
____ Overall Distance: 5373 km.