Shortest Trip of the Year 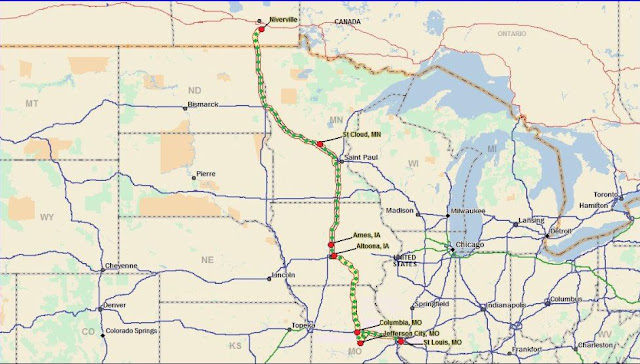 ____Day 1: First drop is just 6 hours away; so no need to leave early and when I do set off it is with Flying Eagle 31 and 32 in convoy. We both have three deliveries of cardboard and both of us start with the same place at St. Cloud, Minnesota.


____Day 2: Paul is unloaded first but stays to help me handball-off my third of a trailer. He then sets off for Fort Wayne, Indiana, and Manassas Park, Maryland. A lot more miles than my deliveries at Columbia and St. Louis in Missouri. But the second drop is 545 miles away and will be closed before I get there. So it's fuel and a shower at Altoona, followed by a cross country run on Highways 163 and 63.


____Day 3: Despatching trucks with the benefit of hind-sight is so easy for a driver and annoys the hell out of the office. After delivering to Columbia and then St. Louis; I have to back-track to Jefferson City for the reload. Why didn't they send me to St. Louis first and I would have saved two hours driving and gallons of diesel? Quickly loaded with electric transformers; I retrace my wheel tracks to Ames, for a night on an Interstate 35 Rest Area.


____Day 4: Over a thousand kilometres from home but with only 24,000 lbs and a tail-wind; it's an easy day. Running the last stretch of Interstate 29 with old Big Freight colleague, Terry Fennell, who after five years with the big green machines is starting as a truck-driving instructor in the New Year. Good luck with your new career, Terry.