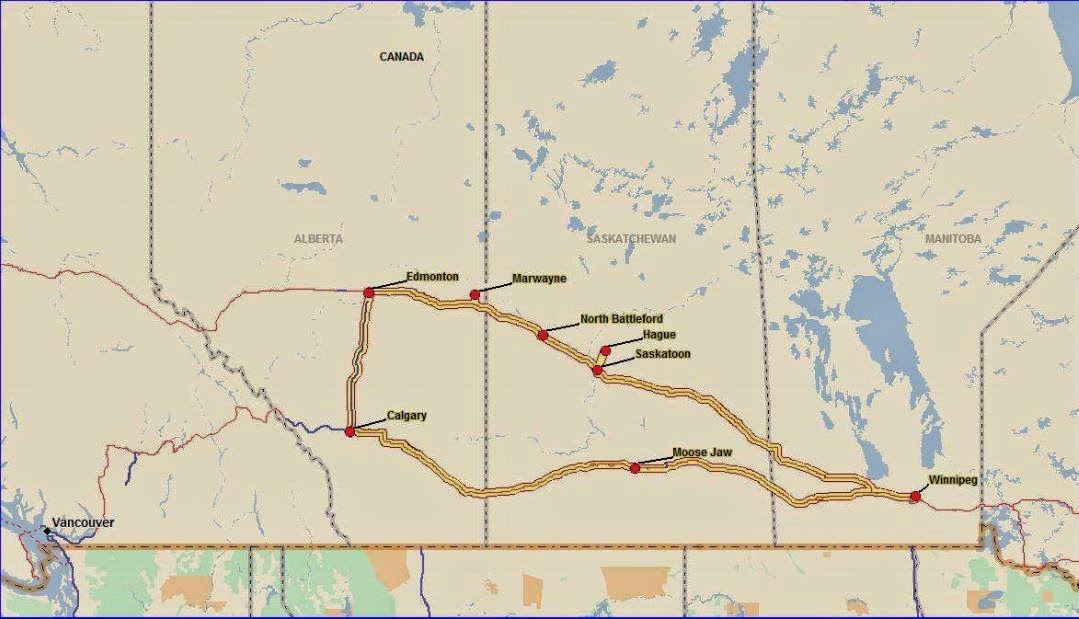 ____ A continuation of last weeks trip with the reels of cable. Two drops in Calgary, with the first delivery scheduled for 06.30 Monday morning. That will be a Saturday afternoon start then. Moose Jaw cuts the distance in half; an early finish in Calgary gives me enough time to go to the casino and make it an expensive day.


____ Only 4 kilometres between the drops and I'm having breakfast at the Petro Pass, up near Calgary Airport at eight-thirty; empty and ready to wait for my next assignment. Mid-day and a message arrive together; load in Edmonton, in the morning, three drops Alberta and Saskatchewan. Not the real mouth-watering miles that I was expecting as all the waiting around makes me wonder if I'm getting over-looked for the good earning opportunities or if good work is scarce because of the holiday season.


____ Loaded and away early Tuesday with plastic film in rolls and on pallets. White plastic that the agricultural industry will use to wrap hay-bales, cover silage mounds and store grain in long white bags that lay in the fields. First drop, Marwayne, and thank heavens for cell-phones. Getting hold of hard-working farmers and arranging a rendezvous has never been so easy. As the address on the paperwork was completely different to where the farmer wanted the stuff; I could have wasted half-a-day. Instead, I was in and out in 15 minutes; including a conversation about unsold grain that was still in the farmer's grain bins, the shortage of rail-cars for grain-trains and about how white plastic would save this year's harvest.


____North Battleford; this time an "Ag" merchant. Not enough time to get to the last drop at Hague; so into the Flying'J at Saskatoon. The fourth night of the trip and the fourth 'J; Moose Jaw, Calgary, Edmonton and now the Toon. Not an exciting variation but probably the best showers available at those locations.

____Empty at Hague; then because the rental trailer is going "Off-Hire" at the end of the month; empty back to Winnipeg. The longest day of the trip; where all the others had been of eight hours or less. Nice, laid-back, easy-going trip of 3335 kilometres; back Thursday night, going out again Sunday and earned fuck-all.
Posted by chris arbon at 9:41 AM