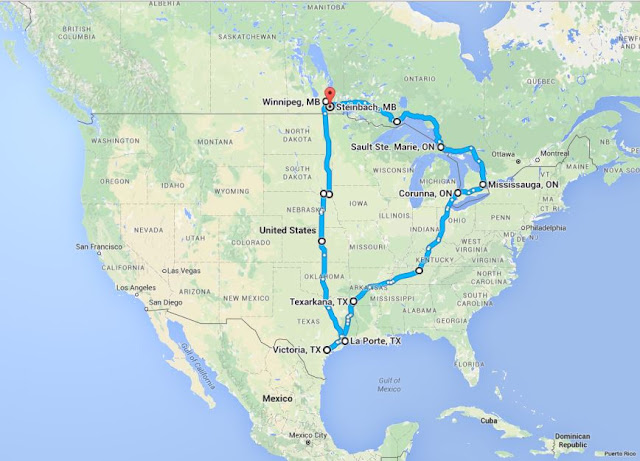 ____ An 11 day trip that flew out of the blocks and then kept ticking over. Two days to get from Steinbach to Mississauga needed the extra driving time allowed by Canadian regulations and then I needed the short eight hour break to get the pizza boxes into the food services distribution depot on time. Next job loads the next morning from Corunna, just a stones throw from the US border at Port Huron. A load of resin for Victoria, Texas. 2600 kilometres to drive over the weekend. Fully loaded but not a serious hill along the way.

____ Cruise control and no problems until Texarkana; when the  drive axle suspension collapses during a set of road-works. I drag it through the cones and crawl underneath; expecting the worse. But it is only a dislocated connecting rod; the one from the ride-height sensing valve to the air-bag support beam. I wind round most of a roll of electrical tape and it holds together for the rest of the trip.

____ The delivery at Victoria is to a vast petro-chemical complex, the size of a small village. I have to watch a film show and answer questions before I am allowed in. Even then I have to wait for an escort to  the unloading bay. But during this time a reload offer arrives; resin from La Porte, Texas to Winnipeg. If Victoria is a petro-chemical village then La Porte is a oil industry capital city. On the eastern outskirts of Houston; Highway 225 is a never ending refinery and warehouse corridor. Loaded and away to a nearby Loves Truckstop to scale in the evening rush-hour.

____ Now, driving hours are becoming short and the weather is hot. The best time of the day is the cool of the early mornings, the worst is the four o'clock hour in the afternoon. From Huntsville to Oklahoma City in the five hours of allowed driving on the Tuesday. But then the two big days come back and I'm up in Winnipeg by Thursday evening for the Friday 0630 delivery. Eleven days and 7609 kilometres.
Posted by chris arbon at 10:08 PM